“While overall levels of investment have remained stable, there have been dramatic changes in how investment is distributed between regions and countries around the world, as companies seek to adapt their corporate footprints to new opportunities and operational risks emerging across the globe...Costa Rica [this year’s top destination by jobs per million inhabitants] has received considerably higher levels of foreign investment in business services and life sciences. Jamaica is fourth as a result of a large business process outsourcing (BPO) investment, while Singapore experienced a decline of more than 30% and is now sixth.” 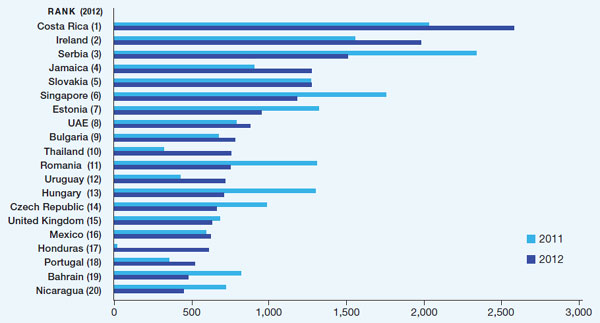 Note: Countries with less than 1 million population were excluded from the analysis

The World’s Richest Countries, Based On Gross Domestic Product (PPP) Per Capita 2009-2013