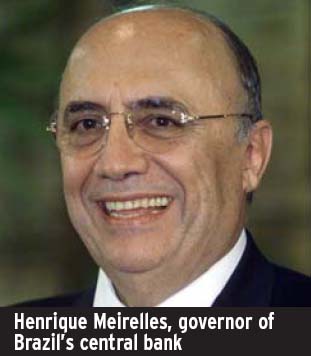 Despite positive news surrounding Brazil’s economic recovery, analysts predict the boom will soon be tempered. GDP growth, likely to end 2004 at 4%-4.5%, is expected to come in at a more modest 3.5% in 2005, as a result of monetary tightening, high oil prices and a potential global economic slowdown that will not bode well for Brazilian exports. Growth will be supported by recovering income levels and new investment flows. During a Latin American tour in November, Chinese President Hu Jintao pledged up to $8.5 billion investment.
The government continues to get high marks for its economic policies.An IMF delegation recommended approval of the ninth revision of its agreement. If approved, Brazil would qualify for another $1.4 billion tranche, but is unlikely to use it. It has not made any withdrawals after recent reviews.The government does not expect to renew its IMF pact next year but vows to continue posting primary surpluses.
A frequent issuer on international capital markets in dollars, the Brazilian government has decided to launch its debut eurobond issue denominated in reals—setting a new benchmark. Rumors in November were for the sovereign to come to market with a five-year deal for the equivalent of $350 million.The strategy should further boost hard currency reserves, as local currency deals will help reduce dollar debt exposure.
Not all is well for President Luiz Inácio “Lula” da Silva, however.The government’s political coalition is showing signs of deterioration, as members have threatened to withdraw over controversy surrounding central bank governor Henrique Meirelles. Political leaders are up in arms over Lula’s proposal to elevate Meirelles to a ministerial level. Meirelles, currently involved in a scandal over alleged tax evasion,would receive partial immunity as a cabinet member.
—Santiago Fittipaldi 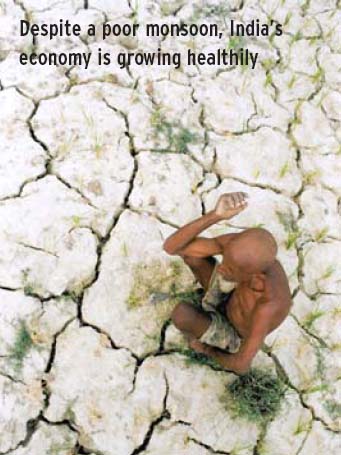 The Indian economy has been on a fast growth track for the past few quarters. Despite the recent poor monsoon, the latest economic growth indicators continue to look positive. More importantly, the mood in corporate India is buoyant and optimistic.
According to the half-yearly Business Outlook Survey conducted by the Confederation of Indian Industry (CII), the period from October 2004 to April 2005 is expected to show significant investment activity from domestic industry.The survey showed that 83% of the 210 companies covered across various manufacturing sectors are looking at additional capital investments in manufacturing capacities in the next six months.
This increased investment expectation from the Indian corporate sector is linked to their overall improved perspective on the business climate.Nearly 80% of the companies surveyed expect an increase in manufacturing orders, while 65% said they saw a continuation of high-capacity utilization.
Infosys Technologies, one of India’s best-known companies, is also exhibiting clear signs of optimism. India’s third-largest software exporter is launching its third and largest ADS issue yet, listing another 16 million shares on the Nasdaq.With each ADS valued at $65, the sale should raise a little over $1 billion.
Unusually, the entire issue is an offer for sale, where existing domestic shareholders will tender their shares to foreign investors; there is to be no fresh issue of capital.The aim is to increase liquidity in the Infosys ADS, which already trades at a 50% premium over the stock price in India. Currently just 8% of Infosys stock is owned by ADS holders, which will rise to 14% post issue.
Reaping the benefits of its Indian investments, GE has sold a 60% stake in its privately held Indian BPO company GE Capital International Services (GECIS) for $500 million to two private equity firms. GECIS is the single largest BPO operation in India, with more than 12,000 employees and revenues of $420 million. So far the company has been offering captive services to GE group companies worldwide. With GE cashing out a part of its stake, the company can now also offer services to other companies.
—Aaron Chaze