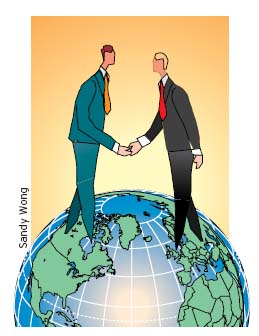 There has been a noticeable pick-up in cross-border mergers and acquisitions in recent months that could signal the beginning of a sustained rise in international takeovers, bankers and analysts say.
In October alone, there were six major M&A; transactions in which a company in one country acquired the assets and operations of a company in a different country.
The reasons for these cross-border takeovers vary, but their increasing numbers suggest that conditions are ripe for a wave of such deals as global competitive pressures intensify.
Much of the increased cross-border M&A; activity this year has involved companies from the US and Europe, but such deals are also becoming more common in developing countries, which are beginning to liberalize their trade and investment markets.
European companies have dipped into the US market to make acquisitions 239 times in the first nine months of 2004, buying up companies with a total value of $14 billion, according to Thomson Financial Securities Data. In the same period of 2003, European companies announced 213 such deals valued at $8.3 billion.
With the euro rising to record highs against the dollar, European companies have enjoyed a steep increase in their buying power in the US.Thus, it is not surprising, analysts say, that European companies are discovering attractive US acquisition targets.
What is surprising, however, is the even-bigger rise in the number of US companies buying up European companies in the first three quarters of 2004, despite the weaker dollar and the slower-growing economies in Europe compared to the US.
There were 526 USbased company acquisitions of European companies announced between January 1, 2004, and September 30, 2004, according to Thomson Financial.That was up from 472 such deals in the same period of 2003. The aggregate value of the US-based purchases of European companies in the first nine months of this year was $44.9 billion, almost $11 billion more than in the first three quarters of last year.
“The level of crossborder acquisitions doesn’t seem to be related at all to the level of various currencies,” says Richard Peterson, chief market strategist at Thomson Financial in New York.
The number and value of international transactions doesn’t rise or fall depending on whether the dollar is weak or strong, Peterson says. 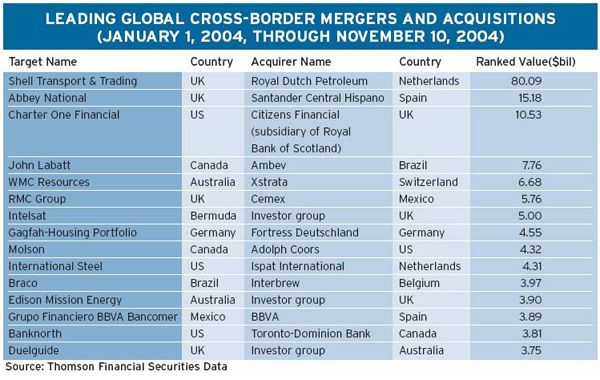 Companies usually pursue cross-border acquisitions for strategic and competitive reasons. Such transactions often are horizontal M&As; between competing firms in the same industry. 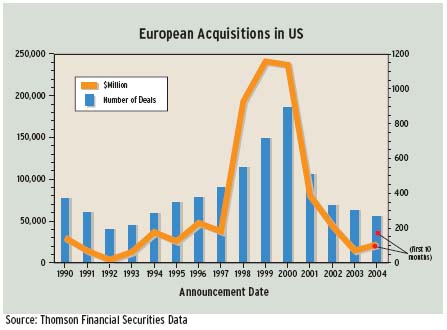 In the past 25 years, there have been two major waves of surging cross-border M&A; transactions.The first wave was in the late 1980s, and the second big crossborder buying spree was in  the latter half of the 1990s. During both of these periods, the global economy experienced relatively high economic growth and there was widespread industrial restructuring, according to the United Nations Conference on Trade and Development.
Cross-border M&A; trends closely follow developments in total worldwide M&A; activity.The share of crossborder deals has remained remarkably steady at about one-quarter of the total. In the first nine months of 2004, cross-border deals accounted for 26.3% of all M&A; deals completed worldwide.
“A pick-up in the global economy is the main reason for this year’s rebound in cross-border M&A;,” says Karl P. Sauvant, director of Unctad’s investment division in Geneva.
“Such transactions are playing an increasingly important role in the growth of international production,” he says.
The value of cross-border M&A; has been the key driver of foreign direct investment flows since the late 1980s.
“World FDI flows have seen a dramatic shift toward the services sector—that’s where the action is,” Sauvant says.
While FDI in the services sector has traditionally been concentrated in trade and finance, there has been dynamic growth since 1990 in such investment in electricity, telecommunications, water services and other business services, he says.
Unctad is forecasting a rebound in FDI this year in developed and developing countries alike, led by strength in China. Unctad’s World Investment Report 2004, released in September, said such optimism is justified by surveys of companies and location experts early this year. Meanwhile, corporate profits are continuing to rise, along with sales and employment, Sauvant says.This could encourage multinational companies to increase their capital spending. 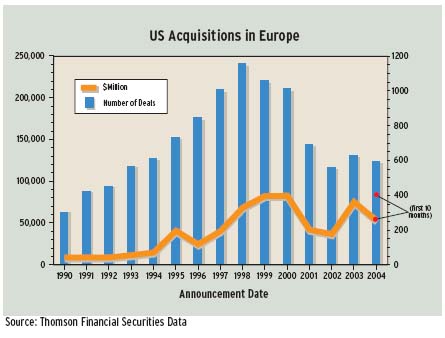 Unctad maintains a database of all crossborder M&A; transactions involving more than 10% equity capital since 1987, with input from Thomson Financial.The value of cross-border M&A; was down 20% last year, following evensteeper declines in each of the previous two years, according to Unctad.
The first signs of a rebound were seen in the first half of 2004, when cross-border M&A; rose 3%, Unctad says. Thomson Financial’s more-recent data show a much larger increase.
The top six crossborder deals of the year were announced between July and September, says Peterson of Thomson Financial.The global volume of overall M&A; activity in the third quarter of 2004 was up 35% over the third quarter of 2003. The biggest cross-border deal of the year to date, as of the middle of November, was the proposed merger of Royal Dutch Petroleum of the Netherlands with Shell Transport & Trading of the UK to form a single parent company.
According to Thomas Financial, the deal was valued at $80.1 billion. Dealogic, another data provider, failed to give credit for the transaction to investment bankers, however, saying that it was a restructuring and not a change of economic interest.
Royal Dutch/Shell proposed to simplify its corporate structure through the full merger of its Dutch and UK holding companies to help settle internalcontrol issues related to the booking of oil reserves.
The second-biggest crossborder deal also involved two European companies. Abbey, the second-largest mortgage lender in the UK, agreed to a takeover bid of more than $15 billion from Santander Central Hispano, Spain’s largest bank.
If this transaction proves successful, it could trigger other cross-border bank mergers in Europe, analysts say.
The leading transatlantic takeover of the year to date was Royal Bank of Scotland subsidiary Citizen Financial’s acquisition of Cleveland, Ohio-based Charter One Financial in a deal valued at $10.5 billion.
One factor that is contributing to increased M&A; activity is the increasing importance of private equity deals, bankers say.
Private equity funds have become major acquirers of non-core assets and even public companies in both the United States and, to a greater extent, in Europe since 2001, says Paul Gibbs, managing director and head of M&A; research at JPMorgan in London.
The major drivers of private equity M&A; volume remain in place, he says. European companies in particular are in a divestiture mode, with no sign of slowing in sales of non-core businesses to raise cash. Meanwhile, private equity firms have more than $150 billion of cash available for takeovers in the US and Europe, Gibbs says.
Frank Yeary, co-head of global M&A; at Citigroup, says the cross-border M&A; business is growing significantly faster than overall M&A; activity, which also is expanding at a healthy pace.
“Our data show that after three consecutive years of declines in cross-border M&A;, this year’s totals so far are up 40% year-on-year,” he says.
The Citigroup executive says the increased activity has been driven in part by private equity funds seeking to take advantage of investment opportunities. Such funds now account for more than 20% of total M&A; volume in the US and Europe, he says.
“Another reason for the increased cross-border activity is the emergence of non-Group of 7 countries buying into the Group of 7,”Yeary says.
Mexican cement maker Cemex, for example agreed in late September to buy British building materials firm RMC for $5.3 billion including debt.
“China, in particular, is using its capital surplus to reinvest in M&A; activity in commodities to secure global assets to sustain its economic growth,”Yeary says.“China has walked onto the global M&A; scene.”
The current wave of cross-border M&A; deals is not only being driven predominantly by transatlantic activity, as were the two previous periods of frenzied buying in the late 1980s and 1990s,Yeary says. This increase is more geographically distributed and includes China, India and Latin America, he says. 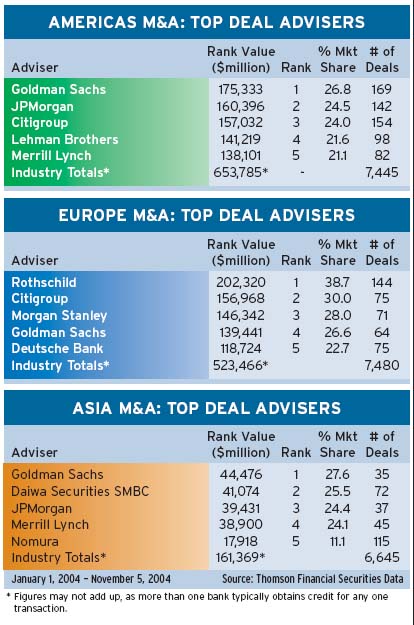 The growing proportion of M&A; deals that are settled in cash makes it easier to buy outside of a region, he adds.
Companies around the world have fixed their balance sheets and are generating excess cash. Flush with cash, they are more eager to consider acquisitions.
Another spur to crossborder activity could come from the European Union’s adoption in May of the Directive on Takeover Bids, which aims to harmonize takeover law in the EU. In theory, this could make it easier for transatlantic acquisitions to occur.
Konstantine Guenther, M&A; partner in the Duesseldorf, Germany, office of international law firm McDermott Will & Emery, says true harmonization is unlikely, however, because the directive still has to be implemented in each member nation.This must occur by May 2006.
“In my view, Germany and the Scandinavian countries will opt out of Articles 9 and 11, and France may as well,” Guenther says.
Article 9 of the directive governs the ability of target companies to frustrate takeover bids without first getting shareholder approval. Article 11 enables acquiring companies to break through certain restrictions on bids to achieve full control of another company.
“The directive is a minimum-standards directive and includes very little detail,” Guenther says. “Some countries may adopt stricter rules than others.”
Ultimately, the directive could have some effect on anti-takeover law in Germany, Guenther says. It could become easier to squeeze out minority shareholders, for example, he says.
Regardless of the outcome of Europe’s takeover debate, the trend toward increased crossborder takeovers is already apparent in the data.
As globalization continues, and multinational companies seek to increase market share, eliminate competitors, or gain control of suppliers the stage is set for a third wave of rising cross-border M&A.;