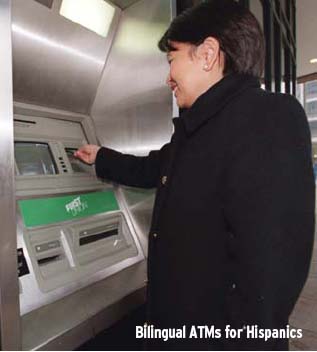 Anyone who has called a US bank’s call center recently has heard the ever-popular command of “Press 1 for English, Press 2 for Spanish.” It seems banks have finally discovered the US Hispanic market.
The 40 million Hispanics in the United States make up the country’s largest—and fastestgrowing— minority, and their numbers are expected to triple by 2050. Hispanics’ purchasing power is already $600 billion and is predicted to hit $1 trillion over the next decade.
Yet studies suggest that less than 30% maintain banking relationships. By some accounts, 70% of the growth in new US financial services over the next five years will come from Hispanics. So far, banks are boosting bilingual staffs, introducing bilingual ATMs and launching Spanishlanguage websites and ad campaigns.
Remittances are the first step in getting Hispanics in the door.The Inter- American Development Bank predicts they will have sent some $30 billion back to their countries of origin this year. By providing lower fees and faster service, banks not only take market share away from Western Union and MoneyGram but also create a crossselling opportunity.
Bank of America is a case in point. It offers Hispanic clients its SafeSend debit cards that allow them to deposit funds in the US for withdrawal by relatives in Mexico. If they sign up for SafeSend, they also get monthly savings and checking fees waived on their “Nuevo Futuro” combined accounts.
Spain’s BBVA wants a piece of the tortilla. After acquiring California’s Valley Bank last year, it has acquired Texas’s Laredo National Bancshares financial group, giving it an entry into the two states with the highest concentration of Hispanics. Puerto Rico’s Banco Popular, already the largest Hispanic-owned US bank, is also bracing for competition from several Hispanic-owned startups.
As they continue to seek growth opportunities, it appears US and foreign banks alike will soon be rolling in “dinero.”
— Santiago Fittipaldi 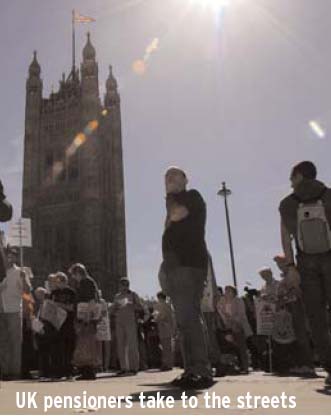 Europe’s institutional investors should not be lulled into a false sense of security by the sizeable donations corporate pension plan sponsors made last year, says consultancy Greenwich Associates. Greenwich Associates’ Chris McNickle commends European plan sponsors for acting responsibly following the crises of 2000 to 2002 but says conservative asset allocation means more than a third of continental European pension funds don’t hold enough assets to fully fund estimated future benefit obligations.Aging workforces in these countries will also continue to increase liabilities.The findings form part of Greenwich Associates’ 2004 research on continental European investment management, which analyzes trends in institutional funding ratios, asset mixes and investment strategies and contrasts it with data for the UK market.
According to McNickle, as plan sponsors on the continent are more dedicated to their final salary plans than other markets, European institutional investors need to keep on their toes, increasing investment returns in order to meet future obligations. Some investment managers have taken “radical” steps in terms of readjusting their asset allocations, but Greenwich’s research indicates that many failed to follow through on previous promises, specifically in terms of increasing allocations to equities and alternative investments. “For three years in a row, plan sponsors and other institutional executives on the continent have been saying that they were going to make much more use of this high-alpha class of assets, but when it came time to put the chips down, many lost their nerve,” says McNickle.
According to Greenwich, European government bond allocations declined to 25% of overall institutional assets at the end of 2003, compared with 27% the previous year.However, European allocations to private equity only amounted to 1% of total assets in 2003, and overall allocations to hedge funds remained flat at approximately 1%. Last year, institutions reported that they intended to increase equity allocations.Yet, McNickle says, this didn’t happen for the most part as many sold off equities to balance prior losses. Despite a 30% increase in the performance of the world’s stock markets last year, McNickle says the overall proportion of equities in a “typical continental institution’s portfolio” increased only slightly, from 20% at the end of 2002 to 22% at the beginning of this year.
— AH