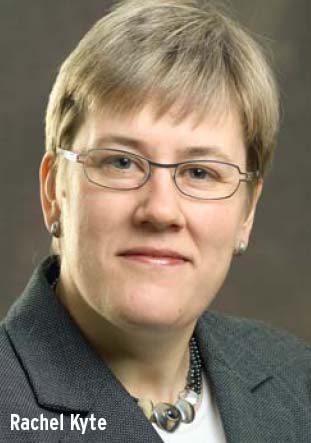 The IFC refutes claims that its review of environmental and social safeguard policies constitutes a watering down of current standards and that the consultation process is “deeply flawed.” In an effort to make its current safeguard policies, which form the basis of the Equator Principles (see article, page 17), clearer, concise and more comprehensive, the IFC proposes replacing them with a set of nine “performance standards,” which include a more comprehensive treatment of labor rights, community health and safety and biodiversity.
Following publication of the draft policy and performance standards in August, the IFC has given local stakeholders, Equator banks and nongovernment organizations (NGOs) until mid-December to comment on the new standards.
However, some NGOs claim that four months is insufficient for a worldwide debate, saying they have yet to see implementation guidelines, which are either unavailable or not translated into local languages.“They [the IFC] are trying to rush this through,” says Johan Frijns, coordinator of BankTrack, an international network of advocacy groups, some of which have boycotted regional consultation meetings. “If they are serious about engaging affected communities, we need to translate documents into the local language,” he adds. NGOs say the wording of the draft consultation suggests a shift from mandatory compliance to a “discretionary” approach. “Safeguard policies are meant to safeguard those that are affected by IFC decisions,” Frijns continues. “Performance standards suggest discretionary measures, which is a different thing.”
Equator bank ABN AMRO also expressed concern.“We don’t want a set of broadly defined performance standards where disputes can arise,” says Richard Burrett, global head, sustainable development,ABN AMRO.
Rachel Kyte, director, environment and social development department, IFC, says no one had provided evidence of how the standards constituted a weakening of current policy.“In many cases what people are saying is that by clarifying aspects, it gives the impression of being stricter,” she says.As the IFC had already gathered volumes of information in terms of what worked and what didn’t work with its current safeguard policies, Kyte says four months for consultation was sufficient.
— Anita Hawser
UNITED STATES
TREASURY SECRETARY’S STRONG-DOLLAR MANTRA STRIKES A DISCORDANT NOTE 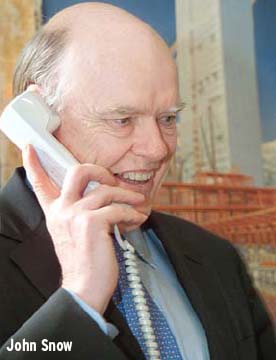 Every time the dollar takes a particularly bad stumble on the foreign exchange markets, which has been quite frequent lately, treasury secretary John Snow reiterates the Bush administration’s official policy mantra.“We support a strong dollar.A strong dollar is in America’s interest,” Snow says. And then the dollar declines some more. Under the Bush administration, the greenback has lost more than 20% of its value on a trade-weighted basis.
After the dollar hit another all-time low against the euro last month, Snow told reporters that cur rency values are best set in open and competitive markets. “Efforts to impose non-market valuations on currencies are at best unrewarding and checkered,” he said.
In other words, the US is not about to join the Europeans or anyone else in a joint intervention to manage the pace of the dollar’s decline, which hasn’t been disorderly—at least not yet.
Only when the dollar’s decline leads to a major sell-off in the US treasury market or the stock market will the US respond with currency intervention, analysts say. Meanwhile, the weaker dollar is helping to boost US exports to record levels, which is keeping the trade deficit from widening even further.
Because the weaker dollar is the only way, short of pushing the economy into recession, for the US to alleviate its trade imbalance, market participants don’t really believe Snow when he says the US wants a strong dollar.Asked after a speech in London last month why the US continues to support a strong-dollar policy in public, Snow replied, “Because it’s our policy.”
Currency market analysts at Brown Brothers Harriman in New York said in their note to clients that same day: “We wonder what Treasury will say when—and if—it really would prefer a strong dollar.”
—Gordon Platt