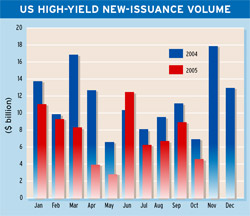 Ford Motor Credit offered yields of 4.375 percentage points more than comparable-maturity US treasury securities for its $500 million of five-year notes.

The 5.5-year notes of General Motors Acceptance Corporation, or GMAC, the financing unit of General Motors, were yielding only about 2.6 percentage points more than treasury securities in secondary market trading on the same day.

GM’s bonds have performed better than Ford’s in the secondary market in recent weeks, after the world’s largest automaker announced a significant cost-cutting agreement with the United Auto Workers union that will help lower its health-care costs. Ford is expected to announce a similar agreement with the union eventually.

According to GM’s chief financial officer, John Devine, the tentative agreement will lower the automaker’s retiree health-care expenses by about 25%, or $15 billion, over seven years. GM also plans to eliminate 25,000 manufacturing jobs and close several plants by 2008. It also announced that it would sell a controlling interest in GMAC.

GM and Ford are two of the largest issuers of corporate debt, with a total of about $475 billion outstanding, including the bonds of their financing units.

Both of the leading US automakers reported big losses for the third quarter, and Ford said it would announce significant US plant closings and layoffs in January.

Besides high health-care costs, US automakers have been hurt by rising costs of raw materials, excess capacity and intensifying competition from Asian carmakers.

William Clay Ford Jr., chairman and CEO of Ford Motor, says the restructuring plan he will announce in January will apply to salaried workers as well as hourly workers represented by the union.

“This is not a sacrifice that we will ask only the UAW and its members to share,” he said in a conference call after Ford reported a third-quarter loss of $284 million.