Interest-rate rises are like vitamins for the dollar, which jumped to its highest level in two years in November and which will continue to flex its muscles in the months ahead, currency analysts say.

Although European policymakers are moving closer to hiking rates on the Continent, the United States is expected to maintain a wide advantage in rate differentials for months to come. And the same holds true for US rates compared with those in Japan, analysts say. “Judging by the trading level of federal funds futures, US short-term interest rates are expected to climb to 4.75% by the end of the first quarter of 2006,” says Marc Chandler, global head of currency strategy at Brown Brothers Harriman in New York.

Virtually nobody was surprised when the Federal Reserve raised interest rates another quarter of a percentage point to 4% on November 1, for the 12th straight rise since June 2004. “Price pressures are evident in the US economy, and the Fed will likely raise rates by a quarter point at their December 13 meeting,” Chandler says. Another quarter-point increase is likely, he says, at the Fed’s two-day meeting on January 30-31, 2006, the last Federal Open Market Committee meeting to be led by chairman Alan Greenspan.

When Ben Bernanke succeeds Greenspan as Fed chairman and heads his first FOMC meeting on March 28, 2006, the new Fed chief likely will want to establish his anti-inflation credentials and to continue the gradualist approach of his predecessor by raising rates another quarter point, Chandler says. Meanwhile, the European Central Bank recognizes the fragility of the eurozone’s economic recovery and will be reluctant to raise rates by more than a quarter point to 2.25% late this year or early in 2006, he says.

The ECB left its target rate at 2% on November 3, and the bank’s president, Jean-Claude Trichet, said the level, which has been unchanged for more than two years, was still appropriate. “The ECB doesn’t need to be in a hurry,” Chandler says. “And any tightening that the market anticipates from the ECB over the next several months is being offset by the market’s discounting an extension of the Fed’s tightening cycle.” 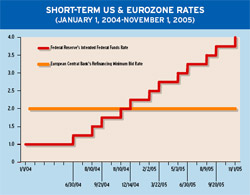 Bernanke is best known in the financial markets for his anti-deflation campaign at the Fed, according to David Gilmore, economist and partner at Essex, Connecticut-based Foreign Exchange Analytics. “Bernanke was worried that near-zero inflation and stagnant economic activity could prompt a Japan-like bout of US deflation,” Gilmore says.

In a November 2002 speech to the National Economists Club in Washington, DC, Bernanke outlined just what the Fed could do if deflation were to occur. A broad-based tax cut accompanied by a program of open-market purchases to alleviate any tendency for interest rates to rise would almost certainly be an effective stimulant to consumption, he said. A money-financed tax cut is essentially equivalent to dropping money from a helicopter, he noted.

“What the deflation story showed is that Bernanke pays lots of attention to the price level and inflation measures generally,” Gilmore says. “And, as an advocate of inflation-targeting, I think it is a safe assumption that he would be as reactive to inflation approaching the top end of the Fed’s threshold as the bottom end.”

In theory, a more rules-based monetary policy with more transparency should result in reduced asset-price volatility, according to Gilmore. “I also think that Bernanke could step into his first FOMC meeting in late March with a need to hike, simply to show markets that he has symmetry in handling upside as well as downside risks to prices,” he says. “And if the wheels stay on the economy and restraint is embraced by Bernanke, then we can look for a 5%-5.5% federal funds rate in relatively short order in 2006,” he adds. 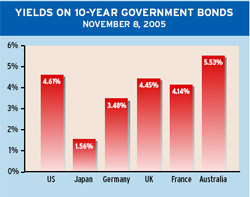 The dollar is unlikely to get much of a boost from the repatriation of as much as $400 billion of earnings by US multinational companies this year at a special reduced tax rate under the Homeland Investment Act, analysts say.

There could be some increased dollar buying ahead of the year-end closing of the window for US corporations that want to repatriate funds under the program. However, the impact of the inflows will be minor in the foreign exchange market, which trades $1.2 trillion daily, says Stephen Kuhl, vice president of foreign exchange solutions and strategy at Travelex, which facilitates international fund transfers for multinational corporations and handles 50% of currency-exchange note volumes at international airports worldwide. “It’s just a drop in the bucket,” he says. The amount of non-dollar holdings that will be repatriated isn’t that great, he adds. “Most of these earnings already are sitting in dollar-denominated accounts offshore and don’t need to be converted into dollars,” he explains.

Meanwhile, a potential further revaluation of the Chinese yuan is one factor that could work against the dollar’s continued rise in the months ahead, analysts say. China’s economy is flexible enough to withstand a more freely traded currency, according to Zhou Xiaochuan, governor of the People’s Bank of China.

China recently announced that it would loosen capital controls on multinational companies by allowing them to lend foreign exchange to their overseas subsidiaries. No timetable was announced for the change, however.