As the dust settles after the German election, it is becoming clear that Europe’s largest economy is undergoing a profound transformation. That change will come at a price, though. 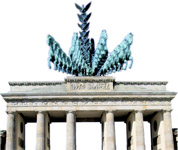 When German conservative leader Angela Merkel finally put together a Grand Coalition of left and right in November, it marked a remarkable overturning of the post-war settlement in that country. Much was made of the fact that Merkel was a woman—Germany’s first female chancellor, indeed. More important still is the fact that as someone who grew up in the former East Germany, she has little natural attachment to an economic model that had long since shown signs of its age.

“I would like to see Germany put back on its feet again,” was Merkel’s rallying cry.

Make no mistake, the German economy is mired in the mud: GDP is expected to rise by a measly 0.8% this year. Next year it will grow by just 1%, according to IFO, the panel of economists that advise the government. That 1% mark is beginning to look like a bad habit: Most estimates put Germany’s trend growth around that level, shameful compared to the 2% level of the rest of the eurozone, let alone the 3% cruising speed of the US economy.

Unemployment hovers just over the 5 million mark, a level last seen just before the Weimar Republic gave up the ghost to the Nazis. In some former East German states almost one in five people are out of work—and that despite some $110 billion of handouts to the East since reunification.

Those handouts, those dole queues, have savaged public finances. Germany’s fiscal deficit stands at over 3.5% of GDP. For four years in a row now, Germany has burst through the 3% mark established by the treaty underpinning the euro single currency.

But these measures have failed to cut into the ranks of the long-term unemployed and have added some $9.8 billion to the social security budget.

For too long, the German workforce has been divided into two camps: those with jobs, good conditions and security and those on the outside looking in. German workers are the most expensive in Europe at $34 an hour (the US equivalent is $23.16). Little wonder that faced with the challenge of China and the opportunity of a low-wage, relatively skilled workforce in the new EU members immediately to the east, German firms have become net exporters of jobs. Rarely a day goes by in Germany without headlines over a planned shuttering of a hometown factory as production facilities are shifted abroad.

But as always in Germany, the truth is a little more complex than the headlines. Frightened by the prospects of unemployment—particularly on the new terms—German workers have begun to react, cutting deals to save jobs. Take Grohe Water Technology, makers of high-quality bathroom fittings. When new owners Texas Pacific Group and the private equity arm of Credit Suisse First Boston earlier this year unveiled a plan to cut 3,200 out of 4,500 jobs by moving production to China, union IG Metall didn’t call its members out. Instead it came up with a counterplan, one that saw one plant close down and 1,000 cut from the payroll. In exchange TPG and CSFB agreed to increase investment in the remaining facilities.

That’s a pattern repeated all across Germany, whether it’s carmaker Daimler’s workers taking a pay freeze or Siemens’ workers staying on up to 40 hours a week for the same paycheck they got for 35. Add that to low inflation in Germany, and unit labor costs have fallen by some 10% against the EU average since 1999.

That’s helped Germany’s blue-chip companies take advantage of the tailwind provided by global GDP gains of over 5% to boost exports by over 50% in five years, especially in the kind of capital goods it makes and China wants. Germany Inc sells over $920 billion of goods and services abroad, making it the world’s largest exporter.

That’s turned the German Main Street into a morgue. Here’s one vignette: Mid-November, international clothes store H&M; introduced a low-cost diffusion range by hot designer Stella McCartney into their stores across Europe. In London’s Oxford Street, would-be fashionistas fought to get at the dresses, and the range was sold out within two hours. Two days later a colleague of this writer reported seeing racks full of the clothes in H&M;’s Hamburg store. (OK, so Stella is Brit, but she is courted across the world, and her dad is Paul, of Beatles fame.)

International companies such as H&M; can weather poor demand in one area of their operations, but it is the Mittelstand companies that are most feeling the pain that comes with swooning domestic demand.

By some counts these small- and medium-size companies provide 80% of jobs in Germany; classical economics tells us that in an advanced economy such as Germany’s they should account for a still higher percentage of new posts. However, it is this sector of the German economy that has found itself most constrained by rules and restrictions, starving entrepreneurs of the time and energy to grow their businesses.

Some of that burden is of their own making: The rules that say who can be a plumber, for instance, owe more to the guild system of the Middle Ages than to any modern, regulated economy. But still others are a by-product of Germany’s ever-present urge to over-engineer its society.

Merkel and her new crew need to get the figures right at a national level to bring the deficit under control. But there is much, much more that can be done at a more micro level to get Germany back to work again.