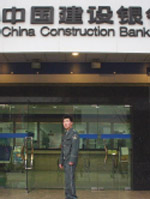 China Construction Bank (CCB) on October 27 became the first of China’s four biggest state-owned banks to launch an initial public offering. Despite mixed reactions from investors, the bank raised US$8 billion on the Hong Kong Stock Exchange, making it the largest IPO globally since 2001 and the largest ever for a Chinese company. In early November the bank increased the size of its offering by an additional 15%, pushing the total value of the share sale to $9.2 billion. In early 2006 the Bank of China (BOC) will likely be the second of China’s four biggest state-owned banks to sell its stock publicly.

Perhaps that is just as well, as the country agreed to limit exports to the US of more than 30 categories of clothing and textiles. The agreement, which will last for three years, came after months of negotiations and only two weeks before US president George W. Bush embarked on a trip to China. Chinese exports of clothing to the US and the EU boomed in the first half of this year after quotas were dropped as part of China’s WTO membership. Both the US and the EU have now negotiated agreements with China to limit the increases in exports over the next two to three years. President Bush is expected to focus on intellectual property rights and currency flexibility during his trip.

China’s Agriculture Ministry unveiled an ambitious plan in the country’s battle against bird flu. China’s state-owned media reported on November 15 that China would vaccinate all of the country’s billions of chickens and other poultry against bird flu. The government, according to the report, will pay for the inoculations, but the procedures for the massive project have yet to be disclosed. Eleven bird flu outbreaks have been reported in China in the past few months.