Determining what style of IT management is right for an organization can be complex. Although centralization offers many benefits, it does not always offer the necessary flexibility. 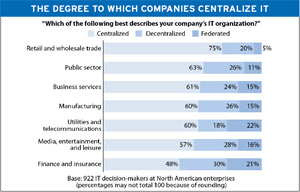 With the speed of technological development, the desire to drive greater efficiency through business processes, and the need to have compliance with new regulatory regimes, IT strategy increasingly plays a critical role in supporting business process management.


The early 2000s saw a trend toward centralized IT management for many corporates. While many mid-size companies continue to move toward centralization, some larger firms have drifted in the opposite direction. Choosing what strategy is best for a particular company depends on the size and type of company and what the goals are within the group.

In a recent survey conducted by research group Forrester, more than 900 North American IT and business decision-makers were asked questions about their approach to IT governance. Of those polled, 60% said their company took a centralized approach to IT management, which was down from 66% the previous year. More surprisingly, the number of respondents who described their approach as decentralized was 26%, up from just 13% the previous year. Those who took a combined, or federated, approach accounted for 15% of respondents, down from 23% last year.

The large growth in those executives that self-describe as having decentralized IT suggests that the drive over the past few years to centralize business processes, including IT, may be waning. Bobby Cameron, a Forrester analyst and author of the report, notes that centralized IT is still the norm, especially among smaller enterprises. “The 2003 peak in IT centralization was rooted in the cost pressures of the recession that followed the dot-com bubble burst—and in the digestion of IT’s $60 billion surplus buying spree during the bubble.”

The survey found that 75% of firms with 1,000 to 4,999 employees described their IT organizations as centralized, which is about 20% to 25% more than mid- and large-size companies. Findings were also split by sector, with retail and wholesale enterprises being much more likely to centralize IT than other sectors.

“For those public companies looking to achieve compliance under Sarbanes-Oxley and other new regulatory changes, then what we are seeing is that there is a tendency to look at standardizing business processes and a tendency to centralize functions where possible,” Cohen notes.

Indeed, there is a growing drive to increase efficiency and transparency of processes through better integration of IT platforms. While this would seem to lend itself to the idea of centralized IT management, this is not necessarily so. With a number of firms either now offering or in the process of building overlay systems that can bring together information from various different platforms, and as data standardization increases, the need to consolidate data interfaces will decline. However, that standardization is as yet a long way off. Although there are standardization initiatives in some industries—such as TWIST and RosettaNet in the financial software arena—the idea of global standards for all business process technology is far from a reality.

Communication between solutions servicing different areas within an organization is improving, however, as companies increasingly focus on building technology bridges between the various parts of the group in order to drive business process efficiency. One prime example is that of sales force automation software, which integrates data from sales, customer service, and finance and ERP systems in order to improve the client experience and increase sales force efficiency by providing them with much richer client data.

When it comes to managing overall IT strategy, the solution may be a combination of centralized IT management for some functions and autonomous IT management for other functions. Indeed, the survey by Forrester found that those with such a federated IT approach tend to have a strategy where both IT and business units are involved in IT decision-making. According to the survey, 66% of respondents from federated IT organizations felt that business and IT worked together to craft the IT department’s strategy. But, noted the survey, only 52% of respondents from centralized IT departments and 46% from decentralized IT described a similar collaborative relationship.