Cover Story: Africa Leads The Way To A New Era

Africa’s economic development will be fueled more by its relationships with other emerging markets than with historical partners in the West. 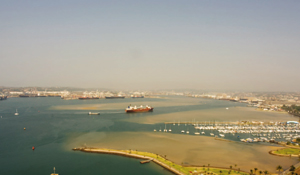 For hundreds of years Africa has represented a land of opportunity for many foreign investors, albeit one that is overshadowed by infrastructural, geographical and political complexities that can make doing business there challenging, to say the least. Yet, says Craig Polkinghorne, global head and director for structured trade and commodity finance at Standard Bank, while Africa’s challenges and problems are well known, they may be less well understood. While investors’ views on the opportunities Africa presents should be tempered with a healthy dose of realism, Polkinghorne states that from a business perspective there is no place for “Afro-pessimists,” as that belies the real and growing opportunities Africa presents.

Although Africa was hit hard by the global recession, with export-driven countries in particular affected by falling commodity prices, economists remain cautiously optimistic about prospects for the region, with a number pointing to the untapped potential that still exists both within and outside of commodity-rich countries such as Nigeria, Equatorial Guinea, Gabon and Angola. The past decade for Africa has largely been a success story, with increased foreign direct investment (FDI) resulting in average annual growth of almost 6% in GDP from 2001 to 2008, according to the World Economic Forum’s Africa Competitiveness Report 2009.

Riding on the coattails of the global commodities boom, in 2008 Africa’s GDP as a whole grew by 5.2%, with sub-Saharan Africa growing at an even faster rate of 5.5%. These high rates of growth were supported by substantial increases in FDI, which in 2008 rose to another record $88 billion, according to the United Nations Conference on Trade and Development’s 2009 World Investment Report. The bulk of 2008’s investment flows (73%) went to sub-Saharan Africa, with large inflows going to commodity-rich countries such as Nigeria, Angola and South Africa.

However, in October the IMF predicted that growth in sub-Saharan Africa would slow to a meager 1% this year before recovering to 4% in 2010. Oil exporters are likely to be hit the hardest, with the IMF pointing out that, relative to the 2004-2008 period, GDP growth in the average oil-exporting country will fall by approximately 6.5 percentage points in 2009, and the decline in their current account and fiscal deficits is expected to be in the double digits. As Africa’s largest oil exporter, Nigeria had a tough time of it, with the bursting of the local stock market bubble. The Central Bank of Nigeria pumped in approximately $4 billion to rescue nine banks that were lumbered with rapidly deteriorating loan books as oil prices and the exchange rate fell. 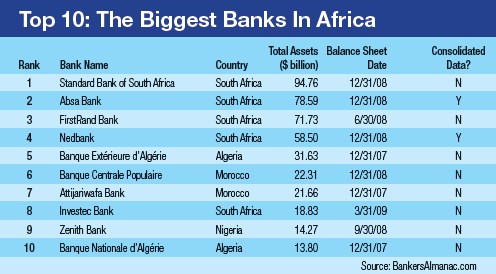 Dykes: The acquisition of arable land in Africa is emotive and has connotations of colonization

Despite concerns that the financial crisis would hit Africa hard in terms of it backsliding in areas of governance, economic policy and poverty, Philippe de Pontet, sub-Saharan African analyst at Eurasia Group, says that has not happened. “Many of these countries have been on a reform path that helped sustain them a little in the last year or so,” he says. Nigeria’s central bank, for example, is eager to reform its banking sector by selling off some of the country’s smaller, troubled banks to both local and foreign players.

Given events of the past 18 months, Dennis Dykes, chief economist at South Africa’s Nedbank, says some of the large US banks may be less inclined to increase their exposure to Africa. However, Ireti Ogbu, head of cash management, Africa, at Citi, says the bank is looking to expand its African footprint beyond the 15 countries it has a presence in already. Diane Reyes, global head of payments at Citi, says it has reinvested more than $1.5 billion in Africa to promote its business, which serves more than 4,000 corporate customers, a number of which are foreign multinationals.

Citi is also looking to service the cash management needs of Africa’s emerging national champions, particularly telecom companies with tremendous revenue growth that are looking to replicate the business practices of the bank’s developed market customers. However, some of these practices are limited by foreign exchange restrictions. Razia Khan, regional head of research for Africa at Standard Chartered Bank, says that African regulators need to address FX market liquidity. If there is to be “a meaningful improvement in liquidity,” she says, the ratio of overall FX transactions to underlying commercial trades has to increase. “This will require more measures by African regulators to facilitate the trend,” Khan says, adding that Africa’s oil economies, which have traditionally had the largest volumes of trade and investment flows, have typically had the most restrictive FX regimes.

Fred Lee, regional head of global markets, Africa, at Standard Chartered, says the financial evolution of Africa will not happen overnight. “Africa is not fully evolved. It is not an easy process, and it will take time,” he says. “All the markets in Africa are very different from one another. When you travel from Kenya down to South Africa into Zimbabwe and back into Nigeria, sometimes it feels like you are going into entirely different worlds. For instance, Kenya, Nigeria and Ghana are more developed markets, while in Botswana and Zimbabwe there is still a lot of work to be done,” he explains.

In many other respects, Africa is leapfrogging other markets, particularly when it comes to the adoption of mobile technologies to facilitate money transfers (see box).

Lee says Standard Chartered is in the process of building a forward FX market, supporting the development of the domestic capital markets as well as introducing interest rate and commodity hedging solutions in Africa. Efforts are also being made to deepen financial sovereign and corporate bond markets in Africa. In the past three to four months, de Pontet says companies in Nigeria and Kenya have issued corporate bonds, which were well received by both local and international investors. Kenya’s main electricity provider KenGen’s 15 billion shillings ($199 million) 10-year bond was almost 70% oversubscribed. With substantial reductions in aid and remittance flows anticipated as a result of the recent financial crisis, de Pontet says there are likely to be sovereign bond issues from a number of African countries in the next year or two.

The BRICs in Africa

European and US companies are historically the largest investors in Africa, but in recent years resource-rich African countries have become increasingly attractive to Asian investors, particularly from China. According to press reports, China will double its direct investment in Nigeria’s oil sector from $3 billion to $6 billion. A Chinese firm is also reported to be investing $7 billion in oil and mining infrastructure in Guinea. “The Chinese are looking at a multibillion-dollar investment in Guinea,” says de Pontet. “And yet, here is a country that is extremely unstable, and after its long-term leader died, there was a military coup. So whereas Western investors may be drawing back, Chinese investors see it as an opportunity to enter the market.”

According to Polkinghorne, Brazil is also forging closer trade links with Portuguese-speaking countries such as Angola and Mozambique. He says that Africa’s future is inextricably linked with that of the BRIC countries, which have steadily increased their trade with Africa. According to Standard Bank data, China, India and Brazil now rank as Africa’s second, sixth and 10th largest trading partners, respectively, and BRIC-Africa trade has increased more than sevenfold from $22.3 billion in 2000 to $166 billion in 2008. The largest recipient of BRIC trade is sub-Saharan Africa, which accounted for 77% in 2008, says Standard Bank.

Polkinghorne says the BRIC’s interest in Africa goes far beyond commodities. “Africa has 15% of the world’s population, which is an untapped market for BRIC countries in terms of their products,” he explains. Food security is also an issue for a lot of BRIC countries, and Polkinghorne says Africa has proportionally far more arable land relative to its population than the BRIC countries. “Africa is underexploited,” says Dykes of Nedbank. “There is a lot of talk about global warming, which is bad for Africa, but if you look at the amount of arable land, I can still see Africa producing vastly more in the way of food.”

However, challenges remain if Africa is to fully realize its agricultural potential. The acquisition of arable land by foreign companies is an emotive issue, as it has connotations of colonization in some countries, says Dykes. Africa’s poor transport infrastructure also presents challenges for companies looking to exploit Africa’s agricultural potential. Polkinghorne says it is difficult to get fertilizer, which is needed to produce high crop yields, from African ports to the interior. Intra-regional trade between African countries is also hampered. De Pontet says Chinese investment in infrastructure is helping to link city regions with regional areas so they can facilitate trade. In Angola, he says, China is rebuilding the infrastructure from the ground up. However, he adds that more project financing is needed to help boost infrastructure spending.

While the obstacles and challenges may appear insurmountable at times, observers remain optimistic about Africa’s future. Mineral exploration opportunities in countries such as Zambia and the Democratic Republic of the Congo are far from fully exploited, and in recent months there have also been commercial oil finds in Uganda and Sierra Leone. “We are seeing increased exploration in most markets and also on new fronts, which nobody really knew about,” says de Pontet. “There are a lot of opportunities in terms of trade flows, and if the transport and power infrastructure improve, that will be the single biggest driver.”

The Mobile Revolution In Africa

While the electricity and transport infrastructure in Africa lags other developing markets, one area where Africa is ahead is mobile telecom. According to Pyramid Research, between 2005 and 2008 Africa and the Middle East comprised the fastest-growing handset market, with sales of new handsets growing at a compound annual rate of 28%, compared with 16% globally.

According to Dennis Dykes, chief economist at Nedbank, the reason why the mobile sector is so successful in Africa is that governments are largely happy to leave it unregulated. The benefits for mobile phone users are numerous, says Dykes—including farmers using mobiles to find out the price of produce in other markets, meaning they do not have to travel long distances. Mobile phones are expanding even in conflict-riven countries in Africa.

Ireti Ogbu, head of cash management, Africa, at Citi, says there are significantly more people in Africa with mobile phones (approximately 400 million) than with bank accounts (approximately 50 million). The mobile technology market represents a significant opportunity for banks like Citi to partner with mobile network operators to reach the “unbanked” population. “The banking revolution in Africa is very exciting,” says Diane Reyes, global head of payments, Citi. “These countries are leapfrogging traditional payment types with new forms of payment.” Citi currently has a partnership with mobile commerce operator Zain in Tanzania and other mobile operators in the region. In Kenya, Safari.com in conjunction with Vodafone launched the mobile money transfer system M-PESA, which has more than 7 million customers.

In Somalia money transfer provider Dahabshiil has rolled out the country’s first debit card service, called eCash, which uses the Internet to transfer money. Abdirashid Duale, CEO of Dahabshiil, says eCash introduces a cashless system for the first time, and it hopes to create a culture where people carry cards instead of cash. “There are a lot of positive signs in this part of the world in terms of technology. Technological change will have a positive impact on the region,” he says.