Much of Latin America is reaping the benefits of a rapid growth in China’s involvement in the region. Booming trade levels are changing some key global market dynamics. 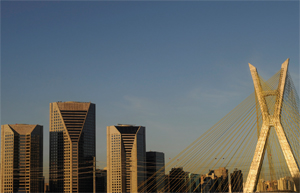 As the skies begin to clear after the global financial crisis, Latin America may become a bellwether for a change that will affect the entire global economy. Whereas in the past, whenever Latin America had a crisis, it looked north to the United States for relief, this time it is China that stepped in to fill the void. And in return for helping Latin America bounce back from the recent downturn, China secured access to much-needed raw materials to fuel its record growth.

The numbers tell a startling story. Trade between China and Latin America soared from just $10 billion in 2000 to $150 billion last year. Chinese exports to Latin America, mainly manufactured goods, rose from $28 billion in 2004 to $71 billion in 2008. Trade volumes have taken even Beijing by surprise. During his first visit to Latin America in 2004, Chinese president Hu Jintao predicted bilateral trade would hit $100 billion within a decade. Yet the threshold was surpassed just three years later. Bilateral trade increased 40% year-on-year between 2007 and 2008 alone, just as the global crisis was hitting the region. The situation has been fueled mainly by China’s insatiable appetite for Latin American commodities, ranging from copper, steel and iron to soy products and foodstuffs.

“While China’s current bilateral trade with Latin America represents 25% of the US total, China’s trade is growing much faster, with a 38% compound annual growth rate since 2004 versus 12% for the US,” says Joseph Floyd, director of investments at SmithStreetSolutions, a leading consulting and market research firm in China. Chile signed a free-trade agreement with China in 2005, becoming the first non-Asian nation to do so. Peru and Costa Rica followed suit with trade pacts of their own.

Floyd predicts bilateral trade will make Beijing an increasingly important source of capital for the region. “This will result in increased integration between regional banks and Chinese banks through both M&A; and partnerships,” he says. “China will leverage its capital and trade imbalances to shift the region’s banks away from reliance on the US dollar.”

China has already become an important financing source for several governments, presenting strong competition to the Inter-American Development Bank (IDB) and other multilateral lenders. Not content with that investment alone, though, China this year became a member of the IDB, making $350 million in contribution grants to the institution.

While IDB loans last year totaled $11.2 billion, just one Chinese loan to Petrobras, Brazil’s state-owned oil company, amounted to $10 billion, with repayment terms including shipments of 200,000 barrels per day of Brazilian oil to China over the next nine years. Petrobras will use the funds to help finance an ambitious investment program.

Ecuador borrowed nearly $3 billion from China to build a hydroelectric dam and finance expansion of its own state-owned oil company. Argentina and China this year agreed on a two-year $10 billion currency swap. In September China Development Bank participated in a two-year $100 million syndicated loan for Bladex, a Panama-based foreign trade bank.

Floyd: China’s bilateral trade with Latin America is growing faster than US trade with the region

SmithStreetSolutions’ Floyd says Brazil, Peru and Chile are best positioned to welcome Chinese investments. Their stable governments, Peru and Chile’s free-trade pacts with China, relatively low levels of corruption and large local Chinese populations in Brazil and Peru all count heavily in their favor. On the other hand, Mexico and Central America present less favorable conditions. “Mexico’s proximity to the US and its focus on manufacturing—a competitor to Chinese manufacturing—have limited Mexico-China exports to only 3% of Mexico’s total exports,” concludes Floyd.

Floyd believes China’s investment and M&A; activity, thus far focused on commodities, will expand to technology, agriculture, telecom, financial services and infrastructure. China’s first-ever policy paper on Latin America and the Caribbean, published in late 2008, mentioned its interest in investing in energy, mining, forestry, fishing and agriculture in Latin America, while also identifying infrastructure projects as being of interest.

“Though China and Latin America and the Caribbean are far from each other, the two peoples enjoy a time-honored friendship,” says the policy paper, which follows similar documents focused on Europe in 2003 and Africa in 2006. “The two sides are at a similar stage of development and face the common task of achieving development.”

Floyd believes the targeted sectors were carefully chosen. “Investments in infrastructure and agriculture are necessary to secure access to natural resources, commodities and food; investments in technology, telecom and financial services will allow Chinese firms to move up the value chain,” he explains.

“Chinese companies’ investments in the banking industry and their trade financing with the region are both set to grow,” says José Luis Vittor, a partner in the Houston office of the law firm of McDermott Will & Emery. “At the outset, several Chinese companies have ambitious investment plans in new ventures that will incentivize their banks to follow them.”

Arjun Chatrath, professor of finance at the University of Portland in Oregon, agrees. “It appears that a serious expansion of Chinese banks into Latin America is just a matter of time,” he says. Bank of China has already opened a branch in São Paulo and plans to offer retail banking services in Brazil.

Meanwhile, Chinese trade and financing are contributing to Latin America’s economic resurgence. Standard & Poor’s predicts the region’s real GDP will shrink by 2.3% this year but will grow by 3% in 2010. The Chinese dragon, it seems, at least for some Latin American countries, is not that scary after all.

Fernández: US and Europe should study closely China’s increased influence in Latin America

“Unquestionably, the solidity and large amounts of hard currency held by most Chinese state banks facilitates China’s incursion into Latin America, whether through granting loans to needy countries, financing governments or offering to sell equipment with long-term financing included,” says Ernesto Fernández Taboada, executive director of the Argentine-Chinese Chamber of Production, Industry and Commerce in Buenos Aires. Fernández feels China’s hunger for commodities and the weakening of US and European business interests by the region’s more radical leftist regimes also contribute to China’s growing role.

“If these factors—which are not the only ones—are evaluated within the current context of international crisis, from which China emerges as one of the countries least affected and with the greatest growth potential, one can deduce that China’s increased presence and influence is a logical consequence that both the US and Europe should study carefully if they want to recover some lost ground,” Fernández adds.

Washington has been watching China’s Latin American drive closely. In 2006 Thomas Shannon, then US assistant secretary of state for Western hemisphere affairs, traveled to Beijing to discuss the country’s growing involvement in Latin America. Since then, China has become Brazil’s largest trading partner and rewarded Costa Rica for shifting its diplomatic relations away from Taiwan by purchasing $300 million worth of Costa Rican bonds and by building a $74 million soccer stadium as a gift.

“Trade and investment with China at this scale always take place through some [Chinese] government-linked corporation, so political considerations are always foremost,” says Usha Haley, Asia programs fellow at Harvard University’s Kennedy School of Government and author of The Chinese Tao of Business: The Logic of Successful Business Strategy. “[US] secretary of state Hillary Clinton has stated quite clearly that China and Iran are making ‘disturbing’ gains in the region,” Haley adds.

Not everyone in the US views China’s drive negatively. Increased Chinese-Latin American trade is creating a boom for Miami’s port, as much of the trade flows through Florida. China jumped from being the Port of Miami’s 33rd-largest trading partner in 2001 to becoming the largest in 2008. “To the extent American companies and capital interests are growing and positioned around the world, America itself can benefit from trade almost anywhere, including that conducted directly between the shores of China and those of Latin America,” says Bill Johnson, director of the Port of Miami. “China’s presence in Latin America will continue to grow and could be seen by the United States as an opportunity instead of a threat.”

Some Latin American countries, nevertheless, are themselves concerned over China’s growing presence. Mexico, for example, views cheap Chinese labor as a major threat to its apparel sector that once had preferential access to US consumers. While Brazil has benefited most from Chinese investments so far, some Brazilian manufacturers complain of less expensive Chinese imports that are not only hurting local production but also causing exports of some goods to Argentina to dwindle.

Following a boom in FDI flows to Latin America in recent years, the region has seen a drop in investment activity this year. However, analysts say the slowdown is more due to global economic conditions than to regional issues keeping investors away.

According to the United Nations Conference on Trade and Development (Unctad), FDI to Latin America will have dropped by some 45% year-on-year in 2009, though citing more conservative corporate investment programs as the reason for the decline.

The downturn follows hefty FDI flows. FDI to the region grew 52% year-on-year in 2007, followed by a 13.4% expansion last year to a record $144 billion. Brazil, Chile and Colombia accounted for 80% of the 2008 total, with other big winners including Argentina, the Dominican Republic and Trinidad & Tobago.

FDI to Brazil last year was up by 29% year-on-year to $45 billion, prompted by the opening of several economic sectors, including oil and agribusiness, to foreign players. However, flows were not as stellar this year. July’s monthly total dropped 60.3% year-on-year to $1.29 billion. This took first-half 2009 accumulated FDI to $13.97 billion, 30% lower than in first-half 2008. In Colombia FDI flows to the mining industry more than doubled in first-half 2009 to $1.72 billion, compared with $817 million a year earlier. However, total FDI fell 10% to $4.9 billion.

Mexico, Peru and El Salvador began posting FDI declines last year. Mexico received $21 billion in FDI in 2008, for a 16% year-on-year decline, as the nation’s economy continued to reel from the global downturn and its close links to US economic performance.

Unctad predicts global FDI, expected to fall below $1.2 trillion this year, will recover in 2010 to some $1.4 trillion and to $1.8 trillion in 2011. The figure would be closer to 2008’s $1.7 trillion and 2007’s $2 trillion. With Latin American governments maintaining political and economic stability, and with cash-heavy China seeking opportunities, Latin America is poised to welcome investors.