The outlook for the Middle East’s economy has brightened substantially in recent months, but the reluctance of banks to lend remains worrisome. Bond issues are picking up some of the slack. 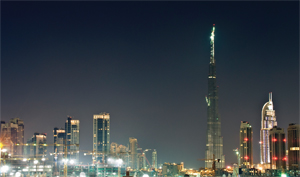 Business confidence in the oil-exporting countries of the Gulf Cooperation Council (GCC) is rebounding along with oil prices, while the Mashreq countries, which include Egypt, Jordan, Lebanon and Syria, are benefiting from improved security and growth in financial services and tourism. Overall economic growth in the Middle East will more than double in 2010 to 4.2%, according to the International Monetary Fund. Economists say growth in the region could be even stronger than that if oil prices rise further.

“It has been a tough year for the Saudi economy,” the biggest in the region, says Brad Bourland, chief economist at Riyadh-based Jadwa Investment. First came the global recession and then the high-profile family feud between the wealthy Algosaibis and Al-Saneas. Sustainable recovery appears to have taken hold in the kingdom in the current quarter, Bourland says, although many businesses still face problems accessing finance.

“Given the caution within commercial banks, only modest growth in lending is expected over the near term,” Bourland says. “Owing to worries about family businesses and their own exposures, banks have become more cautious in extending credit to the whole of the private sector.”

While lower official interest rates and other policy measures have brought down interbank rates, the accommodative monetary policy has yet to stimulate a revival in commercial bank lending, Bourland says. The Saudi Arabian Monetary Agency (SAMA) has done what it can to make the environment conducive to lending, but it is risk aversion rather than a lack of liquidity that appears to be discouraging banks from lending, he says.

Jadwa Investment expects Saudi banks to report lower earnings this year because of greater provisioning for bad loans. Insurance and hotels and tourism were the only sectors where earnings of listed companies grew in the first half of 2009 compared to the same period a year earlier. Overall earnings growth is expected to return to positive territory for the second half of 2009, in part reflecting the low base for comparison with the very poor fourth quarter of 2008, Jadwa says.

With oil accounting for around 90% of Saudi export revenue, the recovery in crude prices—to around $80 a barrel in October 2009 from $32 a barrel at the end of last year—will make it easy for the government to fund its budget deficit by drawing down foreign assets or deposits at domestic banks, according to Jadwa.

Stronger oil prices and an easing of the global financial crisis have improved economic prospects in the GCC for the second half of 2009, but it will still be a year of contraction and retrenchment, says Howard Handy, chief economist at Samba Financial Group. “Liquidity is returning to the GCC in response to robust government measures and recovering oil prices,” he says. “Access to capital markets is also beginning to pick up, with new bond issuance by GCC governments, state-owned companies and banks.”

The strengthening of oil prices means that expansionary policies can now be accommodated much more comfortably and sustained into 2010, Handy says. “Despite the impressive recent growth in non-oil activity in the region, oil prices remain key to the health of GCC economies,” he says. However, the still relatively weak oil-market fundamentals suggest that the Organization of Petroleum Exporting Countries will continue to press for crude-output restraint, and any production increases in 2010 are thus likely to be muted, according to Handy.

The weakness in lending reflects some reluctance on the part of GCC banks, as well as reduced demand for credit as companies rein in their investment programs in the face of a weak economy, Handy says. “Both retail and corporate portfolios remain under strain, reflecting the economic downturn, weakness in corporate governance, especially in unlisted companies, and declining property values,” he says.

The price of crude oil is the single biggest factor in regional business confidence, according to HSBC. The bank’s Gulf Business Confidence Index, which compares current business confidence to a base of 100, set in early 2007, rose to 81.4 in the third quarter—its highest level since October 2008. By almost all measures, businesses in the six GCC countries are more optimistic about their performances for the full-year 2009, with executives and junior managers alike expecting higher sales and profits, HSBC says.

Saudi businesses were the most confident of the group, with an HSBC index reading of 91.5 in the third quarter. While the UAE had the lowest reading, at 72.2, the country also had the biggest improvement for the year to date.

The open economy of the UAE, which relies heavily on trade and tourism, was hit hard by the global recession, and the Dubai property sector is still reeling from a steep drop in prices since last year. Colliers International says that there is still a 25% oversupply in the residential housing market and that there is a glut of new office space coming onto the commercial real estate market that could depress prices further.

Emaar Properties, the Middle East’s largest developer, which just completed the Burj Dubai, the tallest building in the world, is merging with three property companies owned by government-owned Dubai Holding—Dubai Properties, Sama Dubai and Tatweer—to create an entity with combined assets of $53 billion. Tatweer, the developer of a proposed $110 billion theme park, known as Dubailand, has transferred most of the park’s projects to Dubai Properties. A new timeline for the completion of Dubailand will be released next year.

Despite concern about the $80 billion owed by Dubai and the companies it controls, liquidity in the banking system has improved, and recent large bond issues have been successful. In Abu Dhabi, the UAE’s capital, Abu Dhabi Commercial Bank issued a $1 billion bond in October under its $7.5 billion global medium-term note program. The five-year issue of 4.75% fixed-rate bonds was sold at 262 basis points over equivalent US treasuries. Dubai is also testing the waters for a potential global bond issue.

Debt issuance throughout the Middle East rose 43% in the first three quarters of 2009 from the same period a year earlier, to $21.8 billion, according to Thomson Reuters, which has introduced quarterly investment banking league tables for the region. “While there have been encouraging signs in the region’s debt markets, it remains to be seen if there is sufficient confidence in talk of recovery to reignite the Middle East’s equity offerings and loan markets, which are witnessing dramatic declines so far this year,” says Basil Moftah, managing director of Thomson Reuters-Middle East and Africa. In the first nine months of this year, equity issuance in the Middle East was down 86% from the same period a year earlier, and loan values were down more than 82%.

“Thomson Reuters data show that it has been a tough year so far both regionally and internationally for investment banks and financial advisers,” Moftah says.

HSBC, Saudi Hollandi Bank and Qatar National Bank were the top three underwriters of equity capital market issues in the Middle East in the first three quarters of 2009. HSBC also led the debt market rankings on the basis of fees earned, while Calyon topped the syndicated loan fee rankings. Overall investment banker and adviser fees totaled $431 million, down 57% from the same period of 2008.

Morgan Stanley led in the mergers and acquisitions fee rankings, while Rothschild topped the M&A; rankings based on deal values, with $15.4 billion, followed closely by Deutsche Bank, which advised on deals valued at $15.3 billion. Goldman Sachs was third with $15.1 billion in announced deals. Bank of America Merrill Lynch led in completed deals with $7.5 billion, followed by Morgan Stanley and Goldman Sachs.

The financial crisis has revealed some vulnerability in the region’s financial sector, according to the IMF. In a report released in October, it cited weak risk management systems and too much leverage. “The banking systems of several oil-exporting countries could come under severe stress if global financial conditions tighten again,” the IMF warned. It urged GCC countries to closely monitor the health of their financial systems and to subject their banks to rigorous stress tests.

In Kuwait, the central bank asked commercial banks in July to boost their loan-loss provisions and to book them on a quarterly basis instead of once a year. The government had to rescue Gulf Bank last year after it suffered a run when losses mounted from clients defaulting on debt taken out to speculate in currency derivatives. Under a financial stabilization law approved in March, the government is guaranteeing 50% of new bank loans to local firms for two years, as well as banks’ investments in real estate for 15 years.

Central banks across the region have cut interest rates and introduced dollar swap facilities to relieve the liquidity crisis. Sovereign wealth funds also have increased investments in local markets to restore stability. Rising oil prices will do much to stimulate growth, not only in the GCC, but also will have spillover effects in the Mashreq region.

Lebanon had a 32% increase in foreign direct investment last year, mainly in real estate, while Syria enjoyed a 70% surge in FDI, due to the country’s increasing economic openness and improving international relations, according to the United Nations Conference on Trade and Development.

Lebanon’s banks hold a large proportion of their capital in reserve and shun risky derivatives. The onset of the financial crisis sparked worries that troubles in the Gulf would infect the Lebanese economy, but the country’s banks took measures to support the local economy, says Eric Mottu, resident representative for the IMF in Lebanon. “The response of Lebanon’s banks was both swift and appropriate and should be taken as a model by other countries,” he says. The return of relative political stability in the wake of the Doha agreement of May 2008 also played a major role in boosting confidence in Lebanon’s economy.

Meanwhile, the number of Islamic financial institutions continues to grow. Their emphasis on prudence has helped push assets of the shariah-compliant finance industry to the $1 trillion milestone. The increasing number of Islamic financial institutions in the region have rules against interest and excessive risk that shielded them against toxic assets, according to Omar Bin Sulaiman, governor of the Dubai International Financial Center and vice chairman of the UAE central bank. “Another important outcome of the crisis came in response to the near total freezing of access to international capital during the height of the crisis,” he says. “This put in stark relief an issue that had been bubbling in certain banking and policy circles for years—the urgent need to develop the region’s debt markets, both conventional and Islamic.”