Foreign exchange market analysts expect the dollar to turn higher sometime in 2010, but whether the turning point comes early or late in the year could very well depend on how long the Federal Reserve waits to raise rates.

The dollar’s slide has legs, says David Gilmore, partner and economist at Foreign Exchange Analytics, based in Essex, Connecticut. “Nothing is really going to change the trend in the dollar until much later in 2010,” he says.

If anything, the news that the US gross domestic product grew at a 3.5% annual rate in the third quarter warrants circumspection, not celebration, Gilmore says. The first increase in GDP following four quarters of contraction was slightly stronger than expected and was heralded as a milestone signifying that the Great Recession probably ended sometime this summer.

“I know the difference between gross domestic product and government domestic product,” Gilmore says. It is primarily public policy that is supporting GDP, and the only private sector lift came from housing investment, which came off an extremely low base and was not a sign that housing is leading the recovery, he says.

“What is less clear is what happens to GDP when government support fades,”Gilmore says. The Cash for Clunkers program to spur auto sales distorted economic data and demonstrated that, outside of a large government giveaway, there is not much demand from consumers. “One has to assume that the $8,000 tax credit for housing is playing a similar role in home sales,” he adds.

There is little evidence of private sector sources of growth, and the situation is unlikely to change soon, with weak consumer confidence, a high unemployment rate, lower household wealth, declining real income and tight credit, according to Gilmore.

Michael Woolfolk, senior currency strategist at BNY Mellon, says that while private demand may be stabilizing, it is not sufficient to warrant the removal of fiscal and monetary stimulus before year-end. Other Group of Seven central banks are likely to hold off raising rates until the Federal Reserve moves first, in order to prevent further appreciation of their currencies against the dollar, Woolfolk says.

“Despite the handwringing over dollar weakness and talk of SDRs [special drawing rights] replacing the greenback as the primary reserve currency, the euro is at the same level against the dollar as it was 30 years ago,” Woolfolk says. Nevertheless, the dollar is weaker than it was at the beginning of the year.

“Investors in the carry trades are fickle by necessity,” Woolfolk says. “A modest rebound in the funding currency’s value can all but wipe out any nominal gains from rate differentials.”

The Fed is aware that unwinding of carry trades can be quite violent and destabilizing affairs, Woolfolk says, and in order to fulfill its stated objective of monitoring foreign exchange rates and discouraging disorderly market conditions, it cannot allow the carry trade to become too large. “For this reason, the dollar is expected to rebound in the first half of 2010 as US rates move higher,” he says. “The move will be further fueled by the unwinding of the dollar carry trade, the extent of which will largely depend on how long the Fed delays in raising rates.”

Steven Pearson, foreign exchange strategist at Bank of America Merrill Lynch, who is based in London, says, “The path of least resistance remains, in our view, for the dollar downtrend to extend a little further.”

The euro continues to benefit from a strong tailwind as a result of central bank reserve managers diversifying away from the dollar, Pearson says. Strong fund inflows into emerging market equity and debt markets are continuing to drive a rapid pace of reserve accumulation, he says.

Nonetheless, the dollar’s long-term declining trend appears to be relatively mature and is starting to fragment as some individual currencies, such as the British pound and the Canadian dollar, are undermined by domestic factors, Pearson says.

“Traders are flicking the on/off switch for risk appetite,” says Mark Frey, regional director for corporate Canada at Custom House, a foreign exchange and global payments company based in Victoria, British Columbia, Canada. Traders’ decisions continue to be made in the starkest of terms, Frey says. Either they practice outright risk avoidance, where the dollar does well, or outright risk acceptance, where the major currencies of countries that are most leveraged for growth perform well.

The risk selloff in equity markets and rise in the dollar in late October was due to positioning of market participants and concerns about the future withdrawal of liquidity from the markets, according to analysts at Barclays Capital. As long as global markets remain volatile, local fundamentals are likely to play a secondary role, they say. Suddenly, the market became fixated on liquidity withdrawal and monetary policy tightening a lot sooner than expected.

“As global equity markets sold off [in late October], emerging market currency markets also did, somewhat more violently, but otherwise pretty much as would have been expected,” says Michael Gavin, New Yorkbased emerging markets strategist at Barclays Capital. “We remain generally bullish on the global market context, while recognizing that valuations and positions are no longer as supportive as they were six weeks, never mind six months, ago,” he says.

The occasional outbreak of nerves is therefore likely to become more frequent than it had been during the earlier stages of the emerging market currency rally, Gavin says. “We recommend buying on the dips,” he says.

A case can be made for using the foreign exchange market as a cross-asset hedge for equity portfolios, given the correlation of the dollar with the stock market and the relative attractiveness of hedging through currency, rather than equity options, Barclays Capital says. 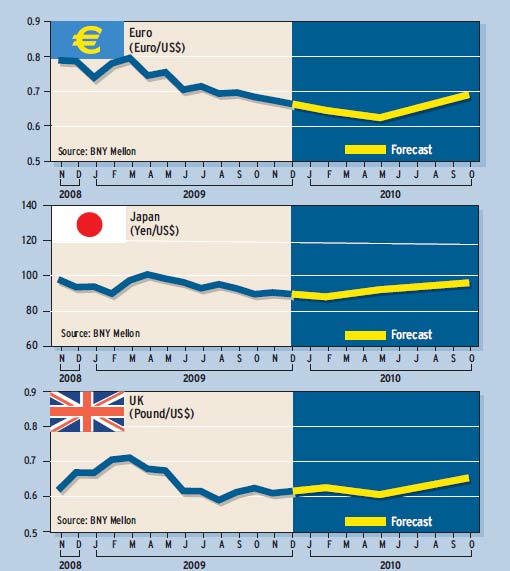 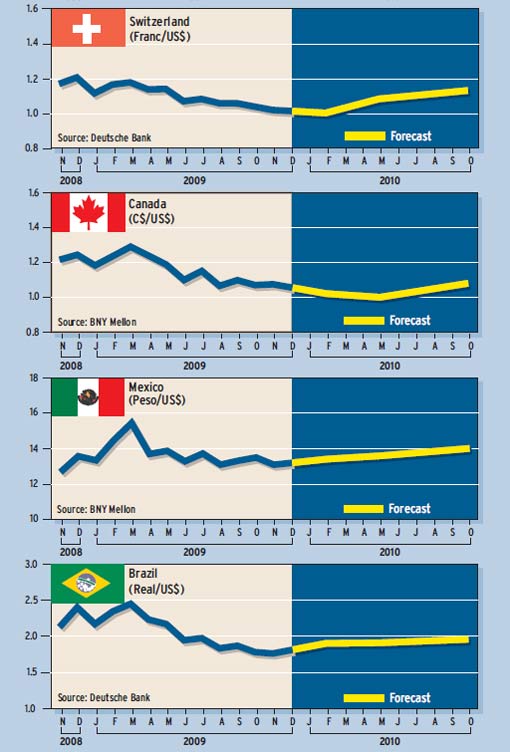 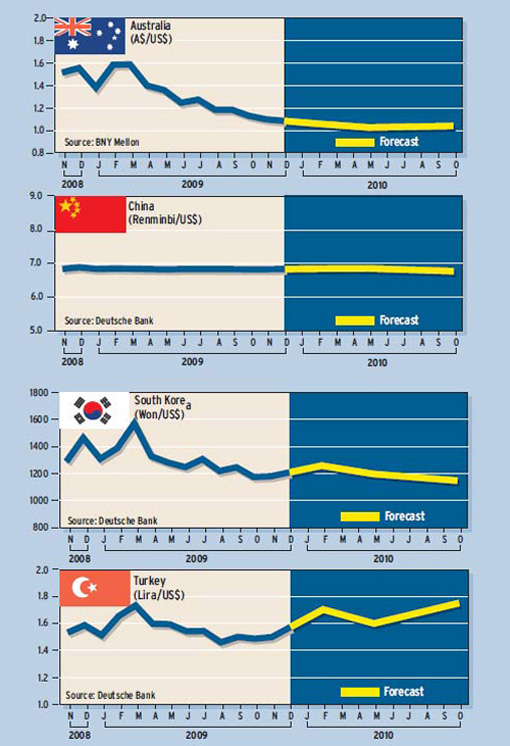