Warren Buffett’s $34 billion investment in Burlington Northern Santa Fe, the second-biggest railroad in the US, was a big bet on the future of the US economy, but major deals in emerging markets and Asia recently hint at a potential new source of mergers and acquisitions in the future.

The biggest M&A; transaction in the Americas in October involved a bidding war for Brazil-based mobile phone company GVT. Madrid-based Telefonica, the second-largest phone company in Europe, raised its offer for GVT by 5.2% to about $4 billion. Telefonica’s Brazilian unit, Telecomunicacoes de São Paulo, increased its unsolicited offer for GVT in an attempt to head off a potential new offer from France-based Vivendi, which is seeking to expand in fast-growing emerging markets. Vivendi made a friendly $3 billion bid for GVT in September.

Meanwhile, the biggest M&A; deal in Europe in October was a $5.6 billion agreement by Russia-based Vimpelkom to merge with Ukraine-based Kyivstar to form a new mobile phone services operator that will be active in a range of emerging markets. In that deal, Norway-based Telenor and Altimo, the telecommunications arm of Russia’s Alfa Group, agreed to combine their holdings to create VimpelCom, a new company that will provide mobile phone services in Russia, Ukraine and other members of the Commonwealth of Independent States. The new company also will operate in Georgia, Vietnam, Cambodia and Laos and has plans to expand into Africa.

While takeover deals in the US and Europe routinely are ranked as the largest in the world in any given month, the biggest transaction in October was in Asia, according to Thomson Reuters. Nippon Oil and Nippon Mining signed an $11.4 billion deal to merge in April 2010 in an attempt to cut costs. Nippon Oil, Japan’s largest refiner, is suffering from overcapacity.

“Consumption has dropped much faster than we expected, and this is the problem we need to address first,” says Mitsunori Takahagi, president of Nippon Mining, who will become president of the new holding company, JX Holdings.

Nippon Mining, Japan’s biggest copper miner, is also an oil refiner. The merged companies plan to cut refining capacity by 200,000 barrels a day by 2015 and to redirect their efforts toward fuel cells and solar energy.

While emerging market and Asian M&A; deals could take a bigger share of the deal pie in the future, it was Buffett’s bid for the American rail icon that raised the biggest hopes for a pickup in global merger activity. Not only is Burlington Northern Santa Fe the biggest transporter of coal for electricity generation in the US, but it also carries a wide range of imported retail and consumer goods from the big ports in California into the country’s heartland. Therefore, it stands to benefit from a rebound in the US economy.

Buffett’s Berkshire Hathaway already owns about 23% of Burlington Northern and wants to buy the remaining 77% of its outstanding common shares. It offered a premium of 31.5% to the market price. Goldman Sachs and Evercore Partners are advising the railroad on the proposed transaction. Buffett’s biggest deal ever also would involve the assumption of $10 billion of the railroad’s debt, bringing the total value of the deal to $44 billion.

Another sign of a revival in dealmaking was the announcement in early November of the biggest leveraged buyout deal of the year. Private equity firm TPG and the Canadian Pension Plan agreed to buy IMS Health, a Norwalk, Connecticut-based provider of market intelligence to the global healthcare industry. The transaction has a total value of $5.2 billion, including the assumption of debt. LBOs declined sharply during the credit crisis, when it was difficult to get financing, but they are making a comeback. Goldman Sachs is providing debt financing for the IMS Health buyout. 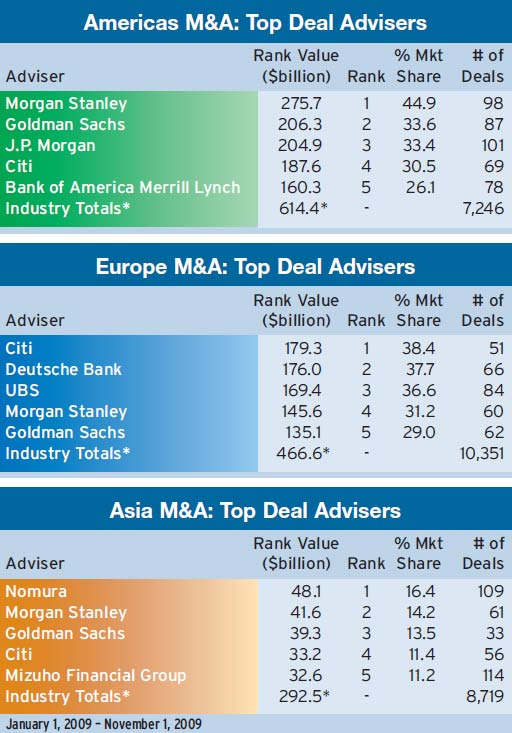