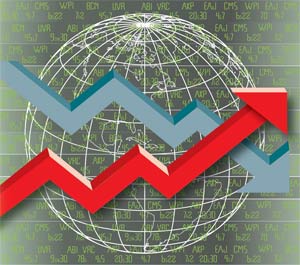 Like initial public offerings, the amount of equity capital raised using depositary receipts dried up during the global financial crisis, but there has been a flood of new DR issues in recent months, and companies around the world are expected to make active use of the DR capital market in 2010, market participants say.

Banco Santander (Brasil) holds the record for the world’s largest IPO for the year to date, with its $8 billion offering in October, which was also the largest ever by a company based in Latin America and the largest offering by any foreign company on a US exchange so far this year. J.P. Morgan is the depositary bank for the Brazilian bank’s American depositary receipt (ADR) program.

The Banco Santander (Brasil) IPO, which listed simultaneously in Brazil and the US, was a historic event because of its size, says Claudine Gallagher, global head of depositary receipts at J.P. Morgan. The IPO was the largest in Brazil’s history, surpassing the $4.3 billion IPO of VisaNet in June.

J.P. Morgan is also the depositary bank for the ADR program of Shanda Games, one of the largest providers of online games in China, with nearly 10 million active accounts. Shanda Games raised $1 billion in its US-only issue on September 23, which was the largest IPO of the year in the US at the time. It was the largestever sole US-listed IPO issued by a China-based company. The shares trade on Nasdaq. “The $1 billion was more than the company expected to raise,” Gallagher says. “If the Banco Santander Brasil and Shanda Games IPOs are good precursors of what lies ahead in 2010, it could be a good year. I am cautiously optimistic,” she says.

Will Russia Come Back?

More DR issues are likely from the big emerging markets, including Brazil, India and China, in such sectors as online gaming, healthcare and hospitals, and online education, Gallagher says. “Russia has been absent from the market for some time, but it may be positioning itself to come back,” she says.

Aluminum producer Rusal is planning an IPO in Hong Kong that could raise $3 billion in the sale of a 10% stake in the company, but the stock issue depends on progress being made in the company’s foreign debt restructuring.

Gallagher says J.P. Morgan has received queries from companies in the Middle East and North Africa that may be interested in making DR issues in 2010. The bank also has established a presence in Nigeria to handle possible future issues.

Brazil in October introduced a 2% transaction tax to discourage foreign buying of its currency in an attempt to prevent the real from rising. DR banks are assessing the new tax, but it could make DRs an extremely attractive alternative for Brazilian issuers.

Michael Cole-Fontayn, chief executive of BNY Mellon’s depositary receipt division, was in Brazil at the time the tax was announced. “The tax is a minor frictional cost for investors who are attracted to the undoubted long-term potential of Brazil,” he says. The tax likely will be temporary, he adds, but it does make depositary receipts relatively more attractive. DR issuers are more favored, particularly large existing issuers, and they may accelerate issuing plans that had been delayed due to global economic and market conditions, he says.

“Overall, I am looking forward to a much better year for DR capital raising in 2010 than 2009 has proved to be,” Cole-Fontayn says. “My optimism is cautious, however, and we need to see how the markets anticipate and deal with the withdrawal of liquidity as government stimulus programs are wound down.”

There is certainly plenty of corporate demand for capital, Cole-Fontayn says, and investors should react positively to well-priced transactions from companies with simple, sustainable business models, good management and access to sources of liquidity. “Equity issues from companies with a competitive advantage and strong internal cash-flow generation should do well,” he says.

Picking Up the Pace

“Anecdotally, the pipeline is beginning to become more active,” Cole-Fontayn says. “We are picking up conversations with potential issuers from 18 months to two years ago.” Some companies will wait until after the year-end results are out of the way, with DR issuance likely to be active early in the second quarter of 2010, he says.

There were 37 new DR offerings and secondary issues in the year to date through early November, according to BNY Mellon, and 26 of these issues were from companies based in Asia. In 2010 China and India, as well as Brazil, will continue to be active, and Russia likely will come back to the global equity markets, Cole-Fontayn says. “There are some great Russian companies that people want to invest in,” he says.

The long-term objective of the Russian government is to bring in more capital to key infrastructure, such as transport and power generation, Cole-Fontayn says. Meanwhile, the Russian private sector will be recapitalizing to take advantage of strategic opportunities, he adds.

Russian grocer Magnit raised $527 million in an oversubscribed secondary share offering in late October. The issue was only the second of the year from Russia. Steelmaker Evraz raised $315 million by selling shares and $650 million through a convertible bond issue in July.

In Latin America, Mexico-based companies could be active issuers next year, Cole-Fontayn says. China, Taiwan and South Korea will also be active, he adds. “The financial sector in general will be recapitalizing throughout the world,” he says.

Nancy Lissemore, managing director of depositary receipt services at Citi, says that outside of the BRIC countries (Brazil, Russia, India and China), which will continue to produce issuance activity in 2010, there could be some DR issues from Taiwan and the Middle East (depending on a significant rebound in the real estate market), as well as issues from companies based in Colombia and Peru.

“Assuming that market momentum continues, there are companies on the sidelines that will come in next year,” Lissemore says. “DR capital raising is affected by global macroeconomic events. We anticipate an improving pipeline of capital raisings materializing as the market sentiments improve across the board,” she says.

Empirical analysis shows that looking at key events over the past 20 years, including the Mexican peso devaluation, the Russian default in 1998 and the global market downturn of 2000, capital raisings rebounded in the period immediately following each crisis, according to Citi’s DR 2009 mid-year report. On average, growth in DR capital raised in the year following each crisis has been about 70%, the report says.

The total equity capital raised using DRs in the year to date, as of the end of October, was $6.6 billion, and the total for 2010 will probably surpass this year’s total, Lissemore says. India is the leading country in the total of IPO and follow-on equity offerings using DRs so far this year, she says.

Citi is the depositary bank for the New York Stock Exchange-listed ADR program of Sterlite Industries India, one of the country’s largest miners. The company raised $2 billion via ADRs in June 2007 and had a follow-on offering of $1.5 billion in the United States in July 2009. Sterlite, which is listed on the Bombay Stock Exchange, is a miner of non-ferrous metals, such as copper and zinc. The company is part of Vedanta Resources, a conglomerate controlled by billionaire Anil Agarwal. Sterlite Energy, also part of Vedanta, filed a regulatory application in Mumbai in October for a $1.1 billion IPO.

Tata Steel, another Citi DR client, raised $500 million in July in the largest-ever GDR offering to be listed on the London Stock Exchange, which has 52 listed companies based in India.

Companies based in Asia, the Middle East and Latin America will likely be active in tapping the DR equity capital market next year, Lissemore says. In September Mexico-based Cemex, a global supplier of building materials, raised $1.3 billion via ADRs and participation certificates.

Akbar Poonawala, managing director of global equity services at Deutsche Bank, says the outlook for DR capital raising in 2010 will depend to a large extent on the risk appetite of investors. “We are likely to see a broadening out of issuance to more markets in a second concentric circle of companies around those that have previously accessed the market, with Russia rejoining the parade,” he says. “Asia will likely remain the key element, however, with more issues from India, China and Taiwan.”

Russia has been sitting it out in 2009, Poonawala says, but it is just a matter of time before Russian companies become active issuers again.

The Middle East and Africa region also could produce some DR capital raisings next year, with potential issuers drawn from Nigeria, northern Africa, Kuwait and the United Arab Emirates, Poonawala says. “Issuers will be testing the waters in the first quarter of 2010, so long as the markets hold up,” he says.

In the first nine months of 2009, some $10 billion of capital was raised in DR form, including follow-on issues, as against $11 billion in all of 2008, Poonawala says. “The number of new programs this year is on track to be almost the same as last year,” he says.

It remains to be seen, however, when the DR capital market will return to the golden years of 2006 and 2007, when the total raised reached $42 billion and $50 billion, respectively, Poonawala says. 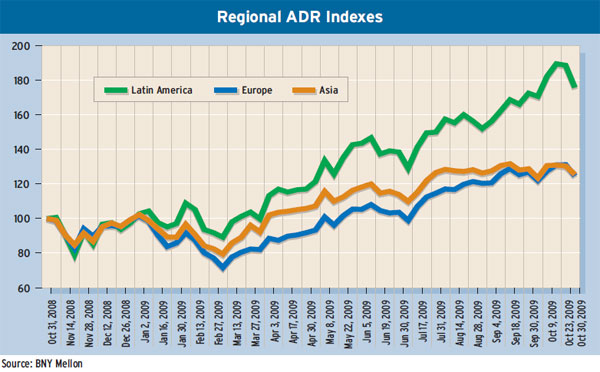