Corporate bond issuance worldwide passed the $2.5 trillion milestone for the year to date in October, and credit quality improved, as the record rally in the credit markets rolled along. Standard & Poor’s contributed to the upbeat mood by cutting in half its projected corporate default rate.

“The default rate, currently at 10.8%, will continue to inch up in the fourth quarter before we see a decline in 2010,” says Diane Vazza, head of S&P;’s global fixed-income research. S&P; forecast in June that the speculativegrade default rate would rise to 13.9% in the following 12 months. It now expects that by the end of the third quarter of 2010 the baseline default rate will be 6.9%.

“This does not mean that corporate default risks are permanently lower,” Vazza says. “Instead, we believe these improvements are largely being driven by increased forbearance by lenders in a monetary environment propped up by policy-induced liquidity.”

The Federal Open Market Committee gave no indication at its November meeting that it was considering taking away the punch bowl anytime soon. The corporate bond market is humming and can be easily accessed by investment-grade borrowers, while lesser-rated credits are also finding ready buyers for their debt in the privateplacement market if they are willing to pay the price.

Corporations raised $121 billion through high-yield bonds in the US in the first 10 months of 2009, according to Montpelier, Vermontbased KDP Investment Advisors. The new-issuance total for October slipped to $14.9 billion from $21.6 billion in September and was split between 36 private placements and four public issues. 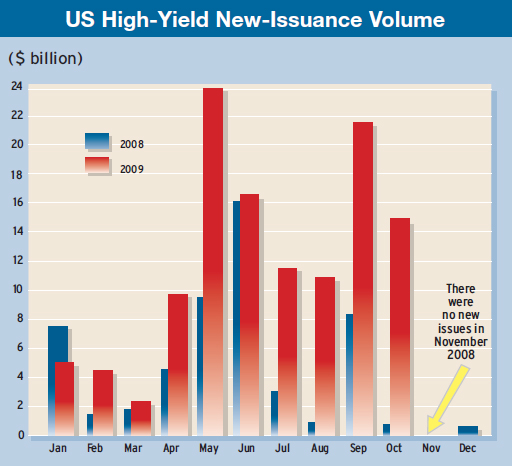 Alon Refining Krotz Springs, which got caught in a squeeze on refinery operating margins, tapped the high-yield market in October for $205 million to repay a term loan, as well as for general corporate purposes. The offering of five-year senior secured notes carried a coupon of 13.5%. The company’s Dallas-based parent, Alon USA Energy, reported a loss of $27 million for the third quarter of 2009.

“With this change in our capitalization, we are better suited to adapt our operations to the current refining industry economics,” says Jeff Morris, Alon’s president and CEO. He says that when combined with term loan cash balances, the cost of the borrowing is less than 6% a year. Alon’s third-quarter loss reflected industry-wide declines in crack spreads (the difference between the price of crude oil and the products extracted from it) for light products, Morris says. There was also a continual reduction in sweet/sour and light/heavy spreads in crude oil that negatively affected the operating margins of the company’s refineries, he adds.

In lowering its forecast for corporate bond defaults, S&P; cited better access of low-rated companies to funding and less volatility in the market. The reopening of the bond markets for lowrated issuance and improved financial conditions will lower the cost of refinancing, the rating agency says.

This means that many defaults may be postponed to later quarters, Vazza says. 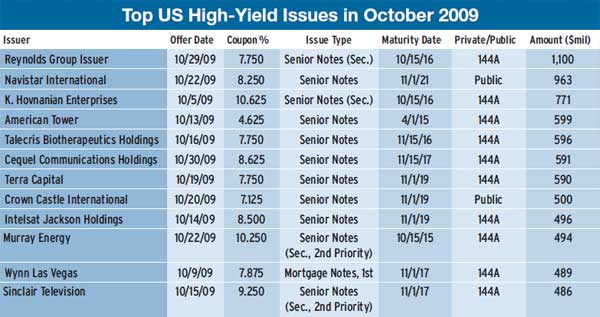