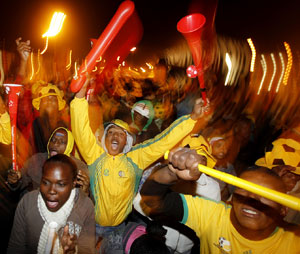 Fifty years after British prime minister Harold Macmillan spoke of a wind of change sweeping across the African continent, the sort of development he envisaged may finally be arriving. As nation after nation won its independence half a century ago, the hopes were high that freedom would bring those fledgling countries prosperity. Sadly, for most of those that showed so much promise, there have been lost decades during which military dictatorship and corruption, civil wars, foreign invasions and genocides and a combination of ideological imperatives and ineptitude held back their development to such an extent that many outside observers wrote off the entire continent as a basket case.

As a new wind of change blows across Africa, those who believe the continent is a lost cause are becoming an endangered species. Outside of Somalia there are fewer conflict zones than in living memory. There are more, and better-functioning, democracies. And while some African nations still score poorly on transparency, human rights and corruption, improved governance is gradually spreading through the continent as the economic benefits of playing by the rules become self-evident.

Certainly, Africa is experiencing economic uplift. The IMF's October 2010 Regional Economic Outlook: Sub-Saharan Africa states: "The region's economy is set to expand by almost 5% this year and a higher still 5.5% in 2011." Admittedly, that follows a 2.5% contraction in 2009. But underleveraged African banks survived the financial crisis well, and global demand for natural resources is now fueling rapid growth. "Africa's economies have recovered well since 2008," says Antony Jenkins, CEO of Barclays global retail banking arm, who is responsible for the bank's operations in 10 African countries. "Our growth forecasts across the region range from 6% to 8%."

This sort of growth is not just a short-term or cyclical phenomenon. Véronique Riches-Flores, head of thematic research at Société Générale, points out that between 2001 and 2009 real GDP growth across Africa was 4.9%—more than 1.5 percentage points higher than the overall world economy's growth.

"We have taken the view that Africa will overcome its problems and develop rapidly," affirms Arnold Ekpe, CEO of Ecobank, which is arguably the most pan-African of banks, having a presence in more countries across the continent than any other financial group. Ekpe points to its involvement in trade finance and developing new products such as regional transfer, allowing payments and money transfers across all countries, as meeting specifically African needs.

Roelof Horne, portfolio manager at Investec Asset Management, sees Africa as an area of "sustainable high economic growth for the next two decades." While acknowledging that cyclical drivers are important, especially "demand from developing countries like China and India for what Africa has in abundance—energy, metals, and agricultural opportunities," he insists there is much more to Africa than natural resources. Among the most important evolving characteristics of Africa is the emergence of improved sovereign governance, Horne believes. "National balance sheets are better," he says. "The number of conflict areas is down, currencies are more stable, the cost of equity is lower, and all of this increases business confidence."

According to Goolam Ballim, group economist at Johannesburg-based Standard Bank, improvements in public finances over the past decade mean less revenues now go into debt servicing and capital repayment, opening the way for more national investment in infrastructure.

Another factor that is promoting investment in infrastructure is the series of bilateral deals struck between Asian countries, notably China, seeking access to natural resources and markets, and African nations that receive accelerated infrastructure development in return. "Alongside China, India and Brazil are increasingly involved," says Ekpe, although he also sees the West remaining a "major partner for Africa."

Ballim says many countries across the continent are seeing rapid growth in light manufacturing due to robust domestic demand and to governments' insisting on heightened local content and sourcing, especially by multinationals embarking on new projects. "A more stable environment," he notes, "encourages domestic demand and job creation among a youthful population. This fuels a large part of overall growth and renders it more sustainable. Africa has demographics on its side."

Tip of the Iceberg
Africa also has huge untapped potential. Riches-Flores notes that with some 60% of the world's uncultivated arable land, Africa has the potential to become the world's breadbasket. "Similarly," he says, "the near-cloudless Sahara could supply the entire world's electricity demand with solar energy." Of course there are big differences between countries and regions. Ballim expects to see below-average real growth of 4% across Southern Africa, while his forecast for South Africa itself is 2.9%—albeit from a much higher baseline. "Part of the problem is the strength of the South African rand against the tumbling US dollar," he explains. Like many other emerging markets, South Africa is facing difficulties associated with a strengthening currency.

North Africa's greater reliance on exports such as auto components, tourism or off-shoring services, mainly to still-sluggish European markets, has held it back, but not much. Boubker Jai, director-general of Morocco-based Attijariwafa Bank—one of the continent's largest outside South Africa—says that official forecasts predict growth will accelerate from 4.5% this year to 5% in 2011.

Other sub-regions are now growing faster. "West Africa has benefited from the commodity boom, and with its breadth of natural resources—from oil and gas to iron ore and agricultural products, like palm oil and cocoa—we expect to see further positive growth over the next decade," Ekpe says.

Commodity market volatility is an issue, though, and there are dangers for any economy that relies too much on a single crop or natural resource. Jenkins says that several countries previously dependent on a single sector, such as Zambia (copper) or Uganda (agribusiness), are seeking to diversify their economies. "In Uganda the discovery of important oil reserves has been accompanied by government commitments to diversify and encourage SMEs to grow," he points out.

Technology Enables Transformation
Probably the main constraint on Africa's growth potential is inadequate infrastructure—physical, electronic and financial—but that too is changing. Ballim sees "really good activity in telecoms, with take-up in mobile telephony still fervent." And new technologies are bringing financial services to the 80% plus Africans who remain unbanked. "The rapid penetration of mobile telephony suggests that Africa's demographics are now ready for electronic banking, which we see as playing a far larger part of payment systems," says Ekpe. Horne adds: "Retail lending across Africa is in its infancy, but it's now rolling out, with more products becoming available."

Jenkins agrees but also points out that the banks are widening their focus from clients such as multinationals and larger local companies toward SMEs and the less affluent. He points to new ways of extending access, such as fast-growing M-Pesa cellphone-based banking systems in Kenya.

Boubker Jai notes that in sub-Saharan Africa less than 10% of the population has access to bank loans, whether for housing, vehicles and other big-ticket purchases or day-to-day consumer needs. For a universal bank like Attijariwafa with continental ambitions, this unserviced population opens up huge opportunities.

The big banks are also cooperating with local microcredit schemes. "In countries like Uganda," says Jenkins, "village savings and loans consortia are growing so fast that they now need safe custody of the cash they hold, so Barclays is offering them accounts at the nearest branch."

As banking services roll out across Africa, new financial centers are emerging. Ekpe believes that, alongside South Africa, other regional hubs including Nigeria (once it has overcome certain structural problems) Kenya, Egypt and Morocco will emerge as the drivers of financial development across the region. But while about half of African countries have a stock exchange, Horne notes that debt markets have been slower to develop. Now, however, he sees that trend changing, potentially leading to more efficient pricing of corporate bonds and derivatives and thereby generating new funding opportunities. Another sea change in wholesale markets is the move away from dollar- or euro-denominated debt. "Local-currency debt issuance now exceeds external issuance," notes Riches-Flores.

Horne sees enormous potential in the still-nascent area of public-private partnerships (PPPs). "Progressive governments are in favor of them but to date have been slow putting the necessary legislation in place," he comments.

Change is sweeping through the continent at an increasing rate. The transition from the underdeveloped to the emerging market stage is now under way in most African economies, says Riches-Flores. Horne adds that attitudes are now changing and, in terms of FDI and capital flows, "we have not even seen the tip of the iceberg."

Ballim is perhaps most bullish: "Africa's opportunity for elevated and sustainable growth has never been as ripe in 50 years," he asserts. "The springboard for growth has never had more flex."