A sustainable recovery remains as elusive as ever for many of the countries of Central and Eastern Europe. 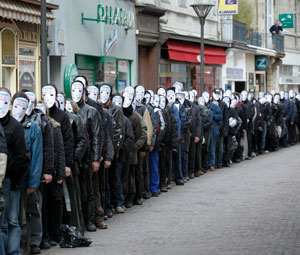 Before the fall of the Berlin Wall and the demise of the Soviet Union, investors saw the communist bloc as an entity, ignoring the countries’ significant differences. This monolithic approach was turned on its head in recent years as investors came to regard each country on its own merit. Today the pendulum has swung back, at least part way: Piecing countries into regions seems a useful way to measure their prospects.

Although all are struggling to recover from the worst crisis since the transition from communism began, Central Europe, the Baltics, Southeastern Europe and the CIS all have distinctly different prospects. Analysts agree that although they are over the worst of the economic downturn—which proved more severe because of the countries’ new openness to global trade and dependence on key but depressed EU export markets—most countries are not recovering as robustly as anticipated.

Jon Levy, a senior analyst with the US-based Eurasia Group, says the region only stabilized as a result of policy actions such as the sovereign support mechanisms agreed upon by international financial institutions and the EU and the Vienna Initiative to sustain interbank lending within the region and prevent a wholesale bank exodus. Risks remain, argues Levy, and while banking sector figures suggest that personal and mortgage loan levels are recovering, business lending is not, opening very real questions about the sustainability of the recovery taking place.

Analysts are also concerned that the recovery is so patchy. By late 2010 just about the only apparent commonality between countries across the region was the stoicism with which people have endured their new privation, so soon after the massive economic and social disruption that accompanied the transition to free markets. As many observers have pointed out, this has been a marked contrast with Greece and France, where modest government reforms have resulted in demonstrations and riots.

The European Bank for Reconstruction (EBRD), for example, reckons GDP across the region in which it operates (from Central Europe to central Asia) will increase by 4.2% this year and a similar amount in 2011, following a 5.5% contraction in 2009. But this figure is distorted by the inclusion of Turkey, where growth is expected to be 8%, and commodity-rich CIS countries. Gas giant Turkmenistan will see GDP rise 11%, and most of the other stans are also booming. Energy-rich Azerbaijan, which last year was one of the world’s fastest-growing economies thanks to large scale investments in its oil industry and an ongoing construction boom that is transforming downtown Baku, also has reason to smile. So too does Ukraine, which is recovering from the 2009 slump more dramatically than anybody would have dared hope: The expected rise in GDP of up to 5% this year will go some way toward mitigating the 15% contraction of 2009. Improved relations with Russia and a new agreement over future energy supplies are further causes for optimism, although corporate governance issues remain a big concern for investors.

The more developed countries further to the west are likely to see growth return, along with confidence, but painfully slowly. “In retrospect, there was too much growth between EU accession in 2004 and the Lehman Brothers crisis of 2008. Bank assets grew by an unsustainable 25%, and there was too much credit. Going forward, we won’t see this again,” says Andrezj Novaczek, bank analyst at ING Financial Markets. On the bright side, though, in all regions, the outlook for the bank sector looks encouraging. “The banks are edging back to health. Capital levels are rising, loan-to-deposit ratios are falling, and, for the most part, bad loans are showing signs of peaking,” says Neil Shearing, emerging markets analyst at London-based consultancy Capital Economics.

According to the EBRD, which in late October updated its forecasts, Central Europe, dominated by the economies of Poland, Czech Republic, Slovakia and Hungary, can expect 2010 growth of 2.2%, rising to 3% next year after a GDP decline of 3% in 2009. Twenty years of reform and western integration have made these countries an increasingly indistinguishable part of the EU. This will be reflected in their recovery.

“The Central European countries are well integrated into the EU supply chain and have been able to benefit fully from the German rebound: The only real concern is if this falters and impacts on exports,” says one analyst. A priority going forward will be ensuring that FDI continues to flow into the region, with governments making whatever adjustments to the investment climate are needed. There have been some encouraging signs. In late September, Audi announced plans to invest €900 million ($1.2 billion) in its Hungarian operations just days after Opel announced plans to invest €500 million, also in Hungary. But future prosperity in all four countries remains highly dependent on continued foreign investment.

The other key question is the extent to which growth may be held back by fiscal consolidation. To date this has been of most concern in Hungary, which has been struggling to reduce its sovereign and private debt burden (the latter made much worse by the huge amount of consumer lending undertaken in euros and Swiss francs, both of which have appreciated sharply against the forint). Although the deficit has been reduced sharply from the 9% reached in 2006 to an expected 3.8% by year-end (and 2.9% next year), growth will be anemic for the foreseeable future: EBRD predicts just 0.8% this year and 1.7% next.

With elections now safely behind them, the Czech Republic and Slovakia will also start taking the axe to spending, although at a more gradual rate. Poland, facing parliamentary elections in late 2011, will be even more relaxed; despite being the only EU country to grow through the downturn, with growth projected to continue this year at around 3.3%, it will nonetheless run a deficit of around 6.5% in 2011, down from 8% this year.

Compared with Central Europe, the Baltics face a rather bumpier return to normality. Owing to excessive consumer spending and overheated property sectors, Latvia and Lithuania were among the downturn’s biggest casualties, with GDP last year contracting respectively by 18% and 14.8%. To the surprise of many, Latvians in October reelected the government, despite their country’s suffering the EU’s highest unemployment rate (23%) and facing continued fierce fiscal retrenchment. Seemingly, voters have accepted that there is no alternative to the austerity. Certainly, the future looks very different from a few years ago, when the three Baltic countries were enjoying the EU’s biggest boom. The EBRD predicts this year’s negative or flat performance will translate next year into growth of around 2.5%. Others are more downbeat.

“These countries are looking at an L-shaped recovery—there are major concerns about the sustainability of their recovery,” warns Shearing, who says the long-term trend for the region is growth at around 2% a year. He argues that the region faces competitiveness concerns in its efforts to switch to an export-based growth model, not least because of the small size of the industrial sectors and economies.

Southeastern Europe (SEE) also faces adjustment problems. The EBRD expects the region’s economy to shrink by something under 1% this year before seeing a 1%-2% rise in GDP in 2011. Of all the region’s economies, Romania’s is expected to endure the sharpest contraction this year with a predicted 2% decline in GDP. Political instability, tough fiscal and bank sector retrenchment following the 2004–2008 boom and a collapse in consumer confidence have all played their part, as have concerns about foreign currency loans. Throughout SEE, proximity to Greece and a dependence on the country for exports (10% of Bulgaria’s go there, for example) and finance (Greek banks are active throughout the region) have reinforced the sense of gloom. “This region is in a real mess. Questions about competitiveness remain, especially as it seems it is the collapse of domestic demand rather than a pickup in exports that is behind recent falls in the current account deficit,” says Shearing.

Peter Sanfey, an economist at the EBRD, says continuing investor uncertainty is a problem. “Investors remain cautious and not willing to commit to new projects—yet these are needed for economic recovery to take hold,” he argues.

The one good piece of news concerns EU accession: Montenegro, Albania and Serbia have all been moving fast to prepare themselves, and Belgrade hopes it will get an invitation as early as 2016—assuming, of course, it can demonstrate cooperation with the Hague war crimes tribunal. The forthcoming privatization of Telekom Serbia and other enterprises should also prove attractive to investors, but over the longer term governments will have to press ahead with reforms.

“The crisis has revealed a lot of weaknesses in SEE—in particular, the dependence on foreign loans. Local currency markets must be developed if this region is ever to realize its full potential,” argues Sanfey.

When the credit crunch was at its peak, banks in Central and Eastern Europe (CEE) were beset by fear: that Western European parent banks, which control some 80% of the bank sector in CEE, would pull the plug on the region; that local banks would collapse under the weight of bad commercial or personal debts; and that some banks might be found to have invested in overly risky property sectors or be laden with toxic debt. In the end, none of those fears materialized. The Vienna Initiative discouraged parent banks from withdrawing from the region, but it may not even have been necessary. Local currency deposits in many cases actually rose during the downturn, making this an appealing region in which to have a presence. Almost everywhere regulation and supervision has been good. Although short-term external debt remains high in some countries—notably the Baltics but also Southeastern Europe and Hungary—which will require a continuing rollover of debt into next year at least, East Europe’s debt crisis really was the dog that didn’t bite. And as recovery slowly takes hold in the wider economy, the region looks less mangy still.

According to ING’s Andrezj Novaczek, banks across the region not only survived the crisis but emerged without any long-term damage. Today earnings are under pressure, but there are no serious liquidity or solvency concerns. Indeed, with property and other bubbles now burst, many of these banks are actually in better shape than ever. “Capital adequacy ratios are better than they were, while loan-to-deposit ratios have improved,” Novaczek says.

That said, many things have changed, though probably for the better. Foreign banks are less aggressive than they were before the crisis and more focused on building up local deposit bases. Going forward, banks will almost certainly be more cautious and lend more selectively. This will be the case especially in countries such as Romania, where banks were slower to rein in their activities: Many only started retrenching in mid 2009 and continue to do so now, which is one reason Romania is expected to be among the last countries to emerge from recession.

It has also become clear, however, that banks are now highly vulnerable to developments within the eurozone, where many are headquartered. This may mean that local subsidiaries of Greek banks in such countries as Bulgaria and Romania face funding cuts reflecting the problems experienced by the parent bank.

Large banking groups may also want to tread carefully lest other countries follow Hungary’s June example of imposing a punitive special bank tax, three times larger than similar taxes being planned in countries such as the UK and US. The tax is to be levied at 0.5% on bank assets over 50 billion forint at end 2009 with the aim of raising an eventual $837 million from financial institutions to pay toward the fiscal deficit, and will remain in place for three years. Although three banks have hinted they may withdraw in protest at the tax, which has been condemned as recklessly high by the IMF and others, prime minister Viktor Orban seems to have called their bluff. Unsurprisingly, his argument that banks should shoulder a heavier financial burden has been well received by recession-scarred Hungarians.