High oil prices are keeping government spending flowing strongly into major projects, while debt-laden Dubai has taken a turn for the better. 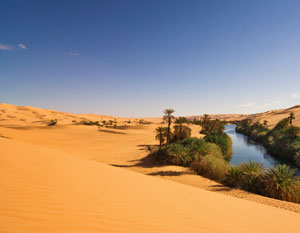 Dubai’s world-class infrastructure gave the emirate’s creditors faith that last year’s debt crisis was merely a speed bump on the road to a successful economic future for the trading hub and financial center of the Middle East. Bankers say the entire region will benefit from heavy investment in infrastructure by regional governments, backed by growing oil revenue. Meanwhile, Dubai is enjoying improving transportation and tourism receipts, as the global economy recovers.

Growth in bank lending to the private sector in the Middle East is picking up, but only compared with a weak base a year ago. However, public sector investment in infrastructure projects remains robust and is having a trickle-down effect on regional economies. High oil prices remain key to supporting public spending and restoring business confidence.

The global liquidity that is returning to the region is having a positive effect on financial markets, says Gary Dugan, chief investment officer, private banking, at Emirates NBD, based in Dubai. Lower debt costs are helping Dubai restructure its debt in an orderly fashion, he says. Dubai’s five-year credit default rate, which measures the cost of insuring debt, has declined significantly. Dubai returned to the international debt markets at the end of September with a successful two-part, $1.25 billion sovereign issue, the first since the state-owned Dubai World conglomerate announced a debt standstill in November 2009.

Meanwhile, Dubai Islamic Bank increased its stake in Islamic mortgage firm Tamweel to 57.3% from 20% and is helping to revive real estate and mortgage lending. State-owned property developer Nakheel expects to complete its debt restructuring by the end of this year. And Emaar Properties, the largest publicly traded real estate developer in the United Arab Emirates, received $3 billion in bids for its recent $450 million convertible bond issue—another signal that investors’ confidence is returning.

In neighboring Saudi Arabia, the biggest economy in the region, the opportunities for investing in infrastructure projects are enormous. Amr Al-Dabbagh, governor of the Saudi Arabia Investment Authority (Sagia), says the kingdom will offer new investment proposals worth $500 billion in energy, transport and industrial projects over the next five years.

Al-Dabbagh led a campaign that began in 2005 to make Saudi Arabia one of the world’s 10 most competitive economies by 2010, the so-called 10-by-10 mission. He nearly succeeded. The kingdom was the fifth-fastest reformer globally in the past five years, rising from 67th place to 11th in the World Bank’s Ease of Doing Business Index for 2011, which was released in November. “Saudi Arabia has been very successful at attracting a steadily growing flow of foreign direct investment [FDI] since 2005, which contributed to the country’s rapid and sustained economic growth,” Al-Dabbagh says. Unctad’s 2010 World Investment Report ranked Saudi Arabia as the eighth largest recipient of FDI, after it attracted more than $36 billion.

Saudi Arabia’s climb up the World Bank’s index was driven by major reforms, including streamlining the processes for starting a business and creating the foundations for a competitive internal credit market, according to Sagia. “This is a testimony to our work over the past five years on the creation of a pro-business environment and a knowledge-based society and in developing new, world-class economic cities,” Al-Dabbagh says.

Extensive improvements to Saudi Arabia’s transportation system are under way, including construction and upgrades of seaports, airports, highways and railroads.

Saudi Arabia’s new five-year development plan is aimed at making up for earlier underinvestment, says Keith Savard, director of economic research at Riyadh-based Samba Financial Group. “Part of this spending is designed to support still-fragile private sector confidence, but the overarching aim is to improve and expand civil infrastructure, investment in which lagged for much of the 1980s and 1990s,” he says.

Through 2014, the plan projects spending of $386 billion, an increase of 67% over the previous five-year plan. “Much of this will be directed toward civil infrastructure—especially education, which receives just over half of the total allocation,” Savard says. Another key target area is housing. The housing shortage and rising food prices are main factors behind the recent rise in inflation in the kingdom to just above 6%.

Growth in bank credit to the Saudi private sector has continued to accelerate, but absolute additions of credit remain small, according to Savard. Banks have been happy, nonetheless, to lend to major projects where the sponsor is a well-capitalized institution or in partnership with the public sector, he says.

Further to the north, Lebanon is on track to record its fourth consecutive year of economic growth above 7.5%, moderate inflation, high balance-of-payments surpluses and record growth for the banking sector. “Neither the challenges posed by a vulnerable political situation nor the threat of a global financial meltdown affected the Lebanese economy or the financial sector; quite the opposite, as both showed great resilience and growth momentum,” says Mohamed-Ali Beyhum, executive general manager of BankMed, one of the leading banks in Lebanon in terms of assets, which reached $11 billion at the end of June 2010.

The tourism, financial services and real estate sectors of Lebanon’s economy are booming, and overseas remittances are pouring in from the Lebanese expatriate community, which has increasing ties to the country, making it one of the largest recipients of such income in the world, in terms of share of gross domestic product.

“Going forward, a leap in infrastructure investment, especially in the power, telecommunications and transportation sectors, is needed to ease supply bottlenecks and bring down the cost and increase the ease of doing business in the country,” Beyhum says. “This would be equally as important as maintaining political and security stability.”

The signing of the Doha Agreement in 2008 brought an end to the period of instability that plagued Lebanon since 2005. Sustained growth is inevitably tied to stability, as well as to long-term, well-thought-out economic policies, Beyhum says. “This is essential to boosting business and consumer confidence, as well as to preserving an investment-friendly environment in Lebanon,” he says.

BankMed is a leading lender to the corporate sector in Lebanon, and its clients include 90% of the top corporate groups in the country. Its loans to the private sector increased 23% from a year earlier to $3.2 billion at the end of the second quarter of this year. The bank is also focusing on developing its business with small and medium enterprises (SMEs), which have high growth potential. BankMed recently concluded an agreement with the Overseas Private Investment Corporation (OPIC) and Kafalat, a loan-guarantee company established by the Lebanese government.

In addition to providing additional funding to its SME clients, BankMed is expanding and strengthening its retail and investment banking divisions. Although the bank is cautious about expanding internationally in the current environment, it opened SaudiMed Investment in 2008, which provides investment banking services to clients in Saudi Arabia and throughout the Middle East. In July 2010, BankMed increased its holding in Turkey-based Turkland Bank to 50% from 41%. “This reflects our confidence in the stability and future growth of the Turkish economy,” Beyhum says. “Turkey is one of the fastest-growing emerging markets.”

Europe is the largest trading partner for countries in the Middle East and North Africa (MENA), accounting for about half of their total exports, Beyhum says. Therefore, the possibility of heightened economic turbulence in Europe poses a downside risk for oil-importing countries. “The economic outlook in the region is closely linked to global developments, primarily through the impact of global economic activity on oil prices,” Beyhum says. MENA economic performance is expected to remain generally robust as a result of increasing oil prices and production, as well as supportive fiscal policies, he says.

Oil and gas production capacity is set to increase, particularly in Saudi Arabia and Qatar, underpinned by continued expansion of productive capacity, according to the International Monetary Fund’s World Economic Outlook report released in October. However, if shale gas production increases around the world as expected, the region’s gas exporters may feel the bite, the IMF says. Natural gas prices fell sharply in late 2008, as the recession dampened demand for industrial fuels in Europe. New technology lowered the cost of tapping shale gas deposits, which abound in North America.

The first shipment of liquefied natural gas from Qatar arrived at Sabine Pass, Texas, in October at a $2 billion terminal constructed by a joint venture of Qatar Petroleum, Exxon Mobil and ConocoPhillips. Though Qatar is forecasting that the natural gas glut will go away in about three years, the International Energy Agency says it could last a decade, depending on how quickly demand from India and China rises.

Egypt Presses On With Reforms 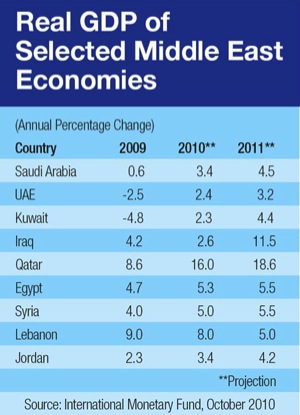 Slowing inflows to the oil and gas sector reduced Egypt’s FDI by 16% to $6.8 billion in the fiscal year ended June 30, 2010. The country will push ahead with economic reforms to achieve a target of $10 billion in FDI in fiscal year 2011, according to Rachid Mohamed Rachid, minister for trade, industry and investment. While Egypt has made impressive strides toward improving its business environment in the past five years, far-reaching reforms are still needed to attract greater amounts of FDI, the Organization for Economic Cooperation and Development says. In an analysis released in November, the OECD says Egypt should update its business regulations, find financing for much-needed industrial infrastructure investments and provide better education and skills training.

Egypt improved customs services, reduced tariffs and made far-reaching banking reforms, the review says. The country also has improved its investment policy framework. The report encourages the Egyptian authorities to improve enforcement of a recently enacted competition policy and to eliminate quasi-monopolies.

For the oil-exporting countries of the Gulf Cooperation Council, the biggest danger could be a potential flare-up of inflation. John Lipsky, first deputy managing director of the IMF, says a withdrawal of fiscal stimulus could be needed by 2011 if the recent trend toward higher prices in the GCC continues.

“Comfortable fiscal and external positions permit most GCC countries to maintain fiscal stimulus in 2010 and into 2011 if necessary,” Lipsky told a meeting of GCC finance ministers and central bank governors in Kuwait in November. GCC countries whose currencies are pegged to a falling dollar are facing an escalation in imported food prices. The short-term challenge for the GCC countries will be to support a revival in credit growth, which decreased sharply because of the financial crisis, Lipsky says.