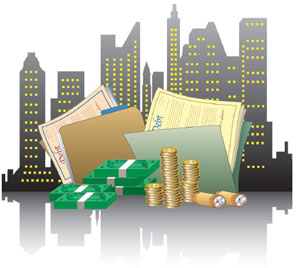 The bond market rally was given a new lease on life last month when the Federal Reserve announced it would buy $600 billion of US treasuries—and maybe more, if necessary—by the middle of next year. While the announcement was largely in line with expectations, analysts say it will ensure a further decline in rates and leave the window open for record borrowing by corporations.

Even before the Fed acted, total US high-yield issuance for October was $27.3 billion, a record for the month and down only slightly from $30.6 billion in September, according to KDP Investment Advisors, based in Montpelier, Vermont. Year-to-date issuance for global high-yield debt reached the highest level for any full year in September and continues to expand.

The monetary stimulus, known as quantitative easing, means that the Fed is monetizing US government debt, which critics contend could lead to future inflation and asset bubbles. Kansas City Fed president Thomas Hoenig, a voting member of the Federal Open Market Committee (FOMC), dissented from the action, saying that the risks entailed in the purchases were greater than the potential benefits to the economy.

Awash in Liquidity
The second round of quantitative easing, known as QE2, follows the Fed's purchases of nearly $2 trillion of bonds during the Great Recession. "No one really knows how effective QE2 will be," says Sung Won Sohn, professor of economics at Martin V. Smith School of Business and Economics at California State University. "There is so much liquidity in the economy that additional liquidity may not do much."

Fed chairman Ben Bernanke says QE2 is designed to bring down interest rates and further boost asset prices. The Fed is hoping to encourage a virtuous circle of more spending, higher incomes and rising profits that will boost the economy, Bernanke says.

The treasury yield curve actually steepened in initial reaction to the FOMC announcement. Long-term bond prices fell on disappointment that the Fed will concentrate its purchases in the five-to-six-year maturity area, rather than in longer-dated bonds.

Negative Feedback Loops
"The steepness of the yield curve holds a long-standing correlation with currency weakness," a report by Bank of America Merrill Lynch global research says. "In other words, expected inflation establishes negative feedback loops. There is no point in holding something today if its value is going to decrease tomorrow."

The weaker dollar will boost exports, but QE2 likely won't be sufficient to jar the economy out of its recent malaise, economists say. Consumers and financial institutions are simply holding too much debt and need to deleverage.

Lower-rated corporations are rushing to take advantage of the low rates in the high-yield bond market to refinance existing debt and to finance acquisitions. Auckland, New Zealand–based Reynolds Group Holdings, the maker of Reynolds Wrap aluminum foil, sold $3 billion of notes in October to help fund its $6 billion acquisition of Lake Forest, Illinois–based Pactiv, which makes Hefty trash bags. The issue was the second largest offering of high-yield debt this year after Stamford, Connecticut–based Frontier Communications' $3.2 billion note sale in March. Earlier this year, Reynolds issued $1 billion of debt in the high-yield market to finance its purchase of Evergreen Packaging, based in Pine Bluff, Arkansas, and the Whakatane Mill, a New Zealand–based paper mill.

In its latest offering, Reynolds sold $1.5 billion of 8.5-year secured notes at 7.125% and an equal amount of unsecured notes with the same maturity that yield 9%. Credit Suisse and HSBC managed the private placement. In the event the Pactiv acquisition is not consummated, the proceeds of the offering will be returned to investors.

Issue Size Increased
Houston-based Calpine, an independent power producer with 93 plants and customers in 21 states, sold $2 billion of first-lien senior secured notes due in February 2021 with a coupon of 7.5%. The size of the issue was increased from an initially planned $1.5 billion to take advantage of low interest rates. The proceeds will be used to pay down a bank loan. Morgan Stanley, Bank of America Merrill Lynch, Barclays Capital, Citi, Credit Suisse, Deutsche Bank, Goldman Sachs, J.P. Morgan, RBC and UBS managed the sale.

Georgia-Pacific, a building products and paper maker based in Atlanta, sold $1.25 billion of senior guaranteed 10-year notes in the private placement market with a 5.4% coupon. The proceeds will be used for general corporate purposes and to repay existing debt. Deutsche Bank and J.P. Morgan were the managers for the sale.

The largest high-yield offering in the US public market in October was a two-part note sale totaling $1.55 billion by Denver-based DaVita, which provides dialysis services. The company sold $775 million of 6.375% notes, due in 2018, and $775 million of 6.625% notes, due in 2020. The proceeds will be used to redeem outstanding notes as part of DaVita's debt restructuring. 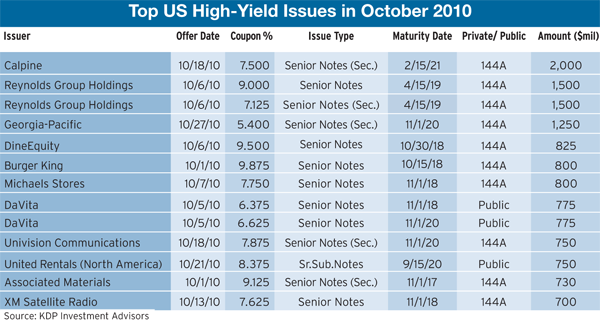 Upcoming economic data are likely to matter more for interest rates and currencies than they have over the past few months, when market participants waited for the launch of QE2, according to Bank of America Merrill Lynch. If data continue to reflect a weak US economy, expectations of an eventual Fed tightening will be pushed further out in time, the firm said in a note to clients following the FOMC's announcement. "Even though the statement did not explicitly push out the hiking cycle, the mere act of restarting asset purchases should push out the time frame for hikes," BofA Merrill Lynch says.

The US jobs data for October came in much stronger than expected, with the economy adding 151,000 jobs, the first increase since May. However, the unemployment rate remained stuck at 9.6%. The hours-worked index rose 0.4%, which could be a good omen for fourth-quarter gross domestic product, economists say. Upward revisions for August and September showed that there were 110,000 fewer jobs lost in those months than previously reported—although the net change was still a loss of 42,000 jobs for the two months. Treasuries sold off sharply immediately following the strong employment report.

The Fed's bond-buying program has reinforced optimism that the US economy will continue to grow and that corporate profits will improve, according to Torsten Slok, senior economist at Deutsche Bank in New York. The Fed's stimulus could boost GDP growth by 0.25% to 0.5% in 2011 and by 0.75% in 2012, Slok forecasts. 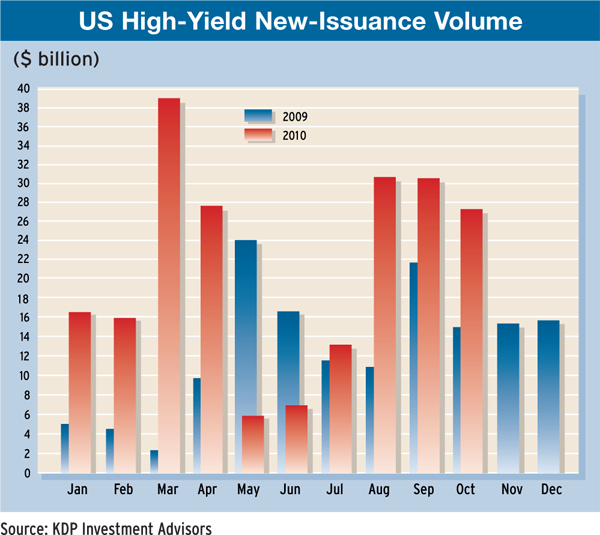