Fed Pulls Rug Out From Under Dollar

Although the Federal Reserve's main focus is not the dollar, which is the purview of the US Treasury Department, it had to know that its $600 billion asset- purchase plan would grease the greenback's skids. The Fed also had to know that much of the new money this would create would quickly find its way to high-growth overseas markets that are already fighting a flood of unwanted foreign capital, analysts say.

The dollar came under heavy selling pressure against most major currencies in the wake of the Fed's announcement, which triggered a round of complaints from emerging markets worried about controlling inflation and maintaining their global competitiveness.

"I never thought I would see the day when the dollar would be thrown under the bus, as happened [November 3] at the conclusion of the FOMC [Federal Open Market Committee] meeting," says David Gilmore, partner and economist at Essex, Connecticut–based Foreign Exchange Analytics. Although Fed chairman Ben Bernanke never said he would welcome the lower dollar that comes with printing money, the fact that it would boost exports and be a channel for inflation was there for everyone to discern, Gilmore says. "We were left with European Central Bank president [Jean-Claude] Trichet to articulate the US dollar policy for us," Gilmore says. "Trichet said he strongly trusts US officials who have assured that the US is not pursuing a weak-dollar policy."

The only thing that will save the dollar is if its continued decline leads emerging market nations to impose capital controls as they reach the point where adding further to record foreign currency reserves is not productive, according to Gilmore. These countries are already at the stage where they are forced to sell their dollars for euros and other Group of 10 countries' currencies and gold to diversify their foreign exchange risk, which adds to the dollar's decline, he says. "Capital controls would be interpreted by markets as a step closer to a trade war and the closing down of the global economy," Gilmore says. This Armageddon-like outcome would put an end to risk-taking and restore the dollar as a safe-haven bet.

The better-than-expected US employment report for October was not as much a positive factor for the dollar as it was positive for risk-taking and the carry trade, says Michael Woolfolk, managing director at BNY Mellon Global Markets. The US midterm elections, the Fed's quantitative easing, or QE2, and the jobs data were a lot for the market to digest at one time, he says. "However, they appear to point toward a higher Dow [stock market] and a lower dollar," Woolfolk says.

Given the recent record-high credit default spreads in Ireland, renewed European sovereign debt concerns could once again come to the fore, he says. This could prompt a repeat of last year's scenario, when dollar-selling turned into dollar-buying as the greenback got a safe-haven bid and dollar-funded carry trades were closed out en masse, Woolfolk says.

The Republicans took control of the House of Representatives in the election, while the Democratic Party of President Obama held on to the Senate by a narrow margin. This is likely to create a legislative gridlock. "I think the election [outcome] makes the Fed the water boy for stimulus," Gilmore says. "It will have an even larger role in supporting growth, since the fiscal policy option is shut off, or even contracts if the Bush tax cuts are not extended."

The dollar's weakness should continue in at least the very short term, as bond yields keep on descending in the wake of QE2 and investors flock to non-dollar-denominated assets, says Marc Chandler, global head of currency strategy at Brown Brothers Harriman, based in New York. Risk appetite should recover, leading to strong performances from higher-yielding currencies, along with currencies of the faster-growing economies, he says.

"What seems remarkable is that most high-income countries would welcome the Fed's baseline GDP and inflation forecasts for their own economies, but for the Fed it is not good enough," Chandler says. "The key driver of major currencies going forward will be economic fundamentals and divergence in fiscal and monetary policy." Market participants will be looking to economic data as a gauge of whether the Fed and, to a lesser degree, other central banks will provide liquidity to stoke price appreciation, Chandler says. The European Central Bank is still worried about inflation risks over the medium term, whereas the Fed is more concerned about deflation, he says.

The return of Europe's debt crisis to the headlines could be the best hope for slowing or reversing the dollar's decline, at least against the euro. "As we have argued all along, problems in the periphery of the European Union never really went away," says Win Thin, global head of emerging markets strategy at Brown Brothers Harriman. "It's just that the market's attention moved elsewhere, risk appetite picked up, and markets moved on. We continue to believe that Greece will have to undertake debt restructuring in the next year or two."

Given the upward trajectory in borrowing costs, Thin says, Portugal and Ireland will also likely have to restructure their debt. "The whole purpose of the EFSF [European Financial Stability Facility] was to get borrowing costs back down for the periphery," he says. "Otherwise, the debt dynamics unravel, and this is something we have seen time and again in the emerging markets."

The big question is whether Spain can avoid the same fate, Thin says. With a nominal GDP of approximately $1.5 trillion, Spain is almost twice as big as Portugal, Ireland and Greece combined, so a bailout of Spain would be problematic for the EU, he says.

"Contagion is in full force, as Greece, Portugal and Ireland have all been in the market crosshairs recently," Thin says. Spain and Italy are holding up better, he adds, but 10-year yield spreads to Germany and credit default swap prices for both of these Southern European countries have also been creeping up.

Better US economic data, combined with less-favorable conditions in Europe, could ultimately reverse the dollar's decline. 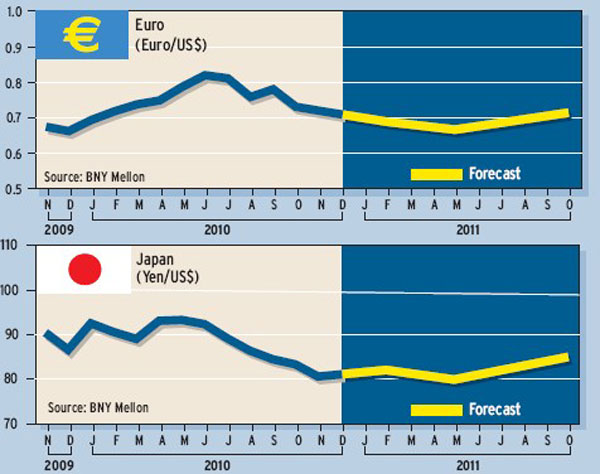 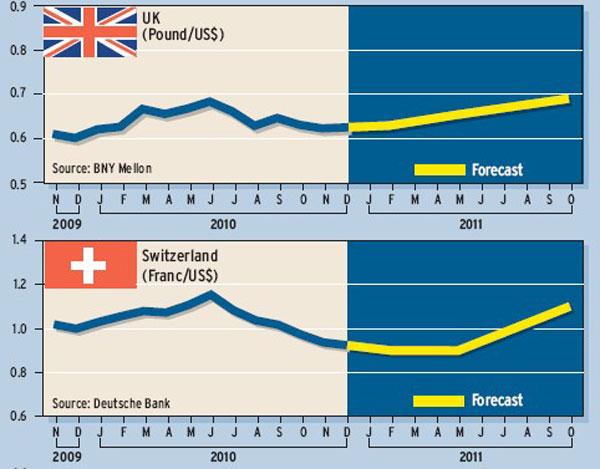 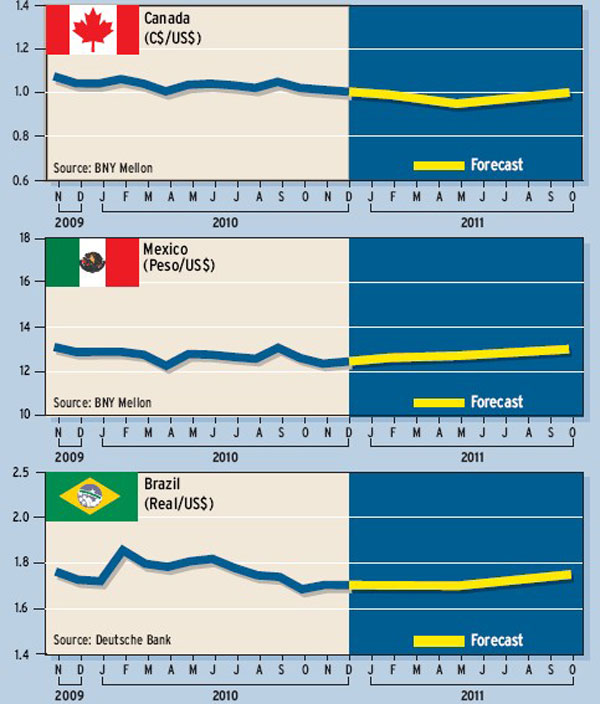 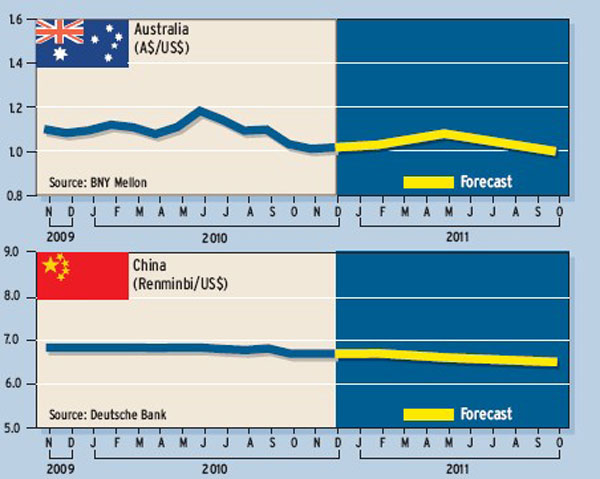 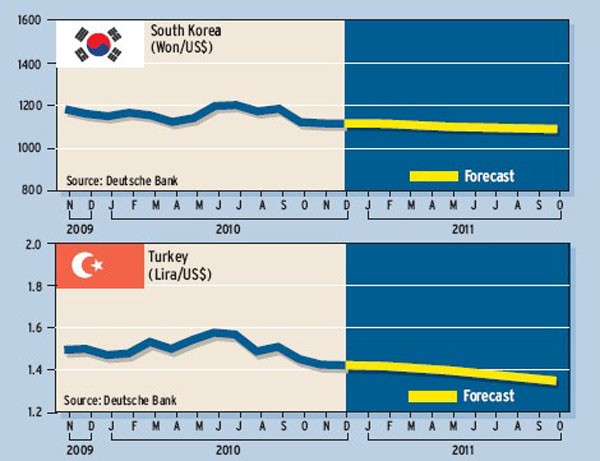