Between Aid And Contagion 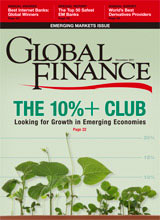 Who would have predicted that the Europeans would try to get financial support from China, Portugal would try to get investment from Brazil, French banks could try for funding from Russia, or that the US administration would criticize the “lack of action” in Europe as a way to divert attention from its own problems?

Europe and the fate of its monetary union are still dominating public debate and the attention of the financial markets. And there is a growing awareness in North America and Asia that what happens in Athens and Rome does affect pretty much every single economy in the world. The spread between Italian and German debt is the talk of the town in major financial centers as never before.

So far attempts to get the strongest emerging markets involved in helping to solve the sovereign debt crisis has not generated any clear alternative solution. Instead the heads of state of the worst-hit European countries have resigned, often to be replaced by technocrats to bring credibility and international experience when austerity is needed and when the risk of default is still pretty serious.

As a result, there is a slowdown in corporate activity and decision-making as companies wait for some kind of clarity from the Continent. And beyond Europe there is certainly no shortfall of other issues and deadlines that companies and financial market participants are managing—not least, still-evolving global regulatory changes.

At Global Finance , the last issue of the year is, as usual, dedicated to the emerging markets and their economies. We have tried to see which new economies are the fastest growing, possibly outpacing the BRICs. And for the first time we have also selected the safest banks in the emerging markets based on their long-term debt ratings and the size of their assets, much like we have done for several years on a global scale.

Working on the emerging markets issue, we saw ever-more clearly—as if we had any remaining doubts—how much the European crisis and the related uncertainty has negatively affected other areas of the world, and how correlated different economies are.