Greece’s politicians must balance growth and austerity, but it will mean walking a tightrope with no safety net in sight. 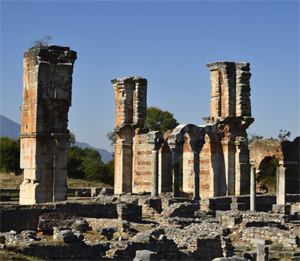 Greece needs a fresh blueprint for economic and social survival. Eurozone debt restructuring packages may dominate media headlines, but comprehensive solutions must address both the country’s bankruptcy and its recession.

Until recently, solutions have centered on reducing the debt-to-GDP ratio—which is now at 164% and projected to fall to 120% by 2020. The second leg of the stool is bondholders’ haircuts and their impact on debt servicing costs. Somewhat less heed is paid to fostering growth. According to Ioannis Sokos, interest rate strategist at BNP Paribas, all three elements must together add up to a dynamic equation: The primary deficit (revenues minus expenditures), debt servicing costs and growth operate in conjunction. Sokos says: “Without a specific plan to bring Greece out of recession, we may end up increasing debt-to-GDP in coming years.” While private sector involvement (PSI) can be instituted with the stroke of a pen, growth will take time to achieve.

Banks play a pivotal role as growth engines with business lending. If restructuring or PSI threatens the viability of Greek banks’ balance sheets, unintended consequences could stymie economic development. So credible recapitalization plans for Greek banks and pension funds are paramount, and examiners from BlackRock Solutions, a specialist risk analyst, have been in Athens auditing nonperforming loans to determine the required funds for recapitalization. But Greek banks and public pension funds are being forced by the government to hold the toxic Greek bonds. If external funding were cut off this means there would be no viable and active banking system, credit or pensions.

While Greece struggles to whittle down public sector deficits, the country must also take steps to improve its low export competiveness. That may take many years. It has been suggested by various macro analysts that an exit from the eurozone, accompanied by currency devaluation, might prove a drastic remedy. Rahman is skeptical, branding that extreme proposal as a “fairytale” for a nation that lacks an export industry. “At least the EU and the eurozone provide structural funds to finance capital investments and other resources. Without them, Greece would find the outside world much colder than it is within.”

The pain of austerity, wage adjustments and unemployment—which hit 16.5% in October—is taking its social toll. Gallup published a poll in September, based on surveys conducted in April and May of this year, and respondents classified their state of wellbeing as thriving (16%), struggling (62%) and outright suffering (25%). The latter segment that has tripled from 7% in 2007. On another grim note, unlike most other Europeans, the majority of Greeks expect their lives to be worse five years hence.

Draconian reforms in labor markets, civil institutions, tax collection and healthcare have been proposed, with some already passed as legislation. The government, however, is dragging its feet on actual implementation. For instance, legislation became effective on July 2 easing restrictions on professional positions that did have big barriers of entry, which include taxi and truck drivers, pharmacists, lawyers, engineers and notaries. The changes have provoked a series of strikes in the various sectors. In reaction, with an eye on all-important tourism, transport minister Dimitris Reppas has backed down on several changes in taxi licensing restrictions.

Labor market restrictions are also problematic. There are strict limits on allowing overtime work or firing more than a tiny percentage of a workforce, while levels of severance pay are high, as are union-agreed minimum wages. Wages in the public sector have been falling—but in an inappropriate fashion, according to Nicholas Economides, professor of economics at New York University’s Stern School of Business. He explains how the government failed to evaluate civil servants to determine who was redundant and who was effective. Instead, lawmakers simply cut the maximum wage. “So qualified people with higher salaries are now forced to the same wage level as unproductive ones,” says Economides.

Then there is the judicial system, which provides its own impediments to commercial flow. “The average commercial dispute will take almost three years to resolve in the courts,” says Costas Meghir, professor of economics at Yale University. Few financial fraud cases are prosecuted, which has eroded investors’ confidence in the Athens stock market. Meghir notes that the time period required to set up a company is one of the longest in the world. He says that those delays reflect a pervasive setting of corruption and bribery, and civil servants have grown to expect “hefty tips to get things done on time.”

Tax evasion is rampant—and made worse by the prevalence of small businesses and the self-employed, including relatively wealthy professionals like physicians and dentists. Although the number of tax collection offices exceeds that of many other countries, collectors have responded to pay cuts with ‘go slow’ actions.

"Without a specific plan to bring Greece out of recession, we may end up increasing debt-to-GDP in coming years."

The state has attempted to finesse difficulties in collection by raising value-added tax to 23% on many items in the past 18 months. “People hide the transactions,” Economides reports. For example, restaurant owners are easily tempted to present diners with doctored bills. He says: “The average tourist doesn’t understands the difference between those and an official state receipt.”Meghir does not believe the current tax collection system, dogged by incompetence and corruption, is equipped to combat the level of evasion. “It must be privatized,” he urges, which may require outside auditors. Already, policymakers have admitted teams of foreign technical experts to help key ministries. They generate huge resistance, but Rahman notes: “If reform programs continue to slip and implementation remains suboptimal, it will be questionable how much agency Greece retains over lending packages.”

The massive growth and boom of the 1950s and 1960s are a distant memory, from a time when the country had lively operations in mining, steel, cement and heavy industry. With a literate labor force, there is no reason Greece could not revive, say, auto manufacturing, and export to the Middle East. But who wants to build plants, with militant labor laws and strong unions imposing conditions?

Current political parties are floundering, with both sides implicated in past mistakes and misrepresentations. And neither group is willing to accept blame. The conservatives, previously in power, fudged debt and deficit goals to bring Greece within the eurozone.

The left-wing Pasok party won the 2009 election on a platform that promised not to impose austerity. “People expected to receive money from the government, not the other way around,” Economides says. So today’s socialists lack the vigor to execute reforms. The conservative opposition pleads for a growth agenda, but never details what measures it would put in place. They do claim that reducing taxes would, in fact, slash the deficit. Meghir agrees that rates could be reduced if the tax base is broadened by introducing more robust collection measures. Blame avoidance is happening on both sides, and they both tend to bash Brussels for their woes.

A group of economists and senior Greek policymakers, gathering at the London Business School on October 21, produced a white paper entitled Greece: The Way Forward. It is essential, they argued, for the government to encourage ownership and communication and promote engagement among constituents. The clear and present dangers of public disorder should galvanize all parties to work together in a joint effort. Ongoing dissent suggests the full gravity of the crisis has not yet been accepted. 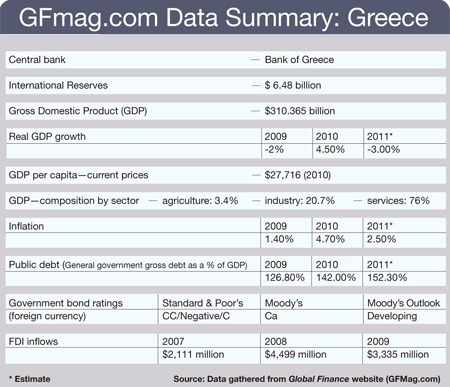