With market yields nearing 10%, investors rushed back into the high-yield corporate bond market in mid-October to take advantage of low prices and spreads to Treasury bonds of 900 basis points.

“Spreads are approaching levels we would expect to see in recessionary times,” according to Neuberger Berman, which manages approximately $13 billion of high-yield fixed-income securities for institutions and individuals. Treasury spreads rose above 1,000 basis points during the recessions of 1990 and 2002.

Current high-yield valuations look attractive, Neuberger Berman says. The current default rate for the trailing 12-month period is 1%, but the market is now pricing in an implied default rate in the 9% area, it says.

During the last two weeks of October, high-yield bond funds, which were pummeled in mid-August, took in a record $7.9 billion of inflows, as both retail and institutional investors dived back into the market, according to EPFR Global, a subsidiary of Informa of the UK. It said that better-than-expected US economic growth in the third quarter, a lack of negative corporate earnings surprises and Europe’s progress toward reaching an agreement on containing the eurozone’s debt crises encouraged investors to put more emphasis on returns. Investors in US debt also rotated out of low-yielding short- and intermediate-term debt into bonds.

Worries about the European debt situation virtually halted new-issuance activity in the US high-yield bond market in August. There was a modest recovery in September, with $6.4 billion of new high-yield corporate bonds issued in the month. The pickup continued in October, when $7.9 billion of high-yield bonds coming to market, according to KDP Investment Advisors, based in Montpelier, Vermont.

San Antonio, Texas–based Kinetic Concepts, which manufactures products for wound care and tissue regeneration, was the leading issuer of high-yield bonds in October. The company was purchased and taken private by an investment group led by Apax Partners for $6.1 billion. Its stock was delisted from the New York Stock Exchange.

CSC Holdings, a subsidiary of Cablevision Services, based in Bethpage, New York, issued $1 billion of senior notes due in 2021. On October 31, the company announced tender offers for outstanding senior notes. 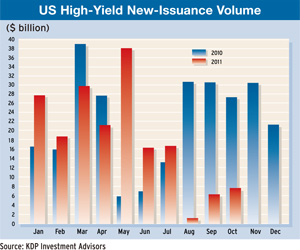 Although the US high-yield market attracted buyers, investors were less interested in risk with European characteristics, as eurozone policymakers pushed for a credible plan to settle the debt crises, according to EPFR Global. Redemptions from European bond funds in late October hit their highest level since early August. Europe, Middle East and African (EMEA) bond funds posted outflows for the 16th consecutive week.

Global bond funds, which typically have significant exposure to developed-market European debt, also recorded outflows. Flows into US bond funds favored the long end of the yield curve, the goal of the Federal Reserve’s Operation Twist.