The US market for initial public offerings sprang to life in November, following a two-month drought.

The successful $700 million offering by Groupon, which was the largest IPO by a US technology company since Google went public in 2004, triggered an avalanche of IPO pricings and filings, even as the stock market continued to be rocked by the European debt crisis.

Groupon, which negotiates big discounts with businesses and sends the deals to subscribers via email, rose 31% in its first day of trading on the Nasdaq Stock Market, valuing the company at $16 billion. Chicago-based Groupon sold only a 6% stake in the company in the underwriting led by Morgan Stanley, Goldman Sachs and Credit Suisse.

“Groupon’s IPO is a significant icebreaker in an IPO market that has been essentially shut down since mid-August,” Renaissance Capital commented on its website. “The IPO floodgates have opened.” Renaissance said the IPO calendar has been building, including Internet-related companies Angie’s List, a membership service that compiles consumer ratings of local companies, and Zynga, which offers computer games, such as CityVille and FarmVille.

Groupon’s first-day gain of 31% was well below the 135% jump by China’s Qihoo 360 Technology in its debut in March. Qihoo 360, which provides searches on the Internet and mobile platforms in China, had the biggest first-day rise so far this year. LinkedIn, a professional networking site, had a gain of 109% on its first day of trading in May.

For the year-to-date as of early November, Internet-related IPOs averaged a 28% first-day gain, compared with a 7% rise for non-Internet IPOs, according to Dealogic. Redwood Shores, California–based Imperva, a data-security software company, rose 33% in its November 9 debut on the New York Stock Exchange. J.P. Morgan and Deutsche Bank were lead managers on the deal, which raised $90 million.

LaShou Group, China’s Groupon equivalent, had filed terms for a $75 million IPO as Global Finance went to press. Among the larger IPOs on tap for late November were Delphi Automotive, which planned to raise $554 million, and Manning & Napier, an independent investment management firm that was seeking to raise $200 million in its IPO. Both companies plan to list on the NYSE.

Altogether, 16 IPOs in the US were set to price in November, in addition to Groupon, fertilizer producer Rentech Nitrogen and energy firm Enduro Royalty Trust, which had already priced in the first week of the month, according to Renaissance Capital. The 11 deals on the calendar for the week beginning November 14 promised to make it the busiest week for IPOs in four years.

San Francisco–based Yelp, which operates a social networking, user review and local search website, hired Goldman Sachs and Citi to handle its IPO in the first quarter of next year. Yelp, which rejected a $500 million takeover offer from Google in 2009, expects the IPO to value the company at about $1.5 billion to $2 billion.

One ADR is equivalent to one common share traded on the Milan stock exchange. The ADRs are traded in the over-the-counter market.

Pirelli, the world’s fifth largest tire manufacturer, is a leader in the high-end segment of the market with a high level of technological content. Last year it won the exclusive contract to supply tires for the Formula One racing series through 2013.

J.P. Morgan also announced that it was selected as successor depositary bank for Chile’s Lan Airlines—one of the largest airlines in Latin America. The ADRs are traded on the NYSE. 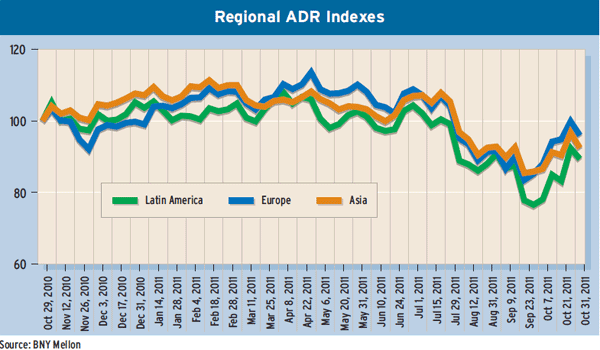