Risk aversion appeared to be creeping back into the markets in early November, as the initial euphoria about the eurozone’s master plan to solve the debt crisis began to fade. Italy’s bond yields rose and European bank shares declined.

Europe’s “grand plan” was sorely lacking in detail, particularly with regards to potential leverage of the European Financial Stability Fund (EFSF), according to a report published by Karen Ward, senior global economist at HSBC. In general, the EU summit delivered an agreement that confirmed various drafts discussed in advance of the meeting.

An important question is what role the European Central Bank will play from this point forward, Ward says. “It appears the ECB will continue buying debt at least until the leveraged EFSF is in place, but will it actually replace the ECB’s Securities Market Program? If it does, we are concerned about a lack of firepower,” she says.

Ultimately, the HSBC report notes, there are only two options for creating a firewall: the ECB’s balance sheet or the German balance sheet. “If the ECB is not the backstop, it is unlikely the firewall can be big enough to be credible,” it adds.

Richard Grace, chief currency strategist at Commonwealth Bank of Australia, says that while there are large downside risks to the global economy, “we don’t expect a large further downward revision to growth.”

Once the current period of risk aversion surrounding the European sovereign debt crisis subsides, the dollar will begin to decline, and the commodity currencies, such as the Australian and Canadian dollars, will appreciate going into the year-end period. “They already have depreciated from their late-July highs, reflecting the recent downward revisions to global growth and the subsequent declines in commodity prices,” Grace says.

The global economy is still forecast to grow at a slightly above-trend rate of 3.8% in 2011 and 2012. “Naturally, if there is a further slowing in global economic activity, we would anticipate that both commodity prices and the Australian and Canadian dollars would decline further,” he says.

Interest in the offshore renminbi market in Hong Kong reflects expectations that the Chinese currency will continue to appreciate, Grace says. The offshore market has grown exponentially since it was inaugurated last July. Cross-border trade settlement in Hong Kong increased 17-fold in the past 12 months, he says. Total offshore renminbi deposits amount to roughly 10% of Hong Kong’s total deposit base.

Nevertheless, there remains a lack of depth in offshore renminbi-denominated financial instruments, despite the rapid growth in the so-called “dim sum” bond market, according to Grace.

Grace says the Japanese yen will continue to be a safe-haven currency because Japan continues to run a regular annual current-account surplus as a percentage of GDP, maintains a large international investment surplus and has a sophisticated local bond market and a reasonable amount of liquidity in terms of daily global foreign-exchange turnover.

It is less likely that the yen will be used as a funding currency in the carry trades over the next few years, for two main reasons, Grace says. First, there are now a number of advanced economies that have extraordinarily low interest rates with highly liquid currencies that can be used as a substitute for a carry-trade funding currency. And second, the global economy and the global investment environment have entered a period of high uncertainty owing to the buildup of large sovereign debt in a number of advanced economies.

Tommy Molloy, a chief dealer at FX Solutions, a foreign exchange broker based in Saddle River, New Jersey, says the prevailing economic view is that Europe is dipping into recession again. “While the global economy is slowing, it is not a major problem outside of Europe,” he says. “China is a consuming machine.”

Much of the trading activity in the foreign exchange market recently has been centered on headlines about Europe’s debt problem. “Volume has been quite significant,” Molloy says. “It’s as busy as I have seen it in a long time.” While intraday volatility has also been high, the market has been orderly, he says. The ranges for periods of a week or longer have been tame.

As of early November, the deviation between the strongest G10 currency of the year to date and the weakest was less than 8%, according to a report by Deutsche Bank. The average difference for the past 30 years was 23%, while the narrowest was 9.7% in 2004.

“In 2012, barring contagion finally driving European capital out from the core, G10 ranges could again prove frustratingly narrow relative to the breadth of the macro problems,” Deutsche Bank says. It adds that 2011 has been regarded as one of the most difficult years for macro trading, and “as we look to 2012, it is easy to see the global macro environment remaining at least as tense as this year.” 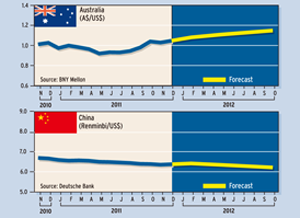 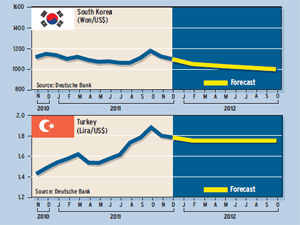