Foreign buyers accounted for 76% of the total value of US oil and gas mergers and acquisitions in the third quarter of this year, with 22 deals valued at $37.3 billion, according to PwC US. 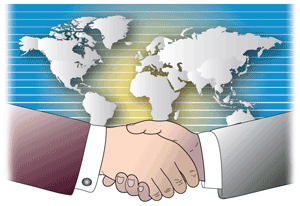 The total value of US oil and gas deals in the quarter rose by 135% from the same period a year earlier, with 46 deals totaling $48.8 billion.

“Despite a number of headwinds in the third quarter, with volatile global equity markets and commodity prices, deals in the energy sector continued, as companies sought to take advantage of opportunities in shale to gain technology know-how and diversify service offerings,” says Rick Roberge, a principal in PwC’s energy M&A; practice. “Large multinational corporations are able to withstand market volatility, and we’re continuing to see them push through and get deals done, with their focus primarily in the upstream sector and shale-related plays.”

With private equity deals on the rise and corporations focused on energy and maximizing the value of current assets, “we expect energy to remain one of the hottest sectors for deals,” Roberge says.

The energy and power sector was the most active worldwide in the first nine months of 2011, followed by financial companies, according to Thomson Reuters. Some 17.2% of all M&A; transactions announced in the period were energy and power deals.

The boom in oil and gas mergers accelerated in October, getting the fourth quarter off to an impressive start, as buyers sought to take advantage of depressed stock prices. There were five multibillion-dollar energy deals in the Americas in October, led by Houston-based Kinder Morgan’s acquisition of crosstown rival El Paso, creating North America’s largest natural gas pipeline operator. Including $3.8 billion in debt, the deal was valued at $38.5 billion, making it the largest energy deal since Exxon Mobil purchased XTO Energy for $40.8 billion in an all-stock deal in December 2009, according to Standard & Poor’s Capital IQ. El Paso agreed not to accept any higher offers and would be obligated to pay Kinder Morgan a $650 million breakup fee under certain circumstances.

There were 13 deals related to shale gas in the US in the third quarter of 2011, totaling $22.6 billion, or 46% of the total oil and gas deal value, PwC said in its quarterly M&A; analysis of the sector. Upstream deals made up 52% of activity in the quarter.

The Marcellus Shale Formation of marine sedimentary rock extends throughout much of the Appalachian Basin of the eastern US. It contains large natural gas reserves that are being tapped using new drilling technology, such as horizontal drilling and hydraulic fracturing.

Utica Shale, a rock formation that is located a few thousand feet below the Marcellus Shale, is another promising source of natural gas that is starting to be developed. Natural gas companies have spent billions of dollars this year acquiring Utica Shale acreage, particularly in eastern Ohio.

“Interest in the Utica Shale also continues to build each quarter, as companies are attracted to the potential for a stacked play and the cost savings associated with shared infrastructure, given its proximity to the Marcellus,” Haffner says. Of the shale deals in the third quarter, four were transactions involving the Marcellus Shale—totaling $3.6 billion, and four were Utica Shale deals—with a total value of $3.1 billion, according to PwC US. In its quarterly reports on the US oil and gas industry, PwC analyzes transaction data from IHS Herold, based in Englewood, Colorado.

Kinder Morgan’s purchase of El Paso will more than double the size of its pipeline network to about 80,000 miles. “We believe that natural gas is going to play an increasingly integral role in North America,” CEO Richard Kinder said in announcing the deal. “We are delighted to be able to significantly expand our natural gas transportation footprint at a time when it seems likely that domestic natural gas supply and demand will grow at attractive rates for years to come.” Kinder, a former CEO of Enron, founded the company in 1997 with his colleague William Morgan, when they acquired the general partner of a small, publicly traded pipeline limited partnership, Enron Liquids Pipeline.

Kinder Morgan said that once the El Paso deal closes in the second quarter of 2012, it plans to sell off El Paso’s exploration and production assets to reduce its debt. India’s Reliance Industries and Norway’s Statoil, as well as Los Angeles–based Occidental Petroleum are expected to be among the bidders for the assets, which include more than a half million acres of shale fields. China’s state-controlled CNOOC is another potential bidder, as it seeks to expand its shale assets in the US.

Statoil, Norway’s biggest oil company, agreed in October to buy Austin, Texas–based Brigham Exploration for around $4.4 billion in cash. The deal will give Statoil access to 375,000 acres in the Bakken shale formation in North Dakota, where the production of tight oil, or oil found in the same rocks as shale gas, is fueling a boom in the local economy.

Statoil, which is majority-owned by the Norwegian government, also has formed joint ventures with Chesapeake Energy to develop gas fields in Pennsylvania. The Norwegian company is facing declining production at home, where its fields are maturing.

China Petrochemical, also known as Sinopec, agreed in October to buy Canada’s Daylight Energy, an oil and gas exploration and production company with shale-gas reserves. The Beijing company agreed to acquire Daylight through a scheme of arrangement valued at about $2.1 billion. China, the world’s biggest energy user, is seeking access to technology to develop its own shale-gas deposits, which could exceed those in North America.

Among other US energy deals announced in October, Superior Energy Services of New Orleans agreed to merge with smaller rival Complete Production Services, based in Houston.

The cash-and-stock deal was valued at about $2.7 billion. Superior is seeking to build up its pressure-pumping fleet to take advantage of growing demand for fracking, whereby a mixture of sand and water laced with chemicals is pumped into wells to retrieve oil.

The combined company will retain the name Superior and will be led by David Dunlap, the current president and CEO of Superior.

AmeriGas Partners, which is the largest US distributor of propane, agreed to buy the propane operations of Dallas-based Energy Transfer Partners, in a cash-and-share transaction valued at about $2.9 billion. Propane is a by-product of natural-gas processing and petroleum processing. It is bottled and sold to power backyard grills and heat homes and has other industrial and agricultural applications. 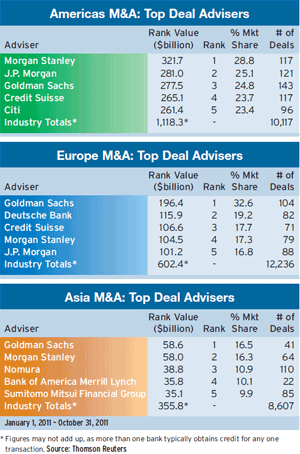 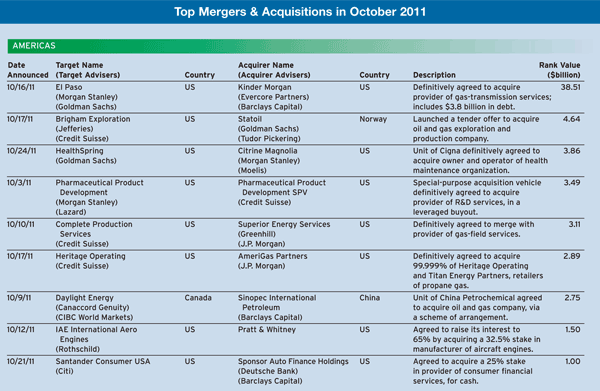