Pent-up demand following a shutdown for Hurricane Sandy combined with near-record-low interest rates to release a torrent of new corporate bond issues in early November. AbbVie, the pharmaceutical unit of Abbott Laboratories, sold $14.7 billion worth of bonds in the largest offering in the US corporate debt market in more than three years.

The six-part deal came ahead of Abbott’s split into two companies, a pharmaceuticals business and a medical-devices manufacturer, which will retain the Abbott Laboratories name. The offering, which was sold as a private placement, was the largest dollar-denominated corporate bond sale since Roche Holding issued $16.5 billion of debt in February 2009.

FED CLEARS PATH
Led by AbbVie, issuers in the US high-grade bond market sold more than $22 billion on November 5, the eve of the US presidential election. High-grade corporates have benefited from the Federal Reserve’s decision in mid-September to stimulate the economy through the purchase of $40 billion per month of mortgage-backed securities. Some investors are unloading mortgage-backed bonds and reinvesting in corporate debt.

The US corporate bond market closed for three days owing to the hurricane. When it reopened on Thursday, November 1, some $12 billion of bonds were sold, including $3 billion in a three-part offering from BP Capital Markets.

The next day was the busiest Friday of the year to date in the market, with more than $15 billion of new issues, led by Verizon Communications’ $4.5 billion four-part sale.

HIGH-YIELD ISSUANCE
Issuance in the high-yield bond market totaled $34.4 billion in October, the third-highest monthly total for the year to date, behind the record $44.6 billion in September and $37.2 billion in February, according to KDP Investment Advisors. 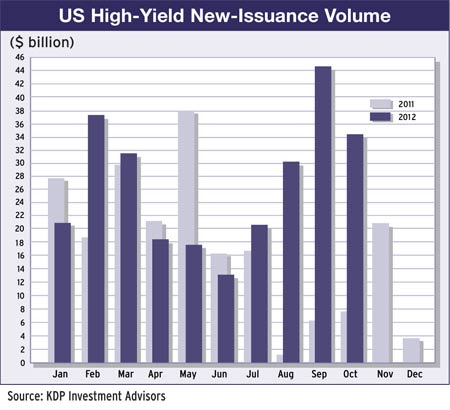