Global Finance presents its annual ranking of the Top 50 Safest Banks in the Emerging Markets. 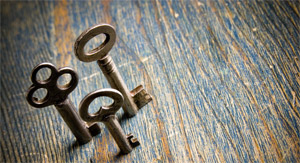 Banks in the Arabian Gulf and Asia have strengthened their hold on the rankings of safest banks in emerging markets, accounting for 43 of the safest 50 listed by Global Finance magazine, compared with 39 a year ago.

The downgrading of South African banks led to Absa Bank’s falling out of the global ranks, with the result that no sub-Saharan banks are included in the list.

The four top-scoring banks each hold two AA- ratings and one A+ rating. The top three are unchanged from last year: China Development Bank receives the highest mark on the basis of its asset size, followed by Agricultural Development Bank of China and National Bank of Abu Dhabi. National Bank of Kuwait moves up one place to fourth, replacing Banco Santander Chile, which falls to 15th position. 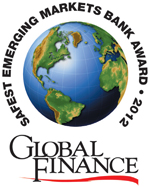 Global Finance ’s listing of the safest banks in emerging markets is based on ratings assigned by the three major credit rating agencies. To be eligible for consideration, banks had to be among the largest 500 emerging markets banks in the world, based on asset size, and they had to have at least two ratings. Subsidiaries of developed markets banks may be included, provided that they are not 100% owned. Eligible banks are awarded points corresponding to the level of each of the ratings they hold. If a bank has only two ratings, then an implicit score for the third rating is calculated by taking the average of the two actual ratings and deducting one point. If several banks have the same score, they are ranked by asset size.

Four countries supplied three-fifths of the Safest 50 banks—a greater concentration than last year. Saudi Arabia and South Korea supplied nine banks each, and China and the United Arab Emirates six each. From Latin America, only Chilean banks scored highly enough to rank in the top 50. Banks from the Arabian Gulf provided 22 of the top 50, the same number as last year.