A batch of better-than-expected US economic data, including nonfarm payrolls and housing prices, gave the dollar a lift last month. 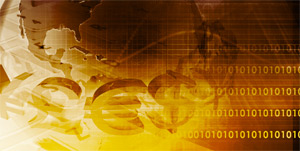 Analysts said the signs of strength diminished the need for the Federal Reserve to take additional quantitative-easing steps and strengthened the greenback’s appeal as a safe haven. Increased spending by consumers and the US government helped to keep the economy afloat amid a global economic slowdown. Meanwhile, the euro area’s jobless rate rose to a record high of 11.6% in September, as weakness in the peripheral nations spread to the core of the 17-nation bloc and German factory orders fell sharply. Worries about Spain’s reluctance to request a bailout program and Greece’s wrangling with austerity measures made it appear as if the eurozone’s debt crisis was morphing into a chronic illness.

“We retain a favorable outlook for the dollar on a medium-term basis,” says Marc Chandler, global head of currency strategy at Brown Brothers Harriman. “Our big-picture view is that the dollar is carving out an important bottom, after selling off in the third quarter as policymakers moved to reduce the extreme tail risks.”

FISCAL CLIFF LOOMS
Still, uncertainty about how the so-called “fiscal cliff”—the expiring tax cuts and the new spending cuts set to hit in 2013—will be dealt with is clouding the dollar’s outlook. “If we go over the fiscal cliff, the US [economy] is back in contracting mode, and the Fed may feel better keeping its powder dry until it knows just how large the looming cliff turns out to be,” Chandler says.

October readings for purchasing managers indexes (PMI) in the eurozone remained weak, underscoring the difficulties facing nations that are trying to tighten fiscal policy in a recessionary environment, he adds. “Good US data are pushing the euro lower, not the dollar,” Chandler says. The dollar is rising on the relatively better outlook for the US economy.

The US jobs report for October was stronger than expected but does not necessarily change the dynamic regarding Fed monetary policy, according to Chandler. He notes that job growth continues at a subpar rate but that the economy is not weak enough to result in a panic move from the Fed.

JAPAN NEEDS WEAK YEN
The dollar rose to a six-month high against the Japanese yen in early November, with Japan’s dependence on exports reinforcing the need for a still weaker yen. The Bank of Japan (BOJ) expanded its asset-purchase program and created a new lending facility to provide unlimited funds to financial institutions at 0.1%. “It is unclear if the new facility will prove useful, since the problem in Japan is one of [lack of] demand for lending, not availability of funds,” Chandler says.

Market participants were disappointed with the BOJ’s announcement that it would add 11 trillion yen ($137 billion) to its balance sheet, since they were expecting more.

China’s renminbi declined in early November after the People’s Bank of China weakened its reference rate ahead of the once-in-a-decade leadership change in the Chinese Communist Party. On November 1, the central bank made a record one-day injection of $28 billion into the banking system through open-market operations.

A wave of deregulation is about to sweep China, according to a report entitled “China’s Big Bang,” by HSBC economists Qu Hongbin, Sun Junwei and Ma Xiaoping. A series of reforms will revolutionize China’s financial system, they predict. “In fact, there are clear signs that China’s new leaders, who will take power in early 2013, will make speeding up reform top of their policy agenda in the coming years.”

“We think interest rates will be liberalized, the bond market will double in size, and the renminbi will become convertible within five years,” HSBC analysts add. “These changes would not only make capital allocation more efficient, boosting the private sector, but also provide the middle class with greater choice about where to put their money so they can earn a higher return and therefore spend more.”

Making the renminbi a fully convertible currency is the ultimate goal of China’s exchange rate reform, confirms the HSBC report. The renminbi exchange rate is much closer to its equilibrium level after appreciating 30% against a basket of currencies since it was de-pegged from the dollar in 2005, it adds. In April, China doubled the renminbi’s trading band, signaling a move toward a more market-driven currency regime.

Meanwhile, there is little doubt that Chinese policymakers will gear up both monetary and fiscal easing after seven consecutive quarters of economic slowdown, likely leading to a modest recovery in the coming quarters, HSBC says.

Analysts at Barclays Bank say that while China’s new leaders are likely to push ahead with structural reforms and take modest measures to consolidate the stabilization in economic growth, there will be neither immediate nor drastic changes in policy or another big stimulus package. Market participants may find this disappointing, they add.

US ELECTION IMPACT
The immediate impact of the US presidential election was dollar-negative, since the return of Barack Obama for another four-year term made it more likely that the Federal Reserve would continue with an accommodative monetary policy, according to Phil McHugh, trading floor manager at Currencies Direct, a London foreign exchange broker and international payments provider.

“The election outcome provided the market with some certainty,” McHugh says. “The Fed will keep its foot on the gas until the unemployment rate declines.”

The initial reaction faded quickly, however, leaving the FX market with no clear direction, McHugh says. The bullish effect on equity markets from “risk-on” trading gave way to a renewed focus on the US fiscal cliff and the problems in the eurozone.

Congressional gridlock on the budget seems likely to continue, putting the US at risk of losing its triple-A credit rating, according to McHugh. “Polarization will remain in the short term,” he says. Standard & Poor’s already stripped the US of its triple-A rating in August 2011 over the debt-ceiling issue, although Moody’s Investors Service and Fitch did not follow. Fitch warned on the day after the election that a US downgrade would be likely by late 2013 if the US fiscal outlook remains unresolved.

STATUS QUO INTACT
With president Obama securing a second term, the Fed’s accommodative stance will be extended, according to currency strategists at HSBC. In addition, there is a reduced threat of trade and currency tensions with China.

“The last thing the world needed, at a time of economic fragility, was a fresh stand-off between these two economic superpowers,” HSBC strategists said in a report. “Although the outcome [of the election] has many ramifications, the FX market appears determined to distill it down initially to the implications for monetary policy.”

In many respects, the “risk on” mood was largely an announcement effect that will be challenged by the looming fiscal cliff, according to HSBC. It may be possible for Democrats and Republicans to agree on letting payroll tax cuts expire, along with the extended unemployment benefit program, strategists say. “But on the issues of scheduled increases in income taxes and spending cuts, the two sides appear to be poles apart.”

RISK APPETITE SWAYS
Following Obama’s reelection victory, analysts at Barclays Bank advised clients to cut their foreign exchange carry positions in the Indonesian, Brazilian and Russian currencies that are funded in Japanese yen. A carry trade involves selling a currency with a low interest rate, such as the yen or the dollar, and using the funds to buy another currency yielding a higher rate of interest.

“We think the level of carry earned by holding these positions does not compensate investors for the rising risk as year-end approaches, and our clients’ risk tolerance is likely to retrench as congressional gridlock looms,” according to a report by Aroop Chatterjee, Koon Chow and Jose Wynne of Barclays’ FX research department. “For these reasons, we think the long carry theme deserves a break,” they said.

While the fiscal-cliff debate is unlikely to trigger a recession, heightened uncertainty will make market participants increasingly apprehensive, Barclays analysts note. This would build risk premiums into the levels of all risk assets. “As a result, we would expect risky currencies to come under pressure,” the bank’s analysts say.

POSITIVE SURPRISE?
With more than $600 billion of spending cuts and tax increases slated to go into effect on January 1, 2013, the stakes are high for the US economy, the financial markets and the world, says Karl Schamotta, senior market strategist at Western Union Business Solutions. “Because the all-important middle class would bear the brunt of these changes, the financial markets have tended to assume that politicians will do the sensible thing and come to some sort of agreement prior to the deadline,” Schamotta says. If there is a compromise, “we could see the rarest of tail risks emerge—a positive surprise for the global economy,” he adds.

With Obama ensconced in the Oval Office for another four years, the House under Republican control, and the Senate held by the Democrats, the lawmaking apparatus is sharply split along partisan lines, Schamotta notes. “This means that the untrammeled passage of an alternative policy package is even more unlikely,” he adds. “Instead, elected officials will try to score points throughout the process, potentially causing the negotiations to drag on much longer than markets currently expect.” 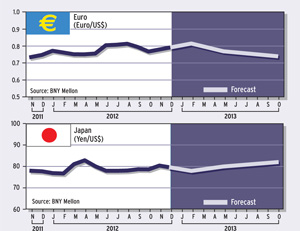 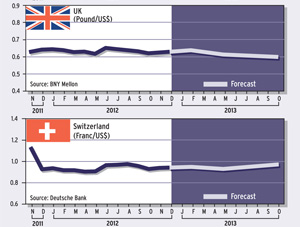 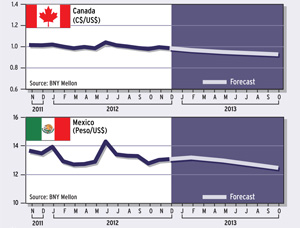 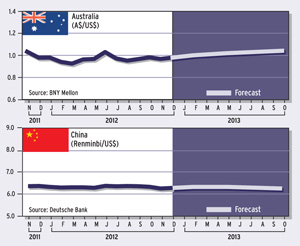 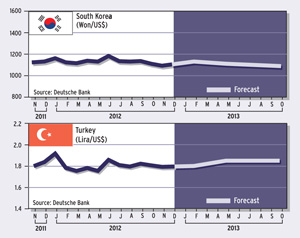