Mobile telecom service providers are making a mad dash for broadband spectrum by acquiring competitors, in a modern-day version of the Oklahoma land rush of 1889.

T-Mobile USA, owned by Deutsche Telekom, announced in October it would acquire MetroPCS, the fifth-largest mobile carrier in the US, in a reverse merger valued at $24.2 billion. T-Mobile needs more broadband spectrum to accommodate advanced data services on its new 4G network.

Meanwhile, Japan’s third-largest mobile carrier, Softbank, acquired a 70% stake in Sprint Nextel. The acquisition, valued at $23.3 billion, is Japan’s largest outbound investment ever and includes an $8 billion capital infusion. The deal will enable Sprint Nextel to upgrade its network and acquire smaller rivals.

In announcing the deal, Softbank CEO Masayoshi Son said: “When you go into battle, you need a war chest, you buy rifles, ammunition and pay your soldiers. In that way, we’re providing the war funds.”

Sprint Nextel, which is based in Kansas, has since agreed to purchase United States Cellular’s businesses in Midwestern US markets for $480 million in cash and the assumption of some liabilities. The spectrum deal will increase Sprint’s coverage in Chicago and St. Louis. Sprint also increased its stake in wireless broadband company Clearwire, to 50.8% from 48%, by acquiring a stake held by Eagle River Holdings.

In Japan, Softbank agreed to buy a smaller rival, eAccess, for about $2.3 billion in stock. Softbank, which introduced Apple’s iPhone in Japan, paid a large premium for eAccess to increase its broadband capacity. The deal will make Softbank the second-biggest high-speed network operator in Japan behind NTT DoCoMo.

“I never liked third place,” Son said. “We fought for number two, and someday we will be number one. It’s all about who can expand the network fastest.”

AT&T, which was blocked by US antitrust authorities earlier this year from acquiring T-Mobile USA, has committed $14 billion to expand its networks and expects to cover more than 300 million customers with its LTE (long-term evolution) high-speed network by 2014. Dallas-based AT&T is the country’s largest fixed-line operator and its second-largest wireless carrier after Verizon Wireless. LTE is rapidly becoming the global mobile-phone standard.

The competitive response to consumer demand for ubiquitous access to data via mobile phone, tablet and other network-connected devices and an enterprise-level shift to Cloud technologies have created a fertile market for mergers and acquisitions by technology companies, according to PwC US.

“Strategically, we view Lucasfilm as a good fit for Disney, given its successful track record integrating storied film franchises (Marvel, Pixar) and driving revenue synergies across multiple platforms, including [theme] parks, consumer products, gaming and other product lines,” Danish Agboatwala and Parth Shah, analysts at Barclays Capital in New York, said in a note to clients.

Divestitures remain a key driver of entertainment, media and communications deals, as companies evaluate strategic changes in their portfolios as the industry continues to evolve, PwC says.

While deal activity likely will be hampered in the future by low economic confidence, there are several factors that could spark a turnaround, according to Ernst & Young. There is continued strength in Cloud computing, private equity firms have unused funds to invest, and mobile device makers are looking for a lever to success. 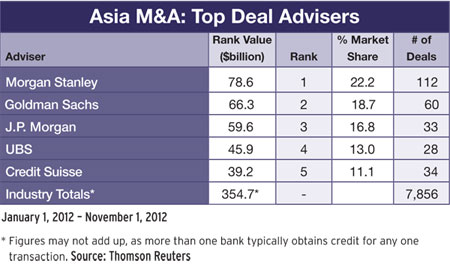