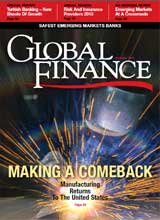 It might seem unusual that in an issue focused on emerging markets, our cover story this month is dedicated to the return of manufacturing to the United States.

We see this paradox as a tip-off that a "new geography" is in effect. We're not talking about a redrawing of the global map or a rechristening of developed and developing countries. We're talking about a new definition of the emerging markets and their characteristics that confutes many old and accepted axioms; for example, the idea that the cost of labor is cheaper in developing countries, or that governance is more advanced and regulations are more enforced in developed countries.

It is part of the new geography that the US is competitive again in manufacturing due to many internal and external factors. Donald Rissmiller of Strategas, an institutional brokerage firm, recently stated that “the current push for US energy independence and repatriated manufacturing is more likely a tech reindustrialization, rather than a manufacturing employment recovery.” Nevertheless, the trend is unexpected and intriguing. It is too early to describe it as a real reversal of decades of outsourcing and offshoring, but these trends are certainly relevant.

It is also part of the new geography that the top-ranked countries in the annual report on the ease of doing business, which is compiled by the World Bank, are Singapore and Hong Kong, followed by New Zealand, the United States and Denmark. They are followed in the top 10 by Malaysia, South Korea, Georgia and then by Norway and the United Kingdom—a mix of developed and developing countries. And in the top 20, Taiwan, Lithuania, Thailand, Croatia and Mauritius rank higher than Germany.

The report, which is in its 11th edition, compares business regulations for domestic firms in 189 world economies and acts as a benchmark for many countries that want to improve their practices and regulations in issues like “starting a business,” “getting credit,” “protecting investors,” and so on. Many of its results are surprising, like the fact that Rwanda, Georgia, Belarus and Ukraine have implemented the most reforms in the world since 2005 when it comes to the ease of doing business.