The outlook for the euro has worsened, following a slowdown in inflation in the eurozone to the lowest level in nearly four years. The European Central Bank cut its benchmark rate to a record low of 0.25% on November 7 to keep the eurozone economy from slipping back into recession.

The main influence on how the euro trades against the dollar will be the Federal Reserve’s decision about when to begin trimming its bond purchases, says Darryl Hood, FX options specialist at Cambridge Mercantile Group in London. “The surprise decision by the Fed to continue buying bonds has maintained the increased liquidity in the market, helping to support the euro, as well as weakening the dollar,” Hood says.

NOT OUT OF THE WOODS YET 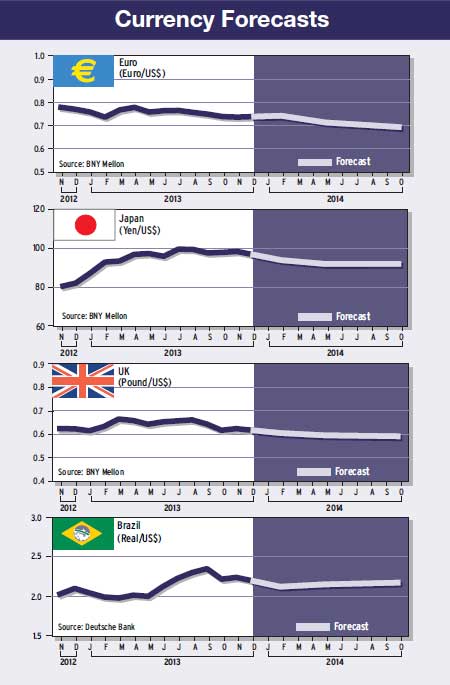 An unexpected end to the recession in the eurozone in the second quarter caught the markets unaware and buoyed the euro against all of its major peers, except the British pound, Hood says.

Meanwhile, the reelection of Angela Merkel and her party as the majority partner in Germany’s new coalition government will provide consistency, extinguishing previous talk of a possible breakup of the euro, Hood adds.

It is not clear that the eurozone is out of the woods, however, since industrial production and employment data remain weak, he says.

The US manufacturing sector remained strong in October, despite the government shutdown. The Institute for Supply Management’s Purchasing Managers Index rose to 56.4 from 56.2% in September.

“This continues the pickup in activity seen in the manufacturing sector since May, when the PMI was contracting somewhat at 49.0,” says Chad Moutray, chief economist at the National Association of Manufacturers. The big story in the report was the strength of sales, Moutray says. The index of new orders rose to 60.6, indicating an extremely healthy pace, he says.

The euro plunged from near two-year highs to a six-week low against the dollar in early November, after weak inflation figures stoked fears about demand in the 17-member economy, according to Nawaz Ali, UK market analyst at Western Union Business Solutions. Inflation in the eurozone slowed to 0.7% in October, the lowest since November 2009.

Recent SWIFT data show that Chinese renminbi customer payments, which are a good proxy for trade settlement, grew by 163% in Europe over the past 12 months, much higher than the 109% increase in Asia (excluding China and Hong Kong) in the same period. Growth of renminbi payments in Europe was particularly strong in the third quarter of this year, bringing Europe almost on a par with Asia.

“Our business intelligence indicates that China’s major trade partners in Europe are now embracing the renminbi for trade settlement,” says Patrick de Courcy, deputy chief executive and head of markets and initiatives for the Asia Pacific region at SWIFT. Recent moves by the Monetary Authority of Singapore to strengthen cooperation with China could help to increase adoption of offshore renminbi by financial institutions, de Courcy says.