Oil may be the liquid that drives many of the economies in the Middle East, but the spread of the Internet has unleashed a new generation of tech-entrepreneurs and start-ups, fueling hopes of a non-oil economy for the future.

Oil remains the driving force for the relatively fast-growing economies of the Middle East. Public expenditure on major projects in the Arab Gulf countries remains high, particularly in the United Arab Emirates, Saudi Arabia and Qatar. The countries affected by the Arab Spring uprisings continue to struggle, but support from the Gulf Cooperation Council (GCC) countries is keeping them afloat. Unemployment remains persistently high in the region, especially among young people and women, although a boom in technology start-ups offers some reasonfor optimism.

The International Monetary Fund expects real GDP of the GCC countries to rise by 4.4% in 2014, up from an estimated 3.7% in 2013, according to IMF deputy managing director Nemat Shafik, who met with GCC finance ministers in Riyadh in October.

Saudi Arabia, the biggest economy in the region, is the “swing” oil producer in OPEC, increasing production when necessary to offset supply disruptions and cutting back when oil prices are weak. The key development in the oil market at the moment is the slump in Libyan production from around 1.4 million barrels per day in July to less than 250,000 barrels a day in September, as a result of protests and sit-ins, according to a report by economists at Samba Financial Group. Political stresses and attacks on oil infrastructure are also affecting production in Iraq, the report adds. Thus, Saudi oil revenues are strong, as production is elevated and prices are firm.

In neighboring United Arab Emirates, perceived as a safe haven in the region, economic growth is picking up and fiscal balances are improving, according to Samba. The IMF, however, is concerned that there could be a new cycle of exuberant risk-taking. Government-related entities in Dubai have large debt maturities, including restructured debt, coming due in the years ahead.

Qatar’s project market is gaining momentum, thanks to the government’s national development strategy, as well as infrastructure investment associated with hosting the FIFA World Cup in 2022, according to analysts at National Bank of Kuwait. Qatar’s government announced another expansionary budget for fiscal 2014, with capital spending forecasted to increase by 17% from a year earlier.

While the Arab Gulf enjoys a construction boom, the Egyptian economy is stuck in recession. Egypt remains a weak spot in the Middle East, and operating conditions have continued to deteriorate, says Oliver Kolodseike, economist at Markit in London.

But technology start-ups offer hope of self-employment for young people, who make up the majority of the Middle East’s population. Arabic is the fastest-growing language on the Internet. Not only have the Internet and social media connected the people of the region, but they have also unleashed a wave of entrepreneurial talent that is striving to create a new, non-oil economy from the bottom up. 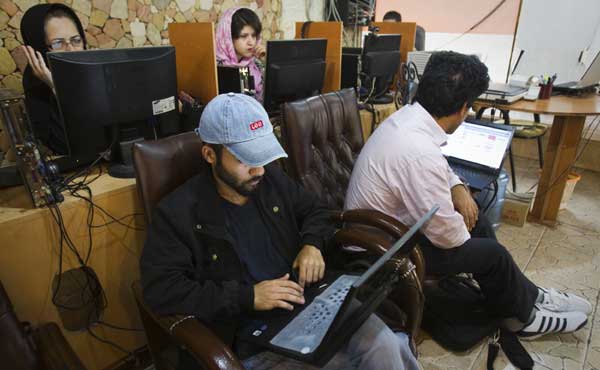 Wael Fakharany, Google’s regional manager for Egypt and North Africa, told the recent C3 Summit in New York, which aims to build relationships between the United States and the Arab world: “For Generation C [the constantly connected generation born after 1990] knowledge is like oxygen.” By harnessing the powers of the Internet to bring about gargantuan economic, social and political changes, young people have a podium from which their voices can be heard far and wide, says Fakharany.

The swift rise and power of the Internet is both a momentous opportunity and a simultaneous challenge for many governments in the region, Fakharany says. On the one hand, it has provided an excellent medium by which to further increase government services and employ the Internet economy to increase exports. On the other hand, it has also proved to be both a cultural and political challenge, as it allows individuals to mobilize, express themselves freely and reach a mass audience.

YouTube is the favored website in Saudi Arabia, attracting up to 90 million views daily by Saudis, who also provide much of the online Arabic content on the Internet. As part of its plan to create a knowledge-based economy, Saudi Arabia is sending 130,000 students a year to study abroad, with nearly half of them attending universities in the United States. The Saudi government is also funding business incubators to encourage technology start-ups.

A REVOLUTION OF A DIFFERENT KIND

In his new book, Startup Rising, Christopher Schroeder, a US tech-based entrepreneur, says technology offers an unprecedented, irreversible level of transparency, connectivity and inexpensive access to capital and markets. “Why wouldn’t the Middle East be ripe to unleash a new era of tech-based entrepreneurship and innovation?” he asks.

Schroeder says Amman, Dubai, Beirut and Cairo are the start-up hotspots of the Middle East and North Africa (MENA) region. The Arab world has a population of more than 350 million people. “It’s a young market, with more than 100 million people below the age of 15 who love their connectivity and have rapidly adopted smart devices,” he says. “Their revolution was not merely about overthrowing long-standing dictatorships but challenging a generational premise and complacency of their parents that things could not change.”

Michael Corbin, US ambassador to the United Arab Emirates, the largest US export market in the Arab world, says small and medium-size enterprises (SMEs) are the basis for creating jobs—and ultimately stability—in the Middle East. “The US has an edge in technology and entrepreneurship that is enabling it to succeed in a region where social media and e-commerce are transforming the norms of doing business,” Corbin told the C3 Summit. “Intraregional supply chains are making it easier for countries in the Middle East to trade with each other.” According to Corbin, microfinance and mobile banking are potential technology growth areas in the MENA region. He cites the UAE as an economically liberal country that has provided a positive model for the area.

The Dubai School of Government teamed up with Bayt.com, the leading online recruiting website in the MENA region, to survey trends in Internet usage in the region. The Arab region has more than 125 million Internet users with a growth rate of close to 30% annually, the study found. In 2012 the UAE, Bahrain, Qatar and Kuwait achieved Internet penetration rates above 50%, well above the regional average of 28%.

Facebook is the most popular social network in the region, followed by Google+ and Twitter, according to the survey, which targeted the residents of the 22 member countries of the Arab League.