Corporate Finance : Europe Passes US In Value of Deals

Crédit Agricole’s $16.8 billion agreement to acquire Crédit Lyonnais pushed Europe over the top in December, according to data compiled by New York-based Thomson Financial. The big French bank merger gave Europe a 39% market share for worldwide M&A; in 2002, compared to 37% for the United States.The bank merger also propelled the financial industry to the lead as the most-active area for mergers last year, ahead of the energy-andpower industry.

The global total value of announced deals fell 28% last year to $1.2 trillion and was a far cry from the $3.4 trillion total of 2000, according to Thomson Financial. The US total of $458 billion last year was down 41% from 2001 and was the lowest total of announced deals since 1994. For the fourth straight year, the United States had a decline in the number of domestic takeover targets. Ironically, the United States was home to last year’s largest transaction,Pfizer’s $61.3 billion agreement last July to acquire Pharmacia.

Goldman Sachs easily won the competition for top deal adviser in both the global and US tables. The investment bank advised on six of the top 10 deals worldwide last year.

Citigroup can point to its work on the Crédit Lyonnais transaction for giving it a secondplace finish globally last year. Citigroup edged out Morgan Stanley, which finished third as deal adviser, according to Thomson Financial.

Crédit Agricole’s acquisition of Crédit Lyonnais created one of the largest banks in the eurozone, rivaling BNP Paribas. Last December Crédit Agricole replaced its chairman, Marc Bue, after BNP Paribas outbid Agricole for a 10.9% stake in Lyonnais at a government auction. Agricole’s aggressive new chairman, Rene Carron,wasted no time in getting Lyonnais to agree to a recommended tender offer. 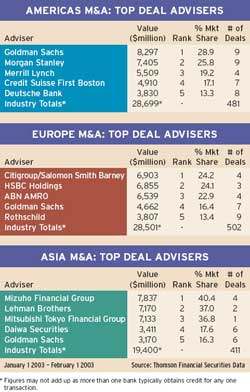 London-based Cadbury Schweppes says it will become the number one global confectioner following its purchase of Adams, a chewing gum and cough drop manufacturer, from Pfizer, the New York-based pharmaceutical group.