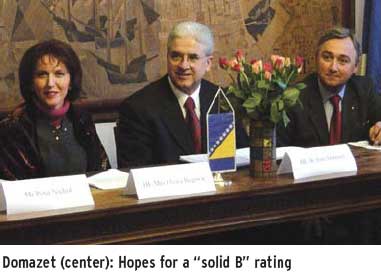 The European Union Police Mission that moved into Bosnia and Herzegovina this January was joined by other new visitors to the war-battered former Yugoslav state: analysts prepared to measure the creditworthiness of what is, on paper, the poorest country in Europe. Anto Domazet, Bosnia and Herzegovina’s minister of treasury, and Peter Nicholl, the New Zealander who is governor of the central bank, signed an agreement in London in January commissioning ratings agency Standard & Poor’s to assign a sovereign rating.The rating itself should be made and published by May.

“There aren’t any intentions to issue debt in the near future,” says Nicholl, “but we believe the rating is necessary to attract private foreign investment.Many people have not realized how much progress has been made in the economy.”

Bosnia has successfully negotiated standby arrangements with creditors, brought inflation down to less than 2% and held its five-year-old currency, the convertible mark, stable.The economy is expected to grow at 5% to 6%, and the banking sector is, Nicholl says,“close to being normal.”

On the downside Bosnia and Herzegovina’s budget deficit stands at 20% of GDP, and unemployment is, allowing for the gray economy, at least 22%. Significant reform is still needed, including tax harmonization between the Federation and the Republika Srpska.

Foreign direct investment is growing—it doubled to 250 million marks ($135 million) last year—but apart from a Coca-Cola bottling operation and a Volkswagen assembly plant, blue-chip names are thin on the ground. The Bosnian treasury says it is hoping for a “solid- B” rating.