Some Wall Street executives retire to play golf and spend more time with their families. Barton Biggs, 70, Morgan Stanley’s chief global strategist, is “retiring” later this year after 30 years with the investment bank to lead a new firm,Traxis Partners.Traxis will manage a hedge fund portfolio for Morgan Stanley. Biggs also will serve as a consultant to Morgan Stanley. Biggs ran the investment bank’s tactical assetallocation business, with some $10 billion under management. Traxis Partners will be formed by Biggs, along with Cyril Moulle-Berteaux, 33, a managing director of Morgan Stanley Investment Management, and Madhav Dhar, 41. Dhar, a 15-year veteran of Morgan Stanley, left in 1999 after being in charge of its emerging markets investments.The new hedge fund is expected to invest in stocks, bonds and currencies worldwide.

The world has long been Biggs’s oyster. One of the leading experts in emerging markets, Biggs got his first real exposure to the business in the mid-1980s, when the International Finance Corporation asked Morgan Stanley to set up the first country funds.The firm launched funds under the IFC’s auspices for Thailand, Malaysia and Turkey, among other countries. Biggs a value-oriented investor, joined the bank in 1973 as a managing director and general partner.He was the firm’s first research director. “Morgan Stanley has been my investment home for three decades, and there has been no better crow’s nest from which to view the world,” he says.

A long-term bear, he seems to have mellowed in recent years.“I maintain that because everyone knows all the risks, they are pretty much discounted,” he wrote in a commentary in early 2003. “The biggest risk may be in not taking a risk.” 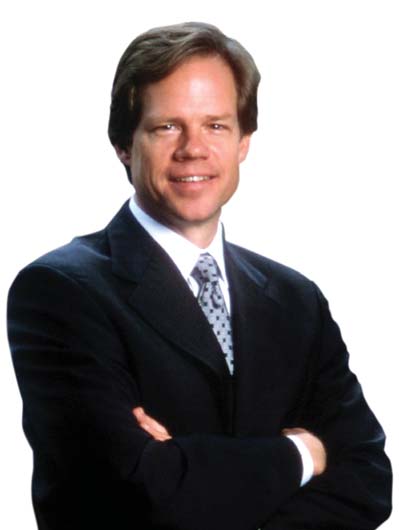 Less the comeback kid, more the guy who never went away, Barclay Knapp has now got a whole new task on his hands.The man who spent more than $11 billion in building NTL into a symbol of cable industry hubris now has just $500 million in the bank to make a go of the new company.

In January the southern England-based company emerged from an eightmonth- long Chapter 11 process that swapped some $10.9 billion of debt for shares, handing the keys of the company to bondholders. Almost alone among NTL senior manage - m e n t , K n a p p kept his job through and out the other side of the bankruptcy proceeding.

The new owners will be watching closely how Knapp performs in his newly straitened circumstances, and the 46-year-old Nebraskan will certainly have his work cut out. Industry analysts doubt that NTL has a future as a standalone company. Its aim is squarely on converting customers into “triple-users”— taking their phone, Internet and cable services from the same provider.

Knapp faces some formidable opponents in this new stage of the game, While NTL has been working through its debt problems, BskyB has firmed its market leadership in the UK cable market, while BT has rolled out harder-tobeat telephone packages.

But the toughest foe of all may prove to be Knapp’s own legacy. NTL snapped up as many as 20 companies while Knapp had the pocketbook jammed open. Failure to integrate those purchases contributed mightily to NTL’s lingering reputation for rock-bottom customer service.

Knapp used to relish running the company from Princeton, New Jersey; the line was, he needed to be close to the money to fund his deals. Now he’s in Chelsea, London. Call it an upscale way of living over the shop.