Improving global growth prospects and a sinking dollar are enticing US investors to ship more of their investment dollars abroad, with much of that money going into American depositary receipts, analysts say.

According to the latest data available from the US Treasury, purchases of foreign equities by US investors accelerated in the third quarter of 2003, reaching $403 billion, up from $330 billion in the second quarter of last year. It is highly likely that when the final numbers are in, 2003 will set a record for US investor net buying of foreign stock. Evidence of the broadening of the global growth story likely implies continuing gains in US investment abroad, say analysts at the JPMorgan ADR group in New York.

In a report on the movement of US equity capital abroad, they note that purchases were sharply higher in Asia last year, centered in Japan and Taiwan, which were buoyed by improved business and economic performance and strong local stock markets.

A surge of capital raising by Taiwan-based companies, led by offerings by Chungwa Telecom and Taiwan Semiconductor Manufacturing, sparked interest in the country’s shares, according to JPMorgan. Meanwhile, US investor purchases of Latin American shares were basically flat from the second to the third quarter of 2003, despite an improving economic outlook in the region. 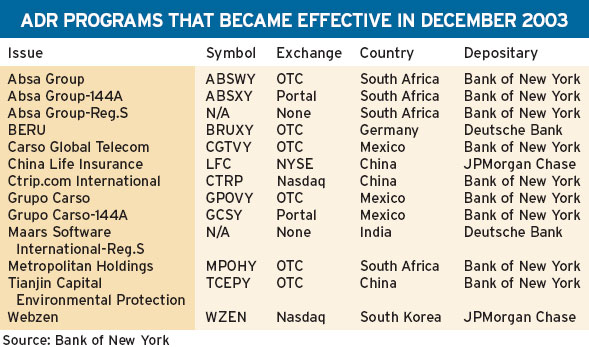 Severstal sells its products both domestically and in major export markets.

The British company develops, publishes and distributes accounting and payroll software for personal computer systems. Through its subsidiaries, it also maintains a registered-user database, which provides a market for related products and services, such as computer forms, software- support contracts, program upgrades and customer training.

Each ADR is equivalent to four of the company’s ordinary shares.

China Life Insurance launched an ADR program in conjunction with its $3.0 billion initial public offering in December 2003, of which $591 million was raised in ADR form, JPMorgan Chase announced as depositary.

Beijing-based China Life is the largest life insurer in China and one of the country’s largest asset managers and institutional investors. The ADRs trade on the New York Stock Exchange.

Each ADR represents 40 of the company’s Class H shares, which trade on the Hong Kong Stock Exchange.

Shanghai-based Ctrip is incorporated in the Cayman Islands. The company sells hotel reservations and airline tickets to businesses and individuals in China. Each ADR is equivalent to two of the company’s ordinary shares. Bank of

New York is the depositary.

Seoul-based Webzen, a producer and distributor of online games in South Korea and China, launched an ADR program on Nasdaq.

The company made an initial offering of ADRs valued at $97.2 million. Ten ADRs are equivalent to one Webzen common share. JPMorgan Chase is the depositary.

Webzen is trying to expand its business into the US and Europe by offering its three-dimensional online game called “MU,” which is popular in Asia.

Maars offers a suite of products for implementing enterprise resource planning, or ERP. It also consults with businesses and provides project-management services and ebusiness integration.

One GDR is equivalent to 10 ordinary shares, which trade on the Stock Exchange, Mumbai.