Following a few years of depressed activity, the asset finance market is poised for recovery in 2004. How strong that recovery is, though, depends on Washington. 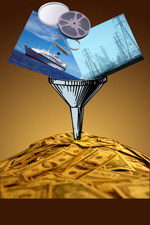 “The past couple of years have not been good for the industry,” says John C. Deane, managing principal at The Alta Group, a US-based consulting and advisory firm to the equipment leasing and financing industry. “Worldwide, businesses have not acquired equipment that needed financing as they did in better times,” he explains.


For those in the leasing industry, however, it seems like the good times are set to roll once more. According to Deane, the industry began to show signs of recovery in late 2003, and most observers believe this year will see further strengthening of the market. Deane credits a general economic improvement for the sector’s recovery, noting that the absolute growth of financing of high-tech equipment, for example, had declined as companies curbed investment during the economic slowdown. Others, he feels, were satisfied with the IT equipment they had already acquired and were therefore hesitant to make new purchases. “They just didn’t feel that they needed leading-edge equipment again,” he adds.


Ralph Petta, vice president of industry services at the Equipment Leasing Association of America, a US trade association, says a rise in capital expenditure is driving the rebound. “There is pent-up demand as businesses had deferred their acquisitions but are now loosening up,” he says, predicting 2004 will see an increase in transactions after a flat 2001-2002 and an only mildly improved 2003. “The lease financing marketplace lags business capital spending, so when spending increases, then leasing follows,” he notes.


Although conventional wisdom has it that leasing tends to thrive within a high-interest-rate environment, current low interest rates, Petta predicts, will not affect the sector’s rebound. “We’ve had low interest rates, but leasing has held its own,” he says, adding that interest rates affect only certain market segments. “There is leasing of everything from computers, telephones and copiers to aircraft, and there are things that are variable in each market,” he explains.

Market Faces Taxing Questions
But market participants say the US government may hold the key to how strongly the market actually recovers. “This year’s market growth will depend on the US resolving some of the tax matters that are pending,” says Charles Quattrochi, global head of Citigroup’s asset finance group. “If they are resolved, then we’ll have a great year and the market will grow. If not, we’ll see more business out of places like the UK, Germany, France and Switzerland. But the US is a major driver in the global market, and what happens here will have repercussions on the business as a whole.”


Among unresolved issues are the current administration’s calls for changes in US tax laws that seek to increase tax revenue by more than $40 billion over the next 10 years. At the heart of the plan is a proposed crackdown on what the administration feels are significant loopholes in leasing transactions, which alone would rake in an additional $34 billion in tax earnings if eliminated. Given that the leasehold tax rules have become a key issue in both the Republican and Democratic presidential election campaigns, they are unlikely to be resolved in the near future.


“We do not anticipate having clarity for a while,” says Evelyn Havasi, managing director within Citigroup’s asset finance group, noting that the US Treasury Department’s revenue-raising tax proposals for the fiscal year 2005 budget include an initiative to “stop abusive leasing transactions with tax-indifferent parties.” According to Havasi, it appears that the initiative is designed to build on leasing proposals advanced by the Senate finance committee chairman, the Republican Charles Grassley (see Milestones, page 6).


“There will be some clarity this year, but we won’t be able to predict volumes or structures that will get done until late into the first quarter as we await more information from Washington,” says Havasi. “Any market that may be on the cusp of legislative change may be faced with a set of facts that may impact the direction of future business. Like most people in the industry, we take change as an opportunity to develop,” she says.


“What we want to see is a level and flat playing field where people know what the boundaries are,” argues Quattrochi. “We need guidance from US tax authorities that says, Here are the rules you must play by. As long as we can have some certainty on regulations, then business will grow. It just seems that we have tax changes in the US every couple of years, and that hinders our business,” he says.

Popularity Persists Despite Potential Changes
Despite the potential upheaval triggered by taxation rule changes, asset finance products continue to be popular financing tools. Indeed, companies face several advantages in tapping the asset finance market, whose typical products include invoice finance, asset-based lending, leasing and hire purchases. According to an asset finance report by Andrew Hewitt of the Bank of England’s domestic finance division, the advantages of asset finance over traditional bank lending include the fact that it gives financiers better security since the financier is the legal owner of the assets financed rather than just holding a charge over them.


Hewitt says another advantage is that asset financiers often have a high level of specialist knowledge on the value of the assets involved and how best to realize that value. This specialist knowledge often means that an asset financier may be more willing to provide finance for a given sector than a traditional lender, who may lack the same degree of knowledge of the borrower and the assets used to secure the loan. Babcock & Brown, a US-based global asset finance firm, for example, operates aircraft and rail management divisions to service the airline and railroad sectors. Another unit specifically services the semiconductor and electronics equipment industry.


Proponents of the industry cite benefits including greater freedom and flexibility, compared with the stringent covenants and leverage ratios associated with bank loans; tenors of 15 to 20 years or longer versus an average of seven years on bank lines; shorter execution time in certain markets; the ability to secure 100% financing of the asset value, as opposed to bank loans that are generally around 80%; and the fact that companies don’t have to tap out general liquidity. Furthermore, asset finance opens up alternative sources of capital.


Yet Hewitt also mentions several disadvantages, including the fact that asset finance is not available in all sectors and that it can be expensive when compared with traditional bank loans. Havasi counters that the cost issue is a relative one and is just one part of the equation. “There’s a fee in a structured transaction and not just a credit spread or margin as in a bank loan,” he says. “If you look at it in a vacuum, then it’s more expensive. However, the effects of globalization and the need for multinationals to more efficiently arrange asset financings to maximize shareholder returns may change the way in which asset owners evaluate transactions. Leasing techniques in a number of markets, together with securitizations, will clearly be a benefit to our corporate clients as new investment in plant and machinery is made through this upswing in the business cycle.”


Another potential drawback is the scope for fraud by financiers’ clients in invoice discounting. This can include the swapping of fictitious invoices or issuing invoices before goods have been dispatched. The issue is a particularly pressing one in the UK, where invoice finance grew by 300% in real terms from 1993 to 2002.


Mark Adelson, head of structured finance research at Nomura Securities International, says the potential for fraud has been particularly damaging to the healthcare-receivables sector, where investors have already been stung. Adelson recalls last year’s scandal involving US-based National Century Financial Enterprises (NCFE), in which investors were defrauded out of some $3.3 billion, of which he feels they are not likely to recover more than 15% to 20%.


Although all details are not yet known, the scheme basically involved NCFE’s issuance of securities supposedly backed by healthcare receivables that were allegedly found to be fake or ineligible. “It’s a terrible blow to the prospect of bringing securitization technology to bear in the healthcare area,” says Adelson.


“Fraud is a real issue,” says a Nomura research report. “It is most prominent in deals backed by revolving pools, where the issuer is facing financial distress. Such deals need tough third-party oversight to make sure that collateral is real. The industry needs a new kind of player to fill the role of ‘deal cop’. An ideal deal cop would have broad powers; just short of the right to pistol-whip an issuer’s CFO to get information.”


Companies that took advantage of recent lean years to implement changes may be best positioned to benefit from this year’s upswing. “While survival during the recent down cycle depended on operational efficiency in the form of reduced operating costs, success in the upswing depends on the ability to rapidly adapt to changing markets and customer needs,” says a 2003 survey of market participants by the US-based Equipment Leasing and Finance Foundation. “Best-practice players have taken time to streamline their processes, re-examine and, if necessary, re-price their portfolio, and adjust their strategic focus to best take advantage of future opportunities.”


Glossary of Asset Finance Products
Asset-based lending. Finance for the acquisition of assets (e.g., raw materials, unsold stock, plant, machinery). For stock finance, the financier may provide a revolving facility secured on the pool of assets. For fixed and intangible assets, financing is similar to a secured term loan.


Hire purchase. Rental agreement allowing the hirer to purchase the asset at the end of the rental period. If payment is nominal, capital allowances—which accrue to the asset’s buyer—will accrue to the hirer, who purchases the asset by taking the option to buy it at far below market price.


Invoice finance. Invoice discounting and factoring involve assignment by a vendor to its financier of proceeds due on outstanding invoices, in return for immediate payment of a percentage of the invoices’ face value and the remainder (less fees and finance charges) upon payment of the debts by the vendor’s customers.


Leasing. Contract between lessor and lessee giving the lessee possession and use of an asset for a specific period in return for rental payments to the lessor. The lessor retains ownership for the duration of the lease, and the lessee usually does not have the right to purchase the asset.