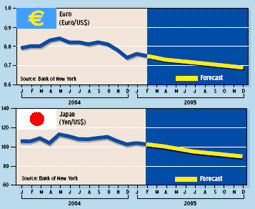 The dollar’s rally in early January reflected optimism about the United States economy and the prospect for higher interest rates, as well as year-end repositioning in the greenback by market participants, analysts say.

"We believe that this dollar correction is long overdue and that it will extend into a major retracement," says Carl Weinberg, chief economist at High Frequency Economics, based in Valhalla, New York. "We think the dollar can and will appreciate, especially with every expectation that the Federal Reserve will raise rates energetically all year long," he adds. The driving factor behind the dollar’s correction has been and will continue to be the increases in US interest rates relative to rates elsewhere in the world, according to Weinberg.

US Treasury secretary John Snow contributed to the dollar’s rise, telling a television interviewer: "We [in the Bush administration] want to do things to sustain the strength of the dollar. Among them is going to Congress to bring the deficit down, to see that we restrain spending so that the deficit will be cut over the course of the next few years—cut in half."

Comments such as this don’t mean that the US is taking the view that the dollar has declined far enough and that it should stabilize or even rise, says David Gilmore, economist and partner at Foreign Exchange Analytics, based in Essex, Connecticut. 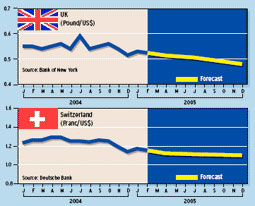 While credible deficit reduction would lead to a higher dollar, the strength in the dollar would only be a by-product and not the aim of US policy, Gilmore says. "I firmly believe that higher bond yields are a far graver concern for this administration than a falling dollar," Gilmore says. "Assuring foreign investors that the administration is dedicated to trimming the deficit is aimed at securing adequate foreign capital inflow."

The Bush administration is explicitly seeking a weaker dollar against the Chinese yuan and other Asian currencies, Gilmore says. By saying that it is committed to deficit reduction, the administration has linked the future value of the dollar to progress on this front, he asserts. 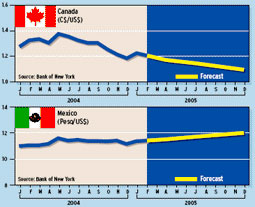 The Fed’s warning in the minutes of the December Federal Open Market Committee meeting that it "will respond to changes in economic prospects as needed to fulfill its obligation to maintain price stability" was one spur to the dollar, Wolf says.

Investors may realize that the dollar could regain some of its attractiveness with higher interest rates, Wolf notes. "And let’s face it, although the dollar is facing some tough hurdles, it will still remain the world’s currency for the foreseeable future," he adds. "The euro will gain more importance, but its strength will have to be backed up with fundamentals." After rising about 25% against the dollar in 2003 and 2004 combined, the euro is attracting the attention of reserve managers at central banks around the world. 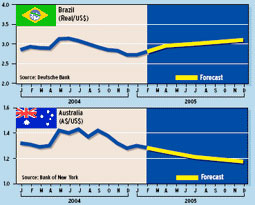 However, analysts say the euro is not about to replace the dollar as the world’s main reserve currency.

"China and Russia are not selling US assets, but they are putting more new money into the euro," says Meg Browne, senior currency strategist at Brown Brothers Harriman in New York. The net effect of this subtle shift is unlikely to be major, Browne says. The dollar likely will continue to weaken in 2005, but rising US interest rates will offset some of the move, she adds.

The dollar’s "new year" rally mimicked a similar move in January 2004 and may have been related to year-end positioning, analysts say. They note that last year’s rally came to an abrupt end as repositioning came to a halt.

The deterioration of the structural imbalances in the US economy, combined with the US Treasury’s policy of benign neglect for the dollar, as well as the deepening quagmire in Iraq and the resulting erosion in the budget, have all maintained negative currents against the dollar, says Ashraf Laidi, chief currency analyst at MG Financial Group in New York. 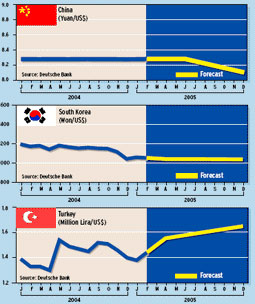 The US trade deficit continued hitting record highs in 2004, accounting for an unprecedented 5.7% of gross domestic product, Laidi says.

"Short of a slump in US demand that would only be brought about by a recession, imports show no sign of retreating any time soon, thus maintaining the negative status quo on the trade gap," Laidi asserts.

Meanwhile, China’s central bank is likely to make another rate increase in the current quarter, which would pressure commodities and boost the dollar temporarily, Laidi continues.

"But the positive dollar impact from any Chinese tightening will eventually run its course, as that would pave the way for an eventual rebalancing of the yuan into a basket of currencies, including the euro," Laidi says.