February 01, 2005
Author: Chris Brown
As many people die from preventable causes every week in Africa as died in the recent tsunami. Now, however, Southern Africa’s struggling nations have reason to hope. 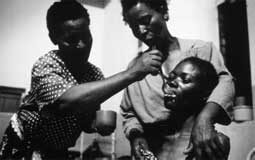 As 2005 begins to unfold, investors and corporates around the world have plenty of reasons to be optimistic. Despite some serious setbacks through the year, 2004 turned out well. By mid-December all the main US equities indexes were comfortably in positive territory, and investors were looking forward to more of the same from 2005. Markets around the world had largely stabilized, and many of the bigger emerging markets were posting strong gains, confounding skeptics who feared a hard landing in China, economic turbulence in Brazil and dire fallout from the Indian elections that saw the demise of a reform-friendly administration.

As the true extent of the devastation wrought by the recent Indian Ocean tsunami became clear, what began as an outpouring of concern quickly became a rush of promised financial aid. The swiftness and scale of the generosity shown by governments and individuals around the world was unprecedented and, quite simply, staggering. But even as the first food drops were landing, fears were emerging that financial aid might turn out to be a finite commodity at a global level. As the aid moved to the region devastated by the tsunami, other equally needy areas could be left without much-needed assistance.

In greatest danger is Africa, where, according to World Health Organization estimates, as many as 20,000 people die every day from preventable diseases or poverty-related causes. In any single week, that adds up to almost 150,000 people-roughly the same number as were killed by the tsunami. If financial aid does turn out to be finite, the near-$5 billion promised following the tsunami will have a devastating effect on Africa, which receives around $20 billion a year in aid-and needs far more than that, according to most observers.

The United Nations has already sounded an early warning about the danger of major donor countries forgetting the African crisis as they focus their attention on helping the victims of the tsunami. British Prime Minister Tony Blair and the finance minister, Gordon Brown, have also both said the tsunami must not be allowed to divert aid and attention from sub-Saharan Africa. In a speech about development in Africa, Brown said, “I want a world that does not have to choose between emergency disaster relief and addressing the underlying causes of poverty and injustice.” Blair, who commented that there is the equivalent of a “man-made preventable tsunami every week in Africa,” has made helping Africa escape from poverty one of his main themes during the UK’s presidency of the G8 this year.

The key question is whether these initiatives can successfully bring the international community’s focus onto Africa’s problems once the memories of the tsunami begin to fade. James Shikwati, director of the Inter Region Economic Network in Kenya and coordinator of the Africa Resource Bank, believes the tsunami might eventually have a positive impact on Africa: “The increased focus on tsunami victims by well wishers from the developed countries may benefit Africa in two areas. First, private citizen initiatives to assist the poor will become more pronounced,” he says. “We are likely to see a direct linkage emerging between citizens in wealthy countries and those in poor countries in Africa. It is also going to increase demand for aid to African countries, which in turn will put pressure on African governments to streamline their governance,” Shikwati adds.

In a recent interview, the Prime Minister of Ethiopia, Meles Zenawi, expressed his hope that Africa might not suffer, and might even benefit in the long term, from the outpouring of sympathy following the tsunami. “I do not believe that the positive response to the tsunami disaster in Asia necessarily means there is less aid for Africa. It depends on the circumstances,” he said. “If people recognize that we have daily disasters of that type that are nothing to do with man-made disasters and that they need to respond adequately in the manner that they have done in Asia…we can capitalize on the positive outpouring of support and understanding for the sake of Africa.”