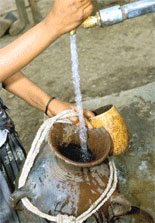 Romilly Greenhill of UK-based charity ActionAid believes the increased focus on aid and development that has been triggered by the tsunami will ultimately benefit Africa. “It needs the media and campaigners to keep up the pressure and the politicians to continue making the link with the tsunami,” she says. “If that happens, the impact will be positive.”

Many are skeptical, believing Africa will inevitably be the victim of discrimination. Some people in Africa have complained that even those African nations affected by the tsunami, such as Somalia, where hundreds died, are receiving less assistance than countries in Asia that suffered similar losses. That Somalia is not receiving what many see as its fair share of aid is not necessarily because donors are ignoring it, however. Without an effective government for the past 14 years, Somalia is an anarchic and dangerous place. Attempting to deliver aid to the affected coastal region is hazardous and potentially ineffectual.

The dearth of aid arriving in Somalia highlights some of the problems that afflict much of the continent. But it is Southern Africa that is in most need of assistance and that is most vulnerable to a potential decline in aid. The Southern African region has debt of well over $690 billion, and it is estimated that 70% of the region’s 300 million people are living in poverty. Such statistics make it very hard for the region to attract foreign investment, which is part of the reason why aid remains so crucial to the region’s prospects for development. According to a recent study by the United Nations, global foreign direct investment (FDI) has reached record levels after three years of decline. Sadly, just 3% of world FDI flows goes to Africa. Last year, the entire continent saw an influx of just $20 billion-an amount roughly equivalent to the money invested in Mexico alone during the same year.

With most of the countries in the region falling under the Highly Indebted Poor Countries classification of the International Monetary Fund (IMF), they have also been unable to access external funding. For example, Zambia recently failed to procure $1 billion from the fund after refusing to privatize its national commercial bank, electricity supply business and a telecommunications enterprise.