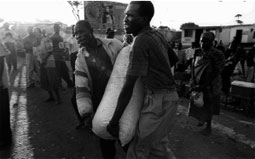 Aid is working in some countries, though, and these might serve as an inspiration. Uganda, for example, used aid to remove the charges on basic health services, prompting a massive increase in the use of medical services and a huge reduction in illness. In Tanzania aid was used to fund education, and in Mozambique it was used to fund rehabilitation after the civil war and floods there. “There is an issue with sustainability, though,” says Greenhill. “If aid is funding half a country’s budget, for instance, that country needs to be confident the aid will continue to arrive.”

It is also abundantly clear that aid alone will not provide the answer. Developed markets will have to take a different attitude toward trade with African nations if any progress is to be sustained. The country director in Zambia for the International Labour Organization (ILO), Louis Ndaba-Hagamye, says developing nations find it extremely difficult to export products to the international markets, and, when they do, the developing countries have no control in determining their prices. The only way to promote “equity and fairness,” Ndaba-Hagamye claims, is to bring down trade barriers that prevent African countries competing in world markets.

Ethiopia’s Prime Minister Zenawi agrees: “Providing non-reciprocal access to developed country markets is, if anything, the most important thing that the developed countries can do to promote Africa’s development.”

Bringing down trade barriers is one of the core themes that the UK will be pressing during its year at the head of the G8. Analysts rate the chances of success, though, as fairly slim. Britain may have more luck encouraging creditor nations to pare the region’s debt burden. Given the Paris Club’s recent eagerness to offer a repayment moratorium to the countries worst affected by the tsunami, creditor nations will find it hard to brush off requests to help debt-laden African nations.