February 01, 2005
Author: Paula L. Green
Stronger equity valuations fail to float many US pension plans that had found themselves under water. 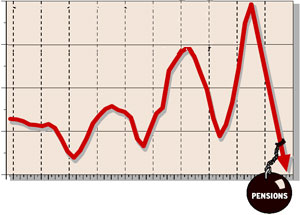 Corporate pension plans will no doubt be handing their chief financial officers some sleepless nights this year as the financially troubled plans start to create a drag on overall corporate health.

Despite the healthy single- and even double-digit returns registered in most equity markets around the world last year, many corporate pension plans remain mired in financial problems. And as legislation changes make pensions more of a core corporate concern, financially troubled plans are starting to create a drag on overall corporate health.

Experts say that the stronger equity values found in pension plan portfolios can’t counter a variety of other factors that are increasing plan liabilities-factors such as the greater disclosure requirements brought about by US legislation like the Sarbanes-Oxley Act of 2002, more stringent accounting practices and an increasing number of plan retirees who are living longer. And the managers of these traditional defined benefit plans were even left on the sidelines by last year’s upward movement of interest rates in the United States. That’s because the rates on the long-term corporate bonds in which they usually invest actually decreased over the past year.

All of these factors-plus the poor equity returns registered in plan assets for several years after the stock market declines of 2000-have combined to widen the gap between pension assets and liabilities in many cases. "If the plan is already in deficit, even if there is an increase in the value of the assets, the gap between assets and liability can widen," says Giles Archibald, head of international consulting in the US for Mercer Human Resource Consulting in New York City. "Some companies are making significant contributions to their plans," he notes.

In a study released in September 2004, Credit Suisse First Boston estimated that 340 corporations in the Standard & Poor’s 500 Index would have underfunded plans at the end of 2004, up from 320 S&P; companies in 2003. Before the strong fourth-quarter performance of US equity markets, Credit Suisse had estimated the 340 plans would be underfunded by a total of $254 billion. But with the surge in equity prices, CSFB estimates that the plans will now be underfunded by only a little more than the $172 billion underfunded total for 2003. 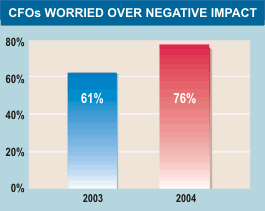 "The plans have faced the worst possible scenario. The low returns of the stock market drove down their assets, and the low interest rates drove up their obligations," says David Zion, an accounting analyst at Credit Suisse First Boston in New York City.

The chronic pain now being experienced by managers of these traditional benefit plans is creeping into other financial areas. If a plan’s liabilities go up, that can have an impact on how investors value the company and can end up lowering its stock price. And that lower valuation can in turn reduce the assets of the pension plans of other corporations that have invested their pension assets in the first company’s equities.

The deteriorating condition of a company’s pension plan can also start to affect other areas of corporate health as profits decline, credit ratings drop, cash flow slows and new investment in equipment, building and employees may be curtailed.
Legislation Changes Landscape
Whether or not they can adjust their long-term reliance on volatile equity returns and interest rates, pension plan managers and their CFOs are now facing a new set of variables created by a pension reform proposal unveiled last month by the Bush administration.

The proposal is a sweeping revamp of a variety of regulations passed over the decades that now govern corporate pension plans in the US. The proposal would affect everything from the insurance premiums that companies pay to insure their plans, to the bond rates used to calculate plan liabilities, to the disclosure of information to plan participants.

"It’s a sea change. Most of us are still trying to figure out what all this means," says Judy Schub, managing director of public policy at the Association of Financial Professionals in Bethesda, Maryland. Schub was speaking in mid-January, a few days after the plan had been unveiled by US labor secretary Elaine Chao. "But it’s clearly going to be more stringent in many ways. It’s going to change the way liabilities are calculated," Schub adds.

One primary goal of the sweeping reforms is to tighten funding requirements for corporate pensions and avoid an expensive taxpayer-financed bailout of the US Pension Benefit Guaranty Corp. The federal pension insurance system reported a record deficit of $23.3 billion late last year, twice the amount of 2003. The agency has had to absorb the losses of failing pension plans in the steel, auto and, now more recently, the airline industries.

The proposal would penalize companies with troubled pension plans by making them pay higher insurance premiums and force them to act earlier to fund underfunded pension schemes. The administration has sent the proposed reforms to committees in the House of Representatives and Senate and asked them to turn the reforms into appropriate legislation.

One positive development for the corporate community in the past year was the passage of US legislation that let companies save billions of dollars annually when meeting the minimum funding obligations of their defined benefit plans.

Approved by President Bush in April, only days before corporations were set to make their first quarterly contributions for 2004, the legislation lets corporations use an interest rate based on a composite of long-term conservative bonds when calculating their pension liabilities. If the legislation wasn’t passed, corporations would have had to revert to a lower interest rate that is based on the defunct 30-year treasury bond. That rate, companies say, forces them to kick in more money than is truly necessary to keep their pension plans financially sound and meet the minimum funding requirements set by ERISA.

The legislation expires at the end of 2005. The financial community had been pushing for a bill that would extend the terms for three years or even make them permanent. "This doesn’t solve the problem about planning," says Schub. "We would have liked it to be permanent."

And the legislation doesn’t reduce the many variables of a pension landscape that encompasses volatile markets, an aging population that is living longer and shifting global accounting standards. All of these changes are guaranteed to produce more headaches in corporate boardrooms in the coming year.

"There’s tremendous volatility in these plans, on both the asset and liability side, that a CFO has to deal with," says Bradford Klinck, a senior vice president at AON Consulting, who works in Somerset, New Jersey. "If the assets have fallen, then he suddenly might have to make contributions that equal 10% to 20% of payroll. CFOs are dealing with a lot of variables."