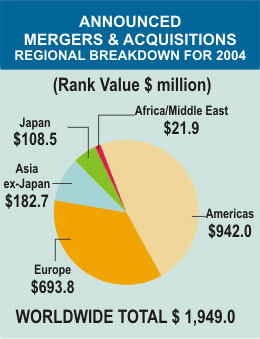 Telecom mergers on both sides of the Atlantic contributed to the biggest deal total on record for December, with more than $300 billion of global M&A; transactions announced in the final month of 2004, according to Thomson Financial. The strongest-ever year-end period for worldwide M&A; brought the total for 2004 to $1.95 trillion, a 40% increase from 2003. US deal volume rose 46% in 2004 to $833 billion.

Goldman Sachs continued as the leading financial adviser for announced worldwide M&A; transactions in 2004 for the seventh consecutive year. JPMorgan was second, and Citigroup was third. The biggest merger announced in December, with a rank value of $46.5 billion, was the proposed union of Sprint and Nextel Communications to create a new major wireless phone company in the US, to be known as Sprint Nextel.

Sprint already was third-largest wireless phone company in the US behind Verizon Wireless and Cingular Wireless. Last August, Cingular, which is a joint venture of BellSouth and SBC Communications, completed its $47.5 billion acquisition of AT&T; Wireless Services.

The biggest merger announced in Europe in December was Telecom Italia’s tender offer and stock-swap transaction to acquire the remaining 45% stake it did not already own in Telecom Italia Mobile. The $28.8 billion merger would simplify the group’s ownership structure and is a strategic response to the integration of fixed-line and mobile telephony platforms, according to the companies.

"There is growing customer demand for seamless use of services made possible by new technologies," they said. "Technological advances are not only breaking down the barriers between different networks, but are bringing about a convergence between telecom services and other sectors such as computers, media and consumer electronics."

The leading worldwide M&A; deal announced in 2004 was the $80.1 billion stock transaction between Royal Dutch Petroleum of the Netherlands and Shell Transport & Trading of the UK, according to Thomson Financial.

China witnessed its first-ever hostile bid battle in 2004, with Anheuser-Busch prevailing over SABMiller for control of Harbin Breweries.

Dealogic says hostile activity was seen last year in a number of countries with little history of unwelcome approaches, including Singapore, Greece and Austria.

In Japan, UFJ Holding is the target of a $29 billion bidding battle between Sumitomo Mitsui and Mitsubishi Tokyo Financial.