Cover Story : Deal Or No Deal

The seemingly interminable wrangling over global trade encapsulated in the so-called Doha Round of talks might be about to come to an end. 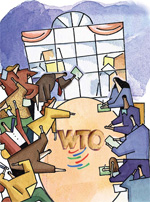 The dormant world trade talks may finally emerge from a prolonged suspension this spring as trade officials doggedly crisscross the planet in an attempt to iron out the controversial disputes that stalled the talks last year.

US president George W. Bush and European Commission president José Manuel Barroso gave the lagging Doha Development Round a much needed jolt early last month when they urged their top trade negotiators to move ahead with the negotiations.

At a press conference held in Washington, DC, after the two presidents met to discuss a wide range of issues, US trade representative Susan Schwab and Peter Mandelson, the European trade commissioner, said both the US and Europe were committed to a successful conclusion to the round that was formally suspended last July. Yet both trade officials cautioned that the highly complex talks, which have stalled primarily over agriculture, need to incorporate the interests of all members of the World Trade Organization.

“Everyone has a stake in its outcome, therefore everyone has a stake in the negotiation,” Mandelson said at the press conference. Schwab, who met in New York City with Brazilian foreign minister Celso Amorim the previous week and had imminent plans to sit down with Japanese trade minister Akira Amari and Japanese agriculture minister Toshikatsu Matsuoka, said a tremendous number of bilateral and small group meetings involving senior officials were being held below the radar screen. These sessions were meant to get a sense of trading partners’ views on priorities, sensitivities and areas of convergence on various issues “so, when it comes time to come out with the next round of activities, whether it’s sequential or all at once, whether it’s half a dozen countries or significantly more than that, there are no nasty surprises,” Schwab said. “I think that really is the key.”

Aware that the unofficial talks have been gathering steam since November, observers of the global trade arena are cautiously optimistic that this latest push by political leaders will lead to a resumption of the round that WTO director-general Pascal Lamy suspended in late July. “This has been the most encouraging news for some time. But we also saw this at the Group of Eight meeting in St Petersburg last summer,” says Timothy Deal, senior vice president in Washington for the US Council for International Business. He was referring to the gathering of world leaders in St Petersburg, Russia, last July and instructions to their respective trade ministers to wrap up the talks. “There’s been lots of false starts, and I hope this is not one of them,” he adds.

Deal says the key to unblocking the discussions center on agriculture, with the United States needing to move on its domestic farm supports, the European Union cutting its tariffs on agriculture products, and large emerging markets, such as Brazil and India, easing their stance on protecting their own agricultural markets by labeling every imported farm product as “sensitive.”

Richard Newfarmer, economic adviser in the trade department at the World Bank in Washington, says one option that has reportedly emerged during the recent months of global wrangling has been labeled the 20-20-20 deal. With this option, the EU would move closer to the Group of 20’s position by cutting its agricultural tariffs by 54% while the United States would bind its agricultural subsidies at the current annual level of $20 billion. Meanwhile, large emerging markets such as India and Brazil would cap their tariffs on manufactured goods at 20%. The G-20 is a bloc of developing nations created in 2003 at the fifth ministerial WTO conference in Cancun, Mexico.

Spreading the Burden
“All countries have to make a contribution if the round is to succeed, with the rich countries offering cuts in their tariffs and agricultural subsidies, the middle-income countries making more movement on manufacturing and services, and the low-income countries offering greater bindings and transparency in current tariffs,” says Newfarmer, who is the lead author of a recent World Bank report on globalization.
The other sensitive issue looming before negotiators is manufactured goods, as companies from the richer nations want greater access for their goods in the more advanced developing markets. “This is holding up the show,” says Christopher Wenk, director of international trade policy for the National Association of Manufacturers in Washington, referring to these countries’ refusal to reduce the upper limits, or so-called bound rates, on imports of manufactured goods. “Agriculture is important, but merchandise goods account for the majority of global trade by value,” he explains.
And behind these top two stumbling blocks lies the developed world’s push to have these same large emerging market nations ease their market access to foreign banks, insurers, telecommunications firms and other companies in the services sector.
“The crunch will come in this area…countries are hiding behind the lack of agreement on agriculture and manufacturing,” says Deal. The developed nations, for example, are pushing for more uniform rules and regulations rather than the “hodge-podge of restrictions” that can favor local financial institutions or foreign banks that opened offices in developing nations decades ago, he adds.

Gary Clyde Hufbauer, a senior fellow at the Peter G. Peterson Institute for International Economics in Washington, is not optimistic about progress on the services front. “These countries are very resistant to liberalizing their services. And there are local cartels running the services such as banks, telecommunications and insurance,” he adds.
Analysts are hoping that the annual World Economic Forum, set to be held as usual in Davos, Switzerland, in late January, would give a boost to the round as trade officials and high-level corporate executives twist some arms behind closed doors. More than 2,000 leaders from business, politics and academia were to gather at the annual meeting. This year’s theme, “the shifting power equation,” was meant to reflect current trends like the growing prominence of emerging economies and the increasing leverage of commodity suppliers. “What happens at Davos is anybody’s guess,” says Newfarmer.
Another wildcard surrounding the outcome of the talks is the newly elected US congress, now controlled by Democrats, and how the Bush administration will handle the upcoming expiration of its Trade Promotion Authority (TPA). Enacted as part of the 2002 Trade Act and previously known as “fast-track” authority, the TPA now prevents Congress from making major amendments to any multilateral trade pact that comes its way. The authority expires on June 30, and the Bush administration has yet to show its hand on this issue. “I think a simple extension of fast-track is not in the cards,” says Kimberly Ann Elliott, a senior fellow at the Peterson Institute for International Economics who also works at the Center for Global Development, an independent Washington think-tank focused on reducing global poverty.

Hufbauer says the Bush administration will have to ask Congress for fast-track authority by April to obtain a six-month extension that will move it beyond the June 30 expiration date and before the 2008 presidential race really heats up. Another option would be to seek an extension until the end of 2008, when the elections have passed. Analysts believe it would be easier for the Bush administration to seek an extension with a Doha proposal in hand—one factor probably influencing Bush’s recent push for a conclusion to the talks.

“Unless there’s a prospect of an outcome, why would Congress want to give a blank check? They’re giving away their rights,” says Deal, adding that the parameters of any new TPA will depend on the political climate when Congress actually writes the legislation. Yet without the fast-track authority, the Bush administration will have a tough time negotiating with its trading partners, who will be unlikely to concede sensitive points—and lose political capital back home—for a multilateral pact that could be revised by US legislators.

Business As Usual
In the meantime, most economists say the suspension isn’t having much immediate impact on the global economy as reductions in tariffs and subsidies agreed to during international negotiations usually are phased in slowly over a number of years. “It’s an investment in the future. It’s remarkable that the government that signs on to an agreement takes on the immediate pain from its constituents,” Hufbauer adds.

Yet one short-term danger of the stalled talks is the continued proliferation of bilateral and regional pacts that make it more difficult to negotiate the bigger deals that envelop all facets of the global economy, says Elliott. These bilateral pacts also can exclude the smaller developing countries from the growth that accompanies trade pacts.

Newfarmer says one of the stresses that could emerge if the round collapses would be a wave of protectionism and trade complaints. “The ongoing talks mute protectionist claims,” he explains, adding that a successful conclusion to the Doha Round is vital to the future of the rules-based international trading system.

“The World Trade Organization is a collection of rules for trading, and it’s a system of accountability for businesses and governments to follow,” Newfarmer adds. “To not conclude the talks would adversely affect this system. [Concluding the talks] also sends a policy signal to businesses that governments around the world endorse more open markets.”
While nobody expects a collapse of the Doha Round to send the global economy into a tailspin, the expansion of trade helps the global economy by creating new markets for countries’ exports and spreading the benefits of technology and productivity as domestic producers compete with imported products. “Trade brings along a high research and development content as well as increased efficiencies,” says Newfarmer. “There’s a greater openness that comes along with the technology and economic growth.”

And the longer-term danger of a collapse is simply how to keep the world trading regime moving forward. “This one was pared back and had a fairly limited agenda,” says Elliott, referring to the current round that began in Doha, Qatar, in 2001. “The system may be running out of steam as the rich countries don’t have that much to give, except on textiles and agriculture. But if we don’t have a system, what will be the constraint on countries? We need a new model, but I’m not sure what that is.”