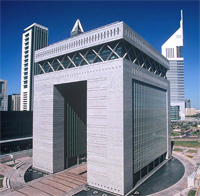 With its ancient caravan trails winding through the desert sands of Arabia, the Middle East is a fabled trade entrepôt between Europe and Asia. Now, as a modern form of Islamic trade finance blossoms there, world trade is accelerating in the region in which oil-exporting countries are enjoying strong economic growth and importing more goods and services.
Seeking to boost their trade finance activities in the region, more and more banks, including Western financial institutions, are introducing Islamic finance products for importers and exporters. Meanwhile, the Islamic Development Bank, or IDB, is setting up a $3 billion International Islamic Trade Financing Corporation in Jeddah, Saudi Arabia, to increase intra-Islamic trade, which it has always seen as crucial to development of the Muslim world. The IDB celebrated its 30th anniversary in January with a gala invitation-only dinner at the St. James Palace in London hosted by Prince Charles.

In the more than three decades since Islamic law, or Shariah principles, have been applied to modern-day banking products, Islamic banking has changed from a curiosity to a widely accepted form of economic behavior that some analysts say has the potential to become an alternative global financial system that would not include the threat of debt bubbles. The size of global Shariah-compliant assets has reached about $400 billion, according to Standard & Poor’s Ratings Services, and the potential market is $4 trillion, leaving plenty of room for future growth among the world’s Muslim communities.
The first stand-alone Shariah-compliant bank in the United Kingdom, the Islamic Bank of Britain, was established in August 2004. It is based in Birmingham, which has one of the country’s largest Muslim populations, and now has eight branches, including four in London. The bank offers a wide range of products, including savings accounts, term deposits, personal finance, home mortgages and business banking. Its shareholders comprise leading Islamic banks, including Qatar International Islamic Bank.

The advanced markets of both Europe and the United States offer niche segments in which Islamic finance could profitably gain momentum, according to a report by S&P; ratings analysts Anouar Hassoune in London and Emmanuel Volland in Paris. The two historical centers of Islamic banking in the Gulf region and Southeast Asia have just started actively talking to each other, the S&P; analysts say. The realization of a common conceptual framework that unites the approaches of Riyadh and Kuala Lumpur could go a long way toward enabling the Islamic banking industry to expand and diversify, they say. Several Islamic banks based in the Gulf have recently set up operations in Malaysia, with an eye to expanding elsewhere in Asia, particularly in China and India.

Islamic finance is a byproduct of the conventional financial system, whereby existing financial products are reconstructed to make them Shariah-compliant, says Khalid Yousaf, director of Islamic finance at IHG Securities, a branch of Dubai-based asset manager International Holdings Group. He previously developed the Islamic finance sector at the Dubai International Financial Center. “A McDonald’s Big Mac sandwich is prohibited, or haram, to Muslims as it is prepared in New York,” Yousaf says, “but the same product with the same components is acceptable in Riyadh when it is made with halal meat sanctioned by Islamic law.”

Using a form of reverse financial engineering, an existing financial instrument in the conventional system is broken down and rebuilt using equivalent components from the set of Shariah-approved instruments. The major advantage of this approach is the instant recognition and understanding it gets from the practitioners of conventional finance, according to a new book by Zamir Iqbal, principal financial officer in a department of the treasury of the World Bank, and Abbas Mirakhor, executive director for Afghanistan, Algeria, Ghana, Iran, Morocco, Pakistan and Tunisia at the International Monetary Fund. Their book, An Introduction to Islamic Finance: Theory and Practice, says that most Islamic trade financing is based on murabahah, a cost-plus-profit sales contract, whereby a financier purchases a product or raw material for an entrepreneur who lacks the capital to do so. The banker and the entrepreneur agree on a profit margin, often referred to as a mark-up, which is added to the cost of the product. The goods are purchased by the bank and resold to the borrower.

The payment for the transaction is delayed for a specified period of time. No forbidden interest, or “riba,” is involved.
More than half of the assets of some Islamic banks are invested in murabahah transactions. A majority of Islamic banks rely heavily on short-term trade financing instruments, according to Iqbal and Mirakhor. A second approach to financial engineering, they say, is to design instruments de novo from an established menu of Islamic instruments. The result would be a new array of instruments, each having a unique risk-return profile, bought and sold in specialized markets compatible with Shariah principles.

“Unless Islamic finance develops its own genuinely Islamic financial instruments, it cannot achieve the dynamism of a system that provides the security, liquidity and diversity needed for a globally accepted financial system, which would be a genuine alternative to the present debt-interest-based international financial system,” Iqbal and Mirakhor contend. A debt-based system needs an effective lender of last resort, the present international system does not have one, and it is not likely that one will emerge anytime soon, they say.

The Benefits of Sharing
Islamic banks also use profit- and loss-sharing partnerships, including musharakah and mudarabah, to finance trade. Under musharakah, a diminishing-equity contract, both the buyer and the bank put up capital. One partner buys out the other partner’s share over time. Mudarabah combines investment and management, whereby one party provides the capital and the other contributes the skill and efforts to make the transaction a success. Under these participatory forms of finance, banks are forced to become traders and to take possession of goods, something that conventional bankers would rather not do.

HSBC Bank Middle East, which provides trade services throughout the region, was the first international bank to introduce Islamic trade finance services for the commercial market. In 1998 it launched a series of murabahah products, branded as HSBC Amanah, replicating all conventional trade products, including documentary credits, bills for collection, open-account transactions, import finance and shipping guarantees, in a Shariah-compliant manner. Amanah means “trust” in Arabic. HSBC Bank Middle East and its associates, the Saudi British Bank, or SABB, and the British Arab Commercial Bank, have a presence in 12 countries in the region.

SABB, based in Riyadh, has developed its own local trade services and also has adopted products from HSBC. The Amanah import letter of credit was the first product introduced, followed by Amanah import loans. Approximately 22% of SABB’s trade volumes are routed through Amanah products. SABB has the distinction of being the first bank in the world to enable the issuance of import letters of credit through its electronic banking service.

Samba Financial Group was a late entrant to the Islamic banking market in Saudi Arabia but now has a top-three market share in the kingdom. The bank has three main trade operations centers, in Riyadh, Jeddah and Khobar. By offering both Islamic banking as well as conventional trade products, Samba Financial is able to meet the specific needs of its customers and offer them a wider choice. Local banks that have a deeper understanding of the sensitivities and requirements of their specific market claim to have an advantage over the international banks in introducing new Islamic financial products.
Al Rajhi Bank, also based in Riyadh, is the world’s largest Islamic bank, with about 600 branches in Saudi Arabia. It is the first Saudi bank to operate in Malaysia, where it plans to have about 50 offices in five years.

Dubai Islamic Bank, based in the United Arab Emirates, the first fully-fledged Islamic bank, was founded in 1975. In December 2006 it launched Al Islami Land Trading Finance, a Shariah-compliant structured finance product designed for UAE nationals engaged in buying and selling land in Dubai. Also in December, Dubai Islamic Bank launched a record $3.5 billion sukuk bond for the government-owned Nakheel Group, the holding company for an investment bank and property finance company. Sukuk are financial participation certificates that comply with the Islamic law prohibition on paying interest.
The Nakheel Group’s sukuk was the first of its kind in that it included an equity-linked structure. “The fact that investors from across the world participated in this sukuk is a manifestation of Islamic financing instruments gaining popularity,” says Saad Abdul Razak, CEO of Dubai Islamic Bank. The bank is one of the world’s leading sukuk underwriters. Islamic finance is the fastest-growing sector in the global financial services industry, he adds.

Joining the Mainstream
Standard & Poor’s currently rates more than $5 billion of the $10 billion market for listed sukuk, which the ratings service expects to grow to $20 billion by the end of the decade. In the Gulf region, investing in sukuk has become part of mainstream asset allocation and diversification, particularly for Islamic banks, according to S&P.;
Islamic bond volume totaled more than $7.3 billion in the year-to-date through December 19, 2006, an increase of about 12% from the same period a year earlier, according to Dealogic. Abu Dhabi Islamic Bank’s $800 million sukuk, priced on November 30, 2006, through HSBC Amanah, was the third-largest Islamic bond on record. The issue was originally planned for $400 million to $500 million but was increased due to strong demand from investors, nearly 40% of whom were based in Europe.
Malaysian issuers dominated the Islamic bond market last year, with $5.6 billion of volume as of December 19, an increase of 31% from the same period of 2005, Dealogic says. CIMB Islamic, based in Kuala Lumpur, led the 2006 year-to-date bond volume and revenue rankings, according to Dealogic.

The Malaysian subsidiary of Bank of Tokyo-Mitsubishi UFJ, part of Mitsubishi UFJ Financial Group, is teaming up with CIMB to offer a range of financial services, possibly including sukuk for Japanese corporations. The strategic alliance covers broad collaboration, including conventional and Islamic investment banking and cash-management services.
Kuwait Finance House, one of the world’s largest Islamic banks, has been operating in Malaysia since 2005. Late last year it launched a $200 million Islamic bond issue for a Chinese power company. It also is arranging financing for infrastructure projects in India, Indonesia and Pakistan.

As long as oil prices stay high enough to keep petrodollars pouring into the Middle East, the region will remain an attractive source of financing for trade and other ventures worldwide.