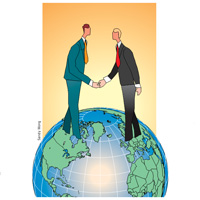 Merger Boom Likely To Continue In 2007 Despite Increased Scrutiny of Cross-Border Deals
Worldwide mergers and acquisitions announced in 2006 rose 38% to a record $3.8 trillion, according to Thomson Financial, and the fast pace of M&A; activity is unlikely to let up in 2007, analysts and chief financial officers say.

“There is a continued strong M&A; climate in the US and Europe, where companies are trying to extend their footprint by buying competitors,” says Robbert van Batenburg, head of global research at New York-based Louis Capital Markets. Companies also will continue to make takeovers to secure sources of commodities, he says.

However, with the Democrats now in control of the US Congress, it could be more difficult to get foreign acquisitions of US companies approved, van Batenburg says. There likely will be increased protectionism and scrutiny of cross-border mergers, he says, similar to last year’s dispute that forced Dubai Ports World of the United Arab Emirates to abandon its plan to take over the operation of major US port terminals.

Some 92% of CFOs from 1,400 US companies said they think corporate M&A; activity will increase or stay the same over the next 12 months, according to a survey by Menlo Park, California-based Robert Half Management Resources. Only 2% said they expect M&A; activity to decrease, while 6% said they didn’t know or had no answer.

The greatest amount of merger activity in the United States is likely to take place in transportation and finance industries in the next two to three years, according to the CFOs polled.

“Relatively low interest rates and deep cash reserves within many companies are prompting firms to make strategic acquisitions,” says Paul McDonald, executive director of Robert Half Management Resources. “The complex nature of the merger and acquisition process is driving the need for financial executives knowledgeable in this area,” he notes. Senior financial analysts with specialized M&A; experience in conducting due diligence, analyzing financial data, developing competitive forecasts and assisting with tax-compliance issues are all in demand, he says.

Private Equity Deals Abound
Private equity firms contributed to the rise in M&A; activity in 2006, as deals with buy-side financial sponsor involvement announced during the year rose 20% from a year earlier to $758 billion, according to Thomson Financial. It said the growth was mainly the result of increased financial sponsor activity in the US, where the volume of such deals totaled $415 billion, or 26.5% of overall US M&A; volume.

The macroeconomic environment is ripe for leveraged buyouts, given low treasury yields, tight corporate spreads, ample liquidity in the leveraged-loan and high-yield bond markets and the rapid growth of private equity funds, says Chester Luy, a member of the US credit research team at Barclays Capital. “With corporate earnings growth expected to slow in the coming quarters and organic growth potentially more challenging in a slowing macro environment, management may choose to use M&A; to cut costs and expand operations, particularly given the amount of cash on corporate balance sheets,” he says.

Cross-border M&A; has also increased in recent years, as weakness in the dollar and the ability of foreign companies to gain a foothold in US markets have made US companies attractive to foreign buyers, Luy says.

Finance Sector Targeted
Barclays Capital expects M&A; activity among financial institutions to remain high this year. “In our view, the acquisition of entire companies, along with the sale and purchase of individual business units, is likely,” Luy says. Although the volume of such transactions will be large, in most cases these deals will be neutral to positive for credit ratings, with larger, more diverse and more well-capitalized companies emerging, he says. Consolidation is also likely in the insurance industry, especially in the life insurance and annuity sectors, he says.

There was considerable M&A; activity in the energy sector last year, which is likely to continue in light of tight energy markets, record levels of cash on balance sheets and considerable appetite for new debt among investors, according to Luy. The pace of M&A; will likely slow among the regulated utilities, however, because the process for approval of such takeovers has been difficult in the US, he says.

Commercial banking M&A; activity worldwide rose 34% last year to a record $382 billion, according to Dealogic. The average deal size was $703 million, an increase of 22% from 2005. Cross-border activity in this sector accounted for 28% of the total. France was the most active acquirer in the commercial banking sector in 2006, with a volume of more than $26 billion from 25 deals, and Italy was the most targeted nation, with $20 billion of takeovers from 12 deals, Dealogic says. The largest commercial banking merger of 2006 was Banca Intesa’s acquisition of Sanpaolo IMI, creating Italy’s largest bank in a deal valued at $38 billion.

Europe Sets Record
European-targeted announced M&A; of all types rose 41% in 2006 from a year earlier to a record of nearly $1.6 trillion, according to Dealogic. The UK was the most targeted European nation, with a volume of $369 billion, followed by Spain with $191 billion and France with $174 billion. Eastern European announced M&A; volume increased 25% last year to a record $184 billion. Finance was the leading industry sector for M&A; activity in Europe in 2006 with $231 billion in deals, more than double the total for 2005.

The revised takeover offer for Endesa of Spain by E.ON of Germany, valued at $65.5 billion, was both the largest European deal of 2006 and the largest transaction on record in the utility and energy industry, according to Dealogic.

M&A; activity will remain the main theme in European stock markets in 2007, says van Batenburg of Louis Capital Markets. Forthcoming changes to the Spanish takeover law and a planned reduction in the capital gains tax may benefit the Spanish market, he says. Consolidation in Spanish utilities and telecom sectors, as well as in Italian banks and the metals and mining industries, will create takeover targets, he says.

“Private equity will continue to be active,” van Batenburg says. “The amount of money to be deployed will result in a modern-day gold rush for assets.” In order to avoid a potential backlash, private equity firms are becoming more politically astute and are making more donations, he explains.

Creating Champions
“A national champion syndrome is plaguing the European utility sector,” van Batenburg says. The French government in February 2006 announced plans to merge former gas monopoly Gaz de France with Paris-based power and water utility Suez to deflect an expected bid for Suez by Italian power company Enel. “France is making every attempt to prohibit cross-border mergers targeting its own companies,” van Batenburg says. “It might get away with this once or twice, but eventually it will have to give in,” he says.

The opposition Socialists could reverse the privatization of Gaz de France if they win elections in May and June. Ségolene Royal of the French Socialist Party is running against Nicolas Sarkozy of the Union for a Popular Movement, or UMP.
France’s Constitutional Council has postponed the completion of the Gaz de France-Suez stock-swap transaction until at least July 1. The deal values Suez at more than $60 billion. The council approved the opening of France’s energy market to competition, agreeing to apply European directives.

A UMP victory would generally be favorable to business and the overall investment climate in France, since Sarkozy has proposed deficit reduction and tax reform, van Batenburg says. “A socialist victory would likely favor further support for national champions and perhaps an attempt to re-nationalize [aerospace group] EADS,” he says.

As Global Finance was going to press in mid-January, the banking foundation shareholders of Intesa Sanpaolo were putting the finishing touches on a shareholders’ agreement and a consultation pact to improve ownership stability of the merged institution. The four foundations comprise Compagnia di San Paolo, Cariplo, Cassa di Risparmio Padova e Rovigo and Carisbo. They were seeking to form a shareholders’ pact representing about 20% of the new bank’s capital. The agreement would give members of the pact the right to preempt the sale of shares by other members.

“M&A; scenarios are exposed to numerous risks, such as strategic shareholders that have a blocking vote, rejection by national governments or antitrust authorities, as well as local courts,” according to van Batenburg. “In addition, M&A; scenarios are dependent on the performance of specific companies and, therefore, are exposed to stock-specific risk, such as disappointing operating performance, risk of increased competition and deterioration in economic conditions,” he says.

Hostile M&A; activity targeting companies based in the Asia-Pacific region totaled more than $64 billion in 2006, a five-fold increase from 2005 and the highest on record, according to Dealogic. Australia was the most-targeted nation in the region, with a volume of nearly $30 billion, followed by Malaysia with $11.1 billion and South Korea with $9.3 billion. 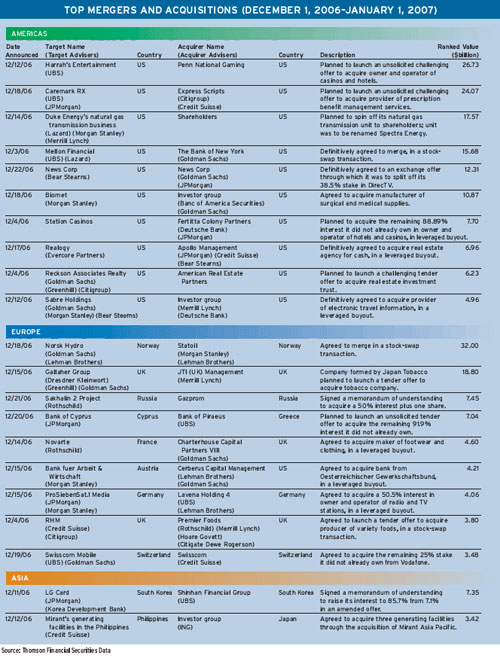