The dollar could extend its recovery through the first quarter of 2010, as the Federal Reserve terminates some of its special lending facilities, analysts say, but the greenback’s long-term declining trend likely will reassert itself later in the year, they add.

“The dollar was oversold in 2009, and its prospects are good for the next few months,” says Brendan McGrath, senior foreign exchange trader at Custom House, a global payments firm, which is a subsidiary of Western Union and is based in Victoria, British Columbia, Canada. “The US deficit problem will be the prevailing negative story for the dollar as the year progresses,” McGrath says.

The dollar in recent weeks has begun to respond favorably to positive US economic data, and market sentiment seems to be moving away from the “risk-on, risk-off” trade, according to McGrath. From March through November 2009, when the dollar tumbled to a 16-month low, it did so against a background of improving economic news. The dollar’s safehaven status was cast aside, as investors sought higher returns on riskier assets than treasury securities. For most of 2009, the dollar fell when the stock market rose. Now, the oscillation between the extreme forces of risk aversion and risk acceptance appears to be waning, McGrath says. “This is a sign that the markets are normalizing, although we are not there just yet,” he says.

Once inflation returns and interest rates start rising, the markets will return to a more normal condition, McGrath says. Record low and stable monetary policy has resulted in commodities and equities playing a bigger role than they normally would in determining market direction, he points out. “Interest rates will be the key pricing determinant to currencies in 2010,” he adds. “Rates will be the big story, and they have only one way to go, which is up,” he predicts.

The Federal Reserve will take its time and wait until it sees inflation developing before it raises rates, McGrath says. “If inflation is not there, the Fed won’t have to act,” he says.

Meanwhile, central bankers around the world will continue diversifying their foreign exchange reserve holdings and lessening their dependence on the dollar, but this will not become a front-burner issue this year, McGrath says. “The dollar still will be the world’s reserve currency,” he says.

After correcting for currency valuation effects, however, the data told a very different story, according to Steven Englander, chief foreign exchange strategist for the Americas at Barclays Capital, who is based in New York. The incremental dollar share among countries that report allocated reserves by currency rose to 62% of the increase in reserves in the third quarter, up from 37% of the increase in the second quarter, Englander says. The incremental share for the euro fell to 20% in the third quarter from 55% in the previous quarter, he says. The incremental share for the yen fell to 2% from 12%.

“Our main takeaway from the third quarter is that central banks are unenthusiastic about any of the three major currencies [yen, euro and dollar] at the valuations that prevailed in the third quarter, and their diversification into small currencies probably represented a significant part of the [upward] impetus these currencies experienced,” Englander says.

Dennis Gartman, editor and publisher of the Gartman Letter, a Virginiabased advisory service, says the dollar has undergone a watershed shift in trend and is now heading on a longterm upward path. The dollar’s strength is most notable relative to the euro, he says. “The monetary authorities in Frankfurt are considering tightening in the not-toodistant future, and the political authorities in Athens, Madrid, Lisbon, et al. are collectively screaming ‘No!’as their economic fortunes seem anything other than strong,” Gartman says.

There has been an ominous topping out in the yen/euro cross, or the value of the euro in terms of yen, in the past several months, and there is a strong correlation between the cross and the movement of global stock markets, according to Gartman. The yen/euro cross is a measure of the world’s appetite for risk, he says. It rises when stock markets rise and falls when stock markets fall. This reflects the role of the yen in the carry trade. When risk appetite is high, speculators around the world aggressively borrow yen and invest the proceeds abroad. In the process of borrowing yen, which are then sold for investment elsewhere, the cross rises as the yen weakens. When it comes time to unwind risk, the yen is repatriated, taking the Japanese currency higher versus the euro, Gartman says.

Dollar strength could be spurred on by the anticipation of an exit from the Fed’s quantitative easing policy in the first half of 2010, according to currency strategists at Deutsche Bank in London. But a longerterm rise in the dollar could be difficult to muster, they say, because the early stages of actual Fed rate increases tend to be associated with dollar weakness. Moreover, although the US current account deficit will likely be relatively stable over 2010, the direction of risk capital toward the US is still uncertain, the Deutsche Bank strategists add.

Michael Woolfolk, senior currency strategist at BNY Mellon, says the dollar is likely to come under further selling pressure during the first half of this year, with increasing dollar strength possible in the second half, as Fed tightening looms large. Any strength in the dollar early in 2010 could be related to a strong seasonal deployment of new funds from overseas into US securities, he says. This newfound strength in the dollar may prove not only illusory but also downright misleading, he says. 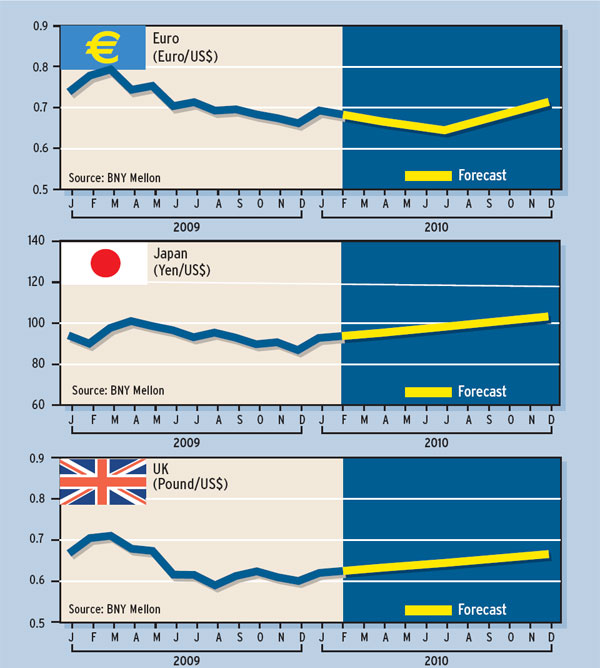 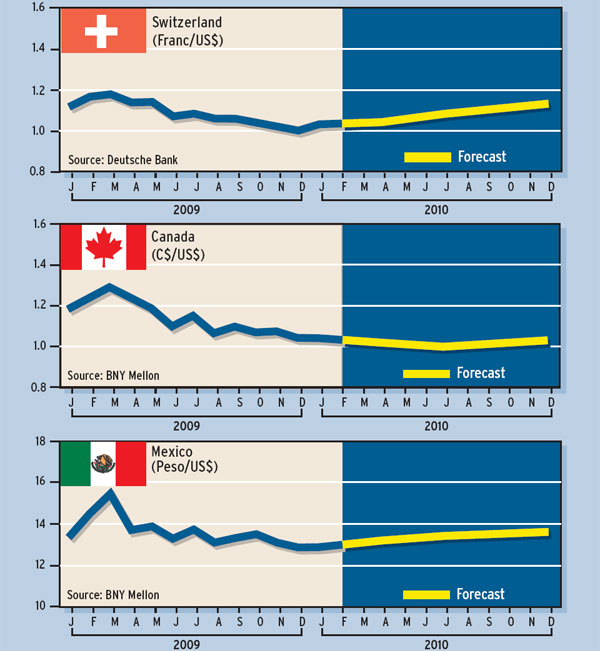 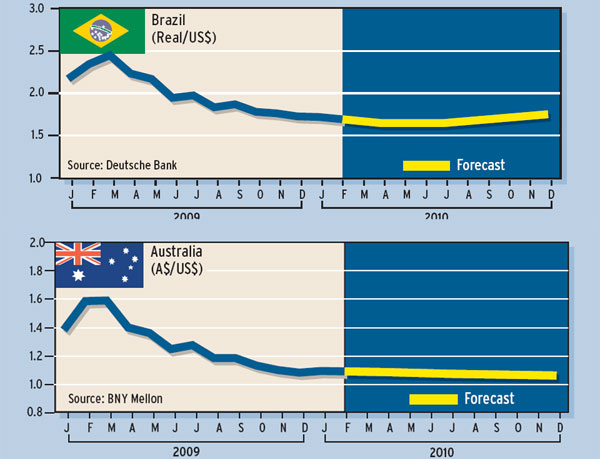 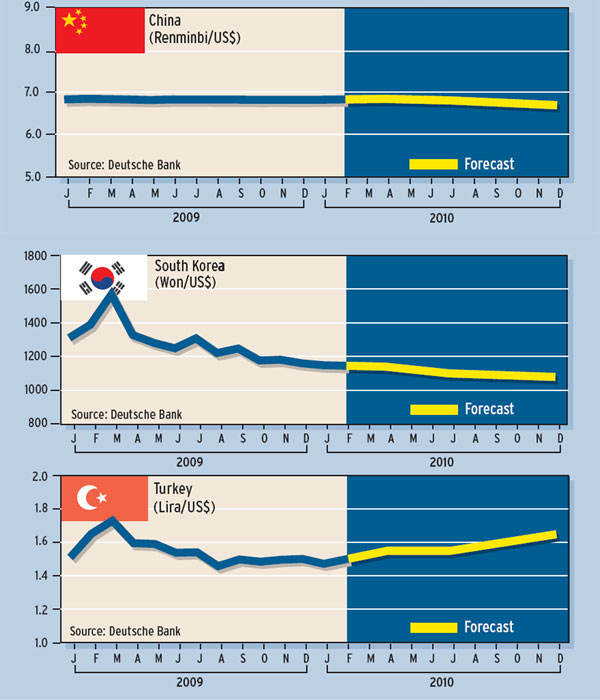